Further, new railway station building was constructed, and the whole infrastructure was improved. Dusty factory halls were substituted with modern glassed buildings. Moreover, Lisbon could be proud on the greatest European oceanium!

The town, as  known from books only

In Belem Quarter, you can find nearly all sigtseeings described in standard travel guides. Not far from famous Tejo-river (nicknamed as Straw Sea), you can admire white buildings of St. Jeronimus Monastery of 16th century. Inside, there are to be found the tombs of Portuguese Kings, such as Manuel I. and Manuel III as well as John III., and you can also discover there a tomb of seafarer Vasco da Gama or writer Luis Vaz de Camoes. Further, inside Monastery area, so called Lisbon Treaty was signed in December 2007. The whole complex is registered in UNESCO Heritage Survey. All these buildings, together with Belem Tower (Torre de Belem) outlived big earthquake, fires and tsunami destructing wave in 1755. 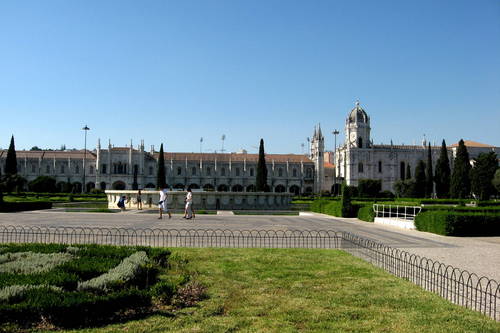 When to the prison, so Belem would be the best!

Belem Tower (Torre de Belem) is also registered in UNESCO Heritage Survey. This ostentatious white construction is sticking out in waters of Tejo-river just since 16th century. It is a symbol of a point, from where famous seafarers set up for unknown distances. The tower was built as Lisbon triumphal arch and as a monument of Vasco da Gama legendary excursion at the same time. This man left the continent from the same beach to free sea, in order to try to discover India. The tower is 35 metres high, and it is equipped with foure stores. In past, the construction served as a jail or lighthouse, and its character was specificated as defensive. Thanks to rich Moorish decorative art, and, maybe, romantic white colour, the building does not remind a prison at all. The Portugueses arranged this construction to seven wonders of Portugal. On the other hand, the similar symbolics has discoverers´ monument, situated hundreds of metres only from Torre de Belem. 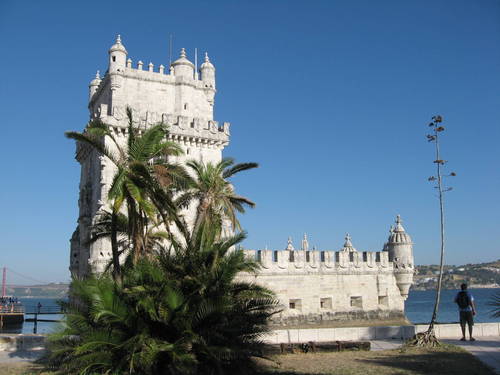 On the opposite bank of Tejo-river, a gigantic statue of Jesus Christ is placed. It is 28 metres high and it is illuminated with blue colour shade during the night. The statue belongs to the three greatest Jesus Christ statues of the world. It is jutting out closely above the bridge which surprisingly reminds famous Golden Gate Bridge construction of San Francisco. Nevertheless, the explanation is quite simple. Both bridges were proposed by the same architect, however, he obviously lost his phantasy here in Portugal. At present, the bridge is full of vehicles all the time, later even the train passed both banks, and so Lisbon was joined with the opposite quarter just since 1960. Nevertheless, at that time, the bridge was named according to Antonio de Oliveira Salazar, local dictator (Ponte do Salazar). 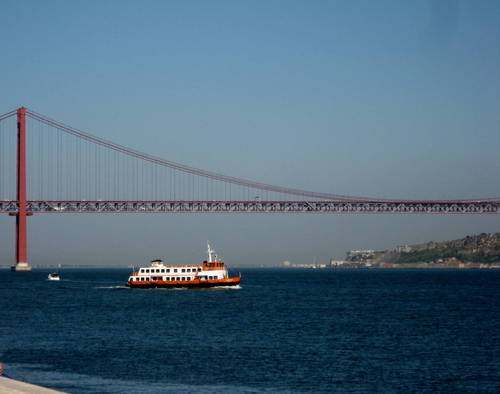 After so called „Carnation Revolution“, which was effected in Portugal at the end of April 1974, and this hot country obtained its freedom again, the Portugueses named the bridge as „The Bridge of 25th April“. Anyway, some non-politician Portugueses name the bridge simply - as the bridge across Tejo-river. On the other hand, the name Golden Gate could be confused, first of all for foreigners. There is existing another bridge - Vasco da Gama Bridge - cutting the river in one of its widest points. This bridge is the longest in Europe, its length makes 18 kilometres.

The President with human face

In Belem, a couple of metres from famous Pasteis de Belem confectionary, mentioned on our previous article (chapter), is a home of Anibal Cavaco Silva, the President of Portugal. But, frankly speaking, this residence is nothing so ostentatiuous as Prague Castle. It is true that a Head of Portugal lives in nice house in luxury quarter, nothing more. As the only difference - it is a barriere in front of the gate of Belem Palace and a guard, doing the same as another guard, it is regularly changing within certain time period. But this guard does it without any fanfares and unnecessary foolish tricks, bearing their sun-glasses only. 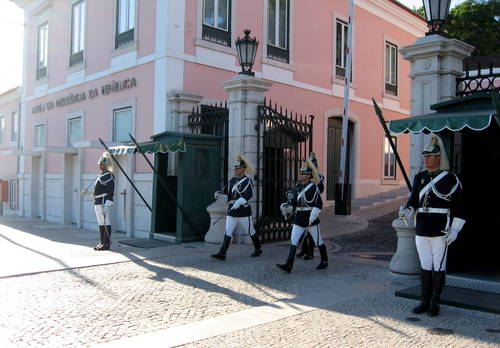 Do you have trouble with your legs? No problem, would you wait for lift, please!

Luxury view from height of 32 metres towards Lisbon Castle, ancient small streets or Roisso Square, all this is offering an elevator Santa Justa in Baixa Quarter. This completely iron construction of 1902 belongs to the samples of variegated Portugal architecture. As the only exception, these are two wooden lift cabins. Each of them could occupy more than twenty curious tourists. Another unique circular view of the town is to be offered also from Sao Jorge, Lisbon Castle. 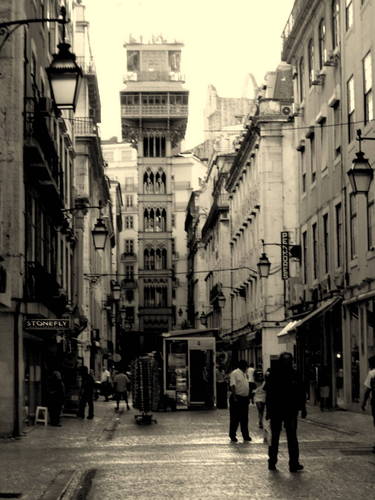 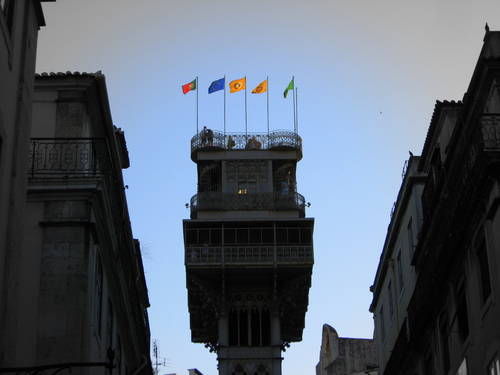