Published: 19.2.2008
Lužické Mountains are small, a little forgotten mountain range in north of Bohemian basin. Its height is not enormous, there are no ski resorts, but these mountains are very interesting in summer, in spring as well as in autumn are full of various colours.

When the winter season is favourable (however, this is not the case of last as well a

s this year), the terrains for ski-running are excellent, in spite of the fact that you find here also sharp mountings and steep descents. As the starting point could serve the town of Nový Bor (where we arrive also by train), or Jablonné v Podještědí (not far from Liberec), from north from Varnsdorf and Zittau (Germany). The height of hills is moving between 500-800 m, unfortunately the snow covering is not available everywhere. The hills remind cones, are rugged, many rocky formations add the hills its extraordinary position, you find here some ice-cave or mountain-dam, so there are plenty places of interest.

Near to Nový Bor (town of glass-workers tradition, you find here less factories as before, anyway, the works are smaller and in private possession, but you are welcome on the ocassion of guided tours) juts out the hill of Klíč (759 m). Local tourists make regularly – always on 1st January – the mounting to the top. From Klíč hill, we can continue, via community of Kytlice to Chřibská, and we find now in Elbe-Sandstones Area. A romantique railway-line between Nový Bor and Chřibská leads through this valley. From railway stop Jedlová we can mount to the second highest peak, Jedlová ( 774 m), and further to the highest hill, Luž (793 m, German name Lausche) in the eastern direction.

On slopes of Jedlová and Luž, we find in winter descent routes with towages, and in case of s

ufficient snow covering, the ski-terrain is not easy. From Jedlová we can see, in northern direction, the towns of Varnsdorf and Krásná Lípa. Near to these towns, the river of Křinice springs here, flowing to Elbe-Sandstones Area. On the contrary, from Luž, placed on the border, we have a view to Zittauer Headland in Germany.

We find in this area some castle-ruins, such as Milštejn, Rousínovský hrádek, Tolštejn, but also some rocky formations-as Pětikostelní kámen, Vrabčí skála or Trojhran. As usually, each such place is connected with some legend. From Pětikostelní kamen (Five Churches´ Stone) you see towers of five churches in the surroundings (in fact, you see only four towers – in Jiřetín pod Jedlovou, Dolní Podluží, Studánka and in Křížová hora).

From Luž hill, you can continue in southern direction via community of Krompach. The further expressive dominante forms Hvozd (Forest Hill) with look-out-tower (placed directly on the border). You can go down in direction to the community of Petrovice, or continue to Hrádek nad Nisou.

The ways in the north lead in Germany in the surroundings of Zittau. In case of favourable snow conditions, therte are good snow traces available. Near to Jonsdorf-spa there is rocky area, with Oybin Hill with extensive castle (former ownership of Lipá Parentage). Now, it is an imposant rocky castle under reconstruction. You have to pay entrance fee, but you receive the local digestive-speciality „Oybin bitter“. This place is nice in every year period, but you enjoy the atmosphere better in spring or summer.

Anyway, on Bohemian part we find also rests and ruins of small castles, such as Loupežnický hrad

(Robber´s Castle) and Starý Falkenburg. And, of course, very preserved castle of Lemberk (between towns of Jablonné v Podještědí and Rynoltice. Near to the castle, Zdislava fountain is situated. According to the legend, this water has healing effects.

Now, we reach Ještěd range, divided from Lužické Mountains by Lužická Nisa-river. In past, the whole region was (including a big part of  today´s Saxonia) a Slavonic dominion – Serbian Lusatia. In this region lives a small populated nation of Lusatian Serbs, placed in today´s Germany. 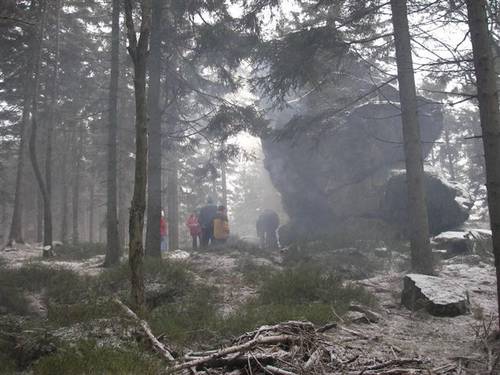