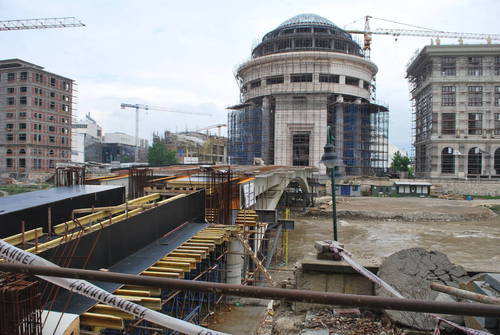 I thought that once, when all construction work completed, it will be here for it not a pretty sight. Now, I could not say it certainly.

I came by bus, that cost hundred denarii, to the Holiday Inn hotel in the morning, after a night at the airport without a backpack, which didn’t come. I immediately set off the map, which I bought in the airport stall, towards the centre. I walked cross job site on the banks of the Vardar, when some man started to speak with me - apparently builder, asked me, if I am going to work. I said not, and he laughingly pointed the way to the square Ploštad Macedonia. 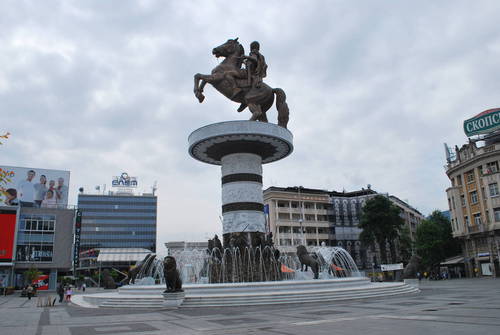 There was another world, another Skopje. As I came to the square, I heard playing Mozart in the air and after a while I opened up the space with a huge fountain, which was dominated by a statue of a rider on horseback, mounted on a pole richly decorated with war scenes. Alexander the Great, whose statue personifies fact, surrounded by warriors and toward them lions spout water. Moment by moment was changing multiple streams of wate

r, which creates a pleasant spectacle. The scene reminded me Křižík fountain in Prague, whose "performance" I was only to visit only once, when I was a child.

About this statue was lots of discussion. Although it doesn’t seem, it is only year old. It was built in 2011 and soon was subjected to sharp criticism from Greece, which called it clear provocation. The dispute over the name Macedonia of Alexander the Great as well as stretches for years (since the collapse of Yugoslavia) and as you can see, unfortunately, is not yet over.

I walked across the bridge to the other side of the river and went through the picturesque streets of the old city. It was still quite early and so only occasionally peeked out from one of the shops and charming Macedonian trying to do business with me. But I did not want to buy anything, so I kept walking on, towards the Kale fortress and then back, around the statue of Saint Cyril (or Kiril) and Methodius, the newer part of town. I went through a street full of shops, restaurants and antique street and arrived at the house of Mother Teresa that interested me, because architecturally fascinated me. I took the picture it, including details of white doves on a blue background, stone walls and also statue of Mother Teresa and walked away. 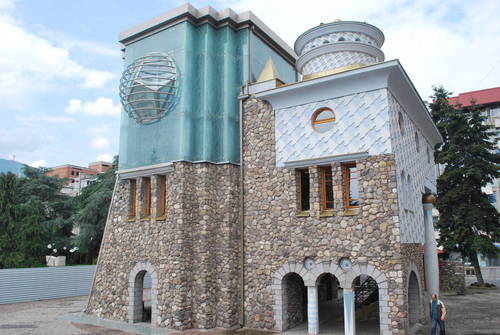 My destination was a hill with large iron cross that rises above the city. The hill is called Water and off to a height of 1066 m above sea level First, there must be the place to go or medium water, where you can either continue on foot, or very modern and luxurious cable car up. I am the way to the top chose my legs, though badly shod (sports shoes were in my cradleboard somewhere in the air). Despite blisters, which I created for the trip, I regret that, down but instead I had to ride a cable car and then stop. I enjoyed the trip, because he was my first Macedonian hill. 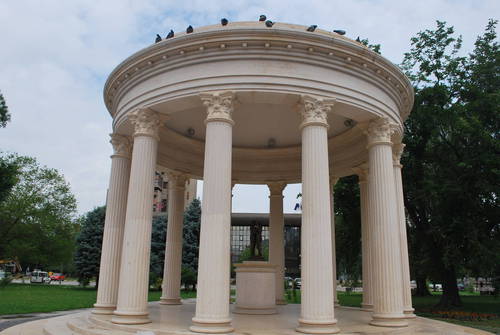 When I came back, I had a dinner and after departure by bus to Ohrid where I should spend the following week. Skopje is a nice and interesting city, full of statues, churches, mosques and other monuments at the time of my visit were unfortunately largely hidden under scaffolding. The visit would certainly stand to be a Turkish bath, the Church of St. Dimitri, Mustafa Pasha Mosque and other places, which the paper guide attracts. So other time...