Several times I could see how from the storm cloud in one part of the lake water shreds fall to the surface, while in other parts of the lake is calm and plays almost all shades of blue.

Ochrid lake is called the pearl of the Balkans, and I would say the nickname is fitting. This remarkable lake covers an area of ​​348 square km, the length is 30 km in width and up to 15 km. It lies at an altitude of 695 m and over it rises on all sides by more than two thousand meters high mountain, which gives it a more attractive and photogenic. It's a lake of tectonic origin that is situated in a tectonic depression. Thanks to the significant depth of nearly 300 m can be proud of its primacy. It is the deepest lake in the Balkan Peninsula. It is also a border lake, separating himself from the two states - Macedonia and Albania, while Albania is approximately 1/3 of its coastline.

Water in the lake is incredibly clear. It is transparent up to 22 m depth. When I examined from the boat, what is possible to see, I did not have much luck - I just saw a few small fish. Unfortunately I have not seen Ohrid trout, which is one of a number of endemic species living in this lake, the old 3 to 4 million years ago. 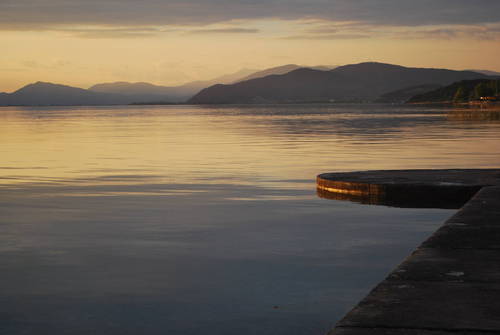 It is interesting the way how the lake supply with water. If I forget water from rain, I´m talking about tributaries. They lead because its way through the underground karst mountains Galicica relief. Water comes from a lake - Lake of Prespan, situated on almost 150 meters higher and flows into groundwater, limestone cavities. If there was indeed an extremely long period of drought, it could be that Prespan lake dries up completely, while Ohrid is still full of water.

When I spent time on the shores of the lake, I also would like to have a bathe there. But I forgot my bathing suit and was not very suitable for my business trip drop inhibitions and swim without them. Even the water temperature in late May was not quite ideal. I would guess for 16 ° C, maybe a little more. In summer, the lake water temperature is between 18 and 24 ° C, it is perhaps just a little friendlier. At least my legs but in Ochrid plunged several times and I must admit that it made me really well.

I can´t say that I registered on the lake busy shipping traffic. Some, but he still is. Can be observed as the larger cruise ships and small metal boat, which I saw a large number of mainly along the banks of the lake. I saw them and then "parked" at the houses in the mountain slope Galicica. They had different colours, most of which I liked a combination of white with navy blue. It is on such a boat would have liked me to go, but even on a cruise ship on which I was lucky enough to stay a total of just over an hour on the way to the church of St. Naum and back, it was not all bad.

Ohrid Lake is simply a gem of Macedonia. Therefore, to its resorts, especially in the same town, heading off Macedonian, but also German tourists as if they went to sea. I also enjoyed fully the transcendent peace that radiates from that place. 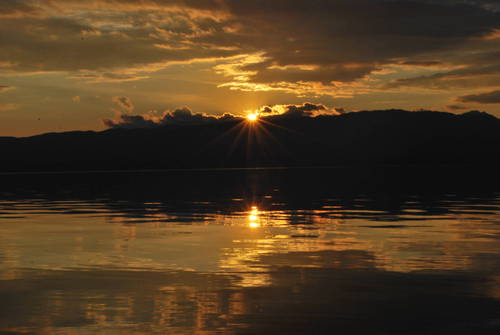