man) tourists, with the same name as a lake, near whose shores is located. Ohrid is famous for many things, eg. it used to be the seat of our followers known Cyril and Methodius - Kliment and St. Naum. St. Clement was the first archbishop and founder of the Ohrid Literary School became Ochrid patron. The remains of the saint are now stored in the church of St. Clement and Pantelejmon.

Although I lived in a hotel near the lake, to Ohrid it was quite far by walk. When we decided with my friend to visit this city, we had to either take a bus or try hitchhike. We chose the second option and it was a good choice, since the trace in Macedonia is really easy. Macedonians are a nation very pleasant and a joy to travel with them. I never even happened that I came out on the street and just a few seconds later I stopped first car that drove by. Here, yes. 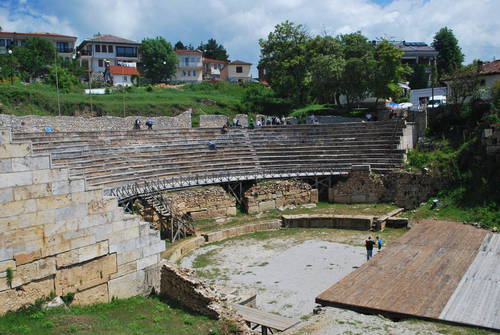 On our first visit we headed to the walls that separate the city from the surrounding town historical centre. We entered the gate and came to the picturesque streets of sacred building in which it was possible to buy a tour of the icons in the interior. Price for foreigners was twice that for the local, which is how I noticed a common phenomenon in most of the local sights, to which admission is paid. Tour Options of icons we missed and we went on. 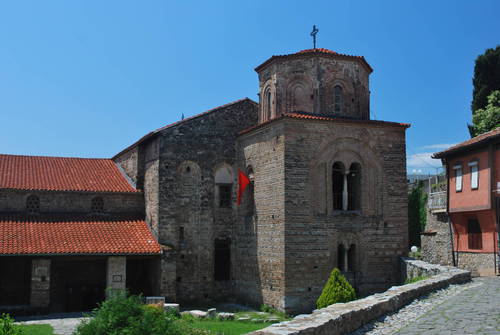 We came to the Roman Amphitheater, one of the oldest and probably the most visited monuments in the present of this city. From there we went to Church Sofia. The church, čoudícími scented incense and rich in unique murals of saints, including the images of St. Cyril and Methodius, had a pleasant atmosphere. It was obvious that the murals in the interior would urgently need to restore, otherwise it will soon disappear under the weight of time. Many of them were unfortunately not so faded that it was difficult to know what to show.

From the church we went to the waterfront. We walked around the metal boat, where the cat was climbing, and came to the commons with benches and view to the lake. For the moment we refrain, and then we went on a wooden walkway leading along the rocky coast. This place, like the entire Ohrid Lake and its surroundings, appeared to us as the seaside resort. Just the smell of salt on air was missing there. From the coast of Ohrid was to see another church - the Church of St. Joan Kane of 13th of century, which is built on a cliff above the lake. 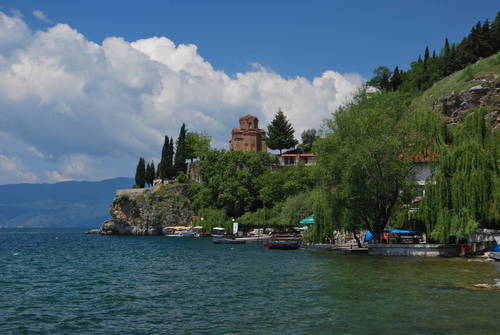 Ohrid but doesn’t mean just a monuments. On the main street and surrounding streets there are many souvenir shops, especially with the jewelry. The local specialty is so-called the Ohrid pearl, made of scales Ohrid trout. You can find also the store full of famous Macedonian wines, especially the "black" wine Vranec which has a unique flavour. Also noteworthy is the local market where you can buy fresh fruits and vegetables, spices and other goods.

On the end of our visit, when we moved along the coast back to the main road to hitchhike back to the hotel, we had to face each moment offers sailors, who offered us a boat trip on the lake. On the shore and in boats on the lake, for the arrival of potential customers, were waiting the crowd of them.