Inside, we unfortunately did not get, because the church was not open. On the way back we met a goatherd and an old grandmother. With both of them, we exchanged a couple of Czech-Slovak-Macedonian (my friend is Slovak) words. They both smiled at us and were incredibly welcoming. I think friendship is perhaps characteristic of almost all Macedonians. 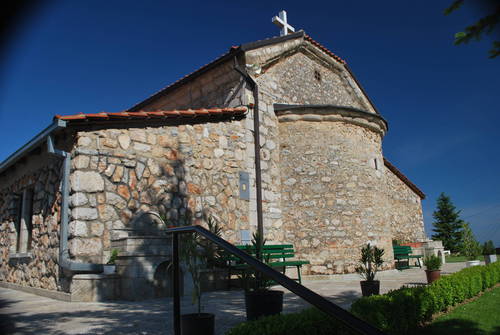 The next day we decided to climb into the mountains. This time we had to use hitchhiking far from our hotel. We stopped a group of workers, and they took us under Elšani village, which was the starting point for our trip. The village was also a church. It was nicer than we saw earlier in the day Konjsko. Gardener greeted us and immediately began to take care of us. But he couldn’t leave us to go inside, because he had no key. He said we have to come another day, when they have worship. Near the church was a stylish cemetery with overlooking to the lake. This way situated cemetery induces a peaceful atmosphere. I stayed a while among the graves, looking at the cross and photos of the deceased and imagining their stories.

In the village we visited except the church a cemetery with a small food store. My friend wanted to buy there a sunscreen, but unfortunately failed. Water and other essential needs, but the store had, so we bought it at least. The salesman tried to talk to us in broken German. You can see what the nationality of tourists they are accustomed. 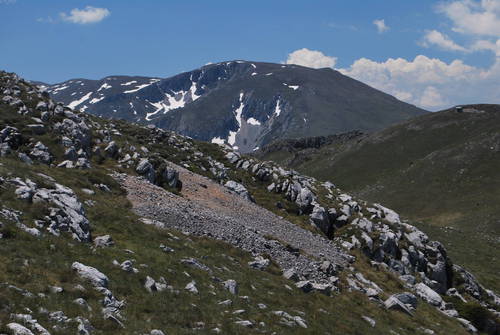 After we went from the village, we waited long, but pleasant climb cross the trees, or the meadow with rocky protrusions. Once we came out of the woods once, we would expect that we move the boundary at high altitude and we will have to wait just a bare mountain plateau. But it was otherwise, forests changed with space without trees quite illogical for us. After some time, but still we just came out of the woods for good, and here we have just endless beauty surrounding mountains, rocks and lakes of Ohrid on one side and Prespan one on the other. In some lower spot still held snow.

We went to several peaks with the dimension just under two thousand meters and we had a pleasant breeze that played with us. When we look at the mountain-filled and both lake that separates them, we began to descend to a saddle below Mount Magar, who is the second highest mountain. This mountain was originally our goal for the day, but when we descended to the saddle, we began to move to the next output morale. When we reached the saddle, has quite vanished, and we decided to go down. 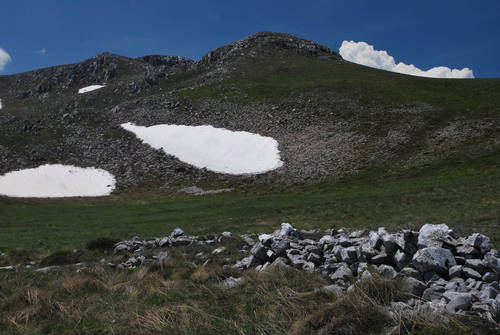 So we went down on the asphalt road that leads through here, with the unpleasant view of a lengthy decline. Right at the beginning of the trip we met a man carrying some herbs. We began to imagine that it is the owner of the car, parked in the saddle, and that to go down for a while, takes us with him. What was our joy, when that was really happened. He didn’t go all the way to the lake, but his removal was very helpful and other stopped car did not take too long to wait. Soon I have sat in the trunk of a car whose owner was talking to my friend sitting next to him in front, on Macedonian politics.

He took us to the lake, to the Pestani city, where he had to wait for another stopped car a little longer. However, we waited and were imported back to our hotel. When I looked in the mirror in the evening on my red face, I reminded myself how important it is bring a sunscreen to the mountains. 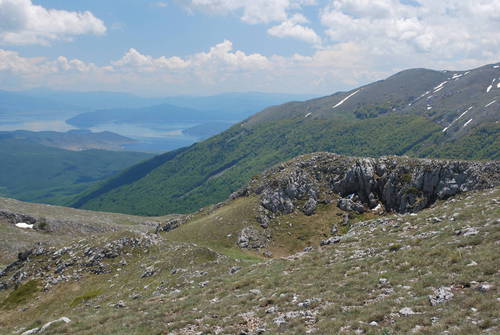