Who would like to visit systematically all places of interest in Madrid, he would be surprised and shocked as far as their number is concerned. Anyway, some planning could be useful idea, but Spanish capital is offering huge number of sensual percepts. So, it would be better to accept all this in such way as it could be presented to you by chance, wandering the streets and spending moments of relax in caffees and „tapas bars“. The way leads across wide boulevards, full of green, via enormous squares and around gigantic architectonical buildings. 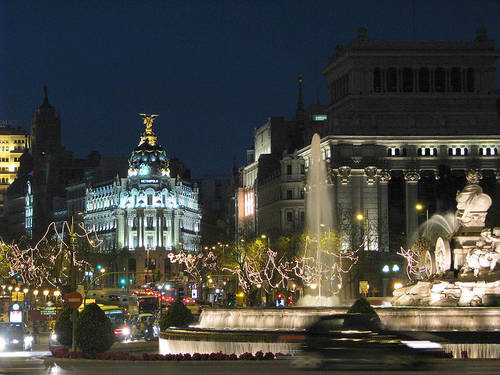 You pass triumphal arches, the houses acting as Renaissance chateaux, but also hypermodern skyscrapers. The history of Madrid started on west edge of its historical nucleus, where monumental King´s Palace was constructed in the course of time period. So, just here, along upper embankment of Rio Manzanares-river, emir Muhammad I., Arabian conquestor, let to build in 852, Alcazar, (known as Mayrit) fortificated palace. When the Moors were expelled in 11th century, Alcazar was used, by Christian sovereigns, as their hunting chateau. 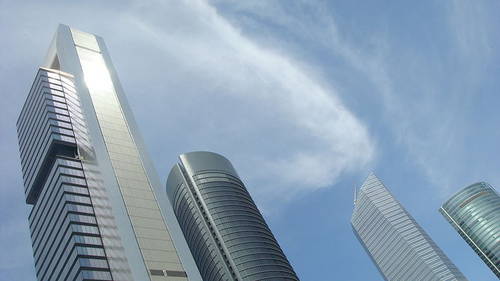 The word „Mayrit“ meant Madrid later. In 1561, Madrid became a capital of Spain. Alcazar served for next two hundred years as a residence of Catholic Kings, however,

the building was completely burnt out in 1734, and so it was substituted with Palacio Real.

King Alfons XIII. had a seat there as the last Spanish King. Later, in 1931, he was so afraid in front of demonstrating  Republican rebels, that he left the country into exil. Actual King, Juan Carlos I., is using this monumental building for representative purposes only. The monarchs, who lived in palaces, are painted in pictures (made by court painters) and have nice and noble faces. Nevertheless, the portraits, placed in Prado Picture Gallery correspond better the reality. So, painter Velasquez pictured several monarchs of Habsburg branch. Another painter, Tizian, pictured Charles V., as an old man (in reality, he was 27 years old). Painter Goya pictured group portrait of King Carlos IV. family. 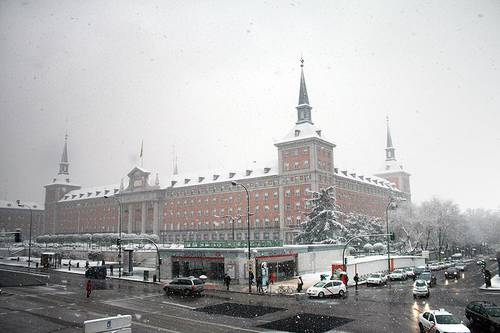 On Mayor Square, most beutiful Madrid square, the lordships watched from the balcony

the executions, bull contests and  heretics´ torning. At present, this free place serves to all Madrid inhabitants as an ideal place for outside relax at the cup of coffee and discussion with friends. When you walk from Plaza Mayor in whatever direction, you always reach quite interesting quarters of the town. 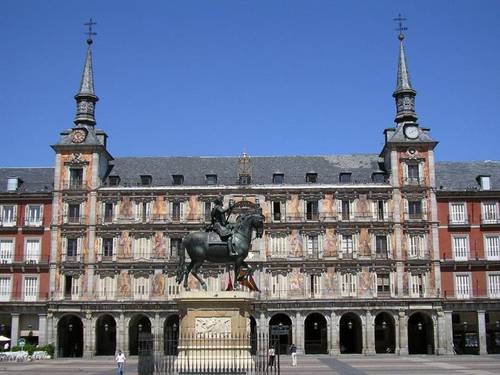 So, closely to Plaza Mayor, there are to be found small and narrow streets, passages with gates, stages and small squares of Old Town.

You can admire the houses which have the facades according to Habsburg custom, such as  Santa Cruz Palacio. To tell the truth, Spanish capital is a museum of architectonical styles in open air. Historical chapel del Obispo could be an example of severe Gothic style, whereas, on the other hand, one of most beautiful Baroque portals, could be admired in old hospital, changed in a museum. On pleasant Plaza de Santa Ana Square, you can admire Teatro Espaňol in a style of noble-minded classicism, and on Plaza de Cibeles, you can find Spanish bank, built in a style of decorated Renaissance style. 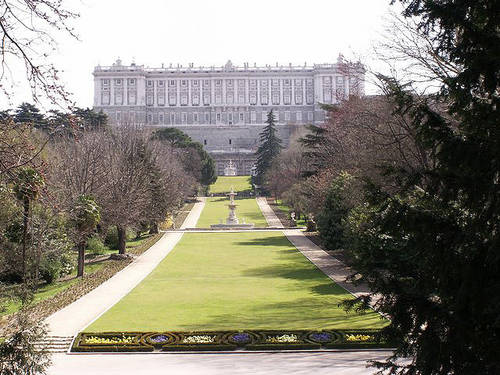 Art Deco style in its pure form is to be presented on Gran Via, Multi-movie Palacio de la Nusica, Art style is represented with Authors´ Trust building. The visitor, who could be able to see all interesting monuments within couple of hours, he would merit some refreshment. It is good luck that you can find everywhere bar or taverna, where „tapas“ are served to any kind of drink. So, tapas could be pickled shells, small piece of tortilla, cheese, ham, olives or any other special desires. You are obliged to taste it, otherwise you will be hungry till the dinner, being served in restaurants not earlier than in 10 hours p.m.