Tivat is located in the same named (Tivat Bay) part of the Gulf of Kotor Boka and has 11 thousands inhabitants. Thanks to the built infrastructure, mainly International Airport, is a major tourist resort with many hotels and small churches. The town is surrounded by lush vegetation from palm trees, oleanders, through cacti, to dense shrubby vegetation and mixed forests. Neighbourhood completes massive Dinaric mountains from one side and the bay on the other.

After we came to our hotel we were a bit tired, but full of expectations, what the city, that very preferred from catalogues of travel agencies, offers. At start were greeted by very friendly staff and I have to tell you that very beautiful, at least its female part. We welcome greeting: "Dobro došli” (Good come) known also from neighbouring Croatia. After accommodation and short rest at room we chose the Gulf Coast. It was a bit of shock, for what the travel agency warned in advance. The whole coast at the hotel was lined with ugly gray concrete panels on which lied vacationers and locals. We didn´t want to rest here, so we went along the seafront towards the centre. 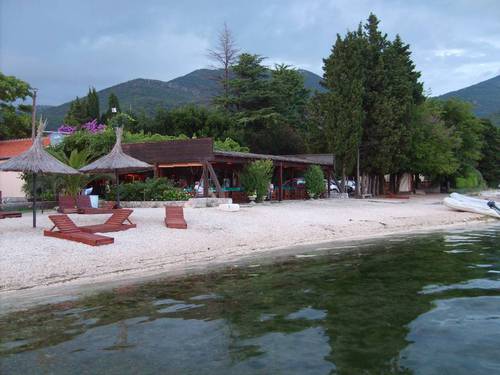 After a few tens of meters the gray panels replaced pretty shingle beach, where we found many beautiful shells. When we had full pockets, our journey continued. Just outside the city centre, we walked through a park that took us many exotic plants. As we read later, sailors brought them from tropical countries. Tivat is a port city. It is felt at every step. There are naval base port remains defensive architecture, small fishing shuttles lining the coast, as well as the large cruise ships and luxury yachts mostly Russian millionaires. And the influence of Russians in the city is evident everywhere. At times, we feel that Russian is the mother tongue of Montenegrins. Well let's get back to the city. The centre is actually one huge mall full of benches to sit surrounded by white Mediterranean style hotels. Every few feet there are stalls with souvenirs and refreshments. Of course there are restaurants that are either part of the ground floor of the hotel, or literally waving at sea and in remade and the waiting ships. 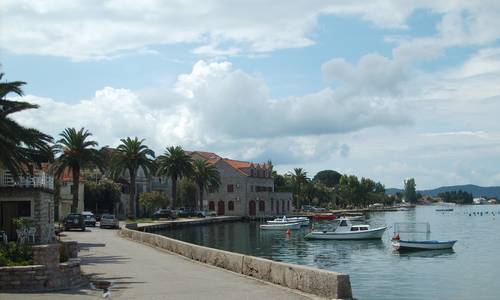 We came into town in the evening, even in daylight. From the so-called busy centre there was nothing. The streets were more or less empty, only one what was really enough there, were dogs. Such an amount of stray dogs, but very nice, we have not seen yet. No one bothered even to saying that blend in local colour. We decided to wait, a little disappointed from "empty" streets, at least at sunset. And we tell you, but it was worth it! The atmosphere of the setting orange-yellow balls of fire at sea was indescribable. When we awoke, for locals from an unprecedented view, could not believe our eyes. As the flick of a magic wand, the entire mall filled with an incredible number of people, as if she gave something for free. The town was alive with music, aromas and pleasant atmosphere. Boutiques glittering lamps were lit and enticed, even directly urged holidaymakers to shopping. We resisted and instead we prefer sitting at the local bar.

Finally, I can´t even recall two observations from a trip to the city centre. If we wanted to use the local transport, we would have to find stations that operate on a sign. Failed! Thus, except for one. She was "bus station", which for us has become a sort of starting point for trips. The second transport attractions were car horns. In the collision of two cars bypassing the driver always at each other in greeting, and blew this unusual feat made even on the busiest intersections. It was comical at times, but for us it meant a unique acoustic experience.

In the immediate continuation of our series, we visit the gem of Kotor Boka, a city of Kotor with omnipresent medieval tinge, which is listed as a UNESCO World Heritage Site.