en.infoglobe.cz » Morocco: The Magic of the Orient II – Streets in Fez

In Meknes, we stop for a lunch. Our restaurant is situated at a beautiful Arabian house. One feels here as if at a museum. Cedar carved ceilings, stuccas, terraces, courtyards, blue painted tiles. It is as if you were in a fairy tale. After lunch, we drive through the town and pass by gate with an inscription saying: "I am a happy gate for I may welcome people of nations and people of many lands." Jews, Arabs, Berbers and other ethnicities lived here together in harmony The gate is another example of excellent Moor architecture. 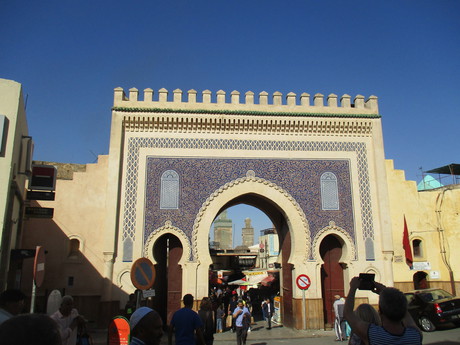 Now we have last 60 kilometers ahead of us. We arrive on Hasan II boulevard which gives us a vista of Fez's Old Town. There are over 200 mosques, 25 synagogues, and 15 church. This very tolerant town has four borroughs. Now we are heading to the oldesto ne which resembles a giant anthill. Local traditional houses are called rijads and there are about 8 000 of them. The borrough has been on UNESCO's heritage site list from 1978. In the middle, there is distinctly green roof of world's oldest university founded in the year 802. It was founded by a Muslim woman named Fatima. The borrough has alway attracted poets, intellectuals, philosophers, and musicians. Also, Maimonides studied at the university. Later, he would become a doctor and philosoph at Saladin's court in Egypt. Moor craftsmen settled here after they fled Christian Reconquista in Andalusia. 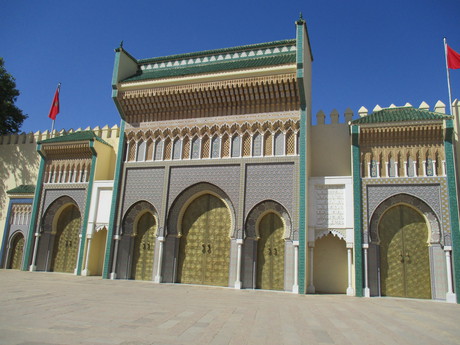 The city was everything to a Muslim society. People met on five different important places every day. At hammam, at baker's, by fountain, at mosque, and in medresa. The streets were very narrow, houses very close one to another. So, on hot days, there would be pleasant shadow. The king today focuses on construction of new housing estates which feature the necessary standart of modern life. However, the original idea of Muslims cohabitation gets slowly lost. Formerly, neighbours knew who is affluent who isn't for they met at hammam, by well to take water, at baker's to buy a loaf of bread, and they spend every Friday at mosque to study in a Medresa. Now, when they move to "civilized" dwellings, they life would became as isolated as in Europe. 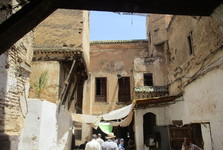 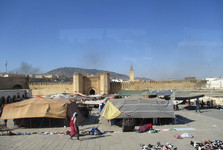 There are over 9 000 streets in Fez. Donkeys move the goods around. There are streets with gold being sold out in the open, other streets sell pots, another aloe silk, iron products, frankincense – this we see as we approach the tomb of Idris II, the founder of the city. Idris I, the father of the former, was the first Arab to arrive in  Morocco and he brought Islam with him for he was Prohpet Mohammed's blood relative. The Berbers were the local inhabitants there. Idris won respect of theirs by marrying a Berber woman. His kingdom flourished. This, however, annoyed Al-Rashid, his contemporary Egypt. This one is the cruel king you might have heard about in the the One Thousand and One Nights. He killed every woman he had an affair with. I am very confused of all this roaming around in so many streets. The markets were built in crooked streets for a reason. It made a potential customer confused, therefore made him spend there more time and loose more money on shopping. 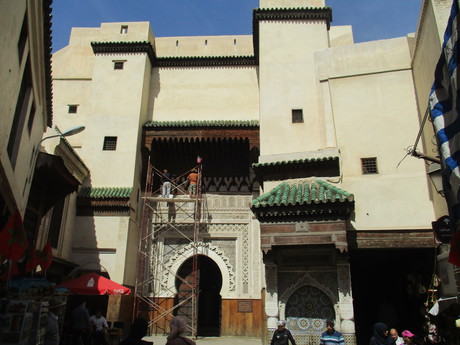 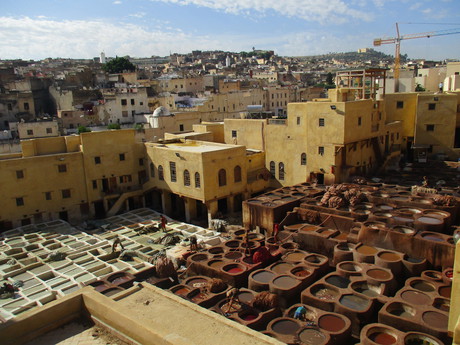