en.infoglobe.cz » Myanmar: The Land of Many Faces I – Old Times Mandalay

60 minutes lasts a flight from intranational airport Bangkok, Thailand to Mandalay. You can buy the flight ticket from home. Also, we recommend you to get an e-Visa. It costs 50 dollars and you can stay 28 days in Burma (another name for Myanmar). Exchange euros or dollars at Mandalay airport and you will get local currency - kyats However, keep about a quarter of your money in dollars or euro. You can pay for accomodation or transportation in foreign currency. Also note that you should have new unbent notes. You would probably need to hurry to a bus operated by AirAsia company which takes you to the city and the cost of which is included in your flight ticket. The airport is 45 kilometers away from Mandalay. 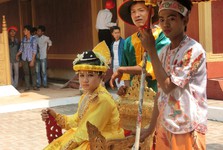 It is tiresome to enter dry out Mandlay covered in dust, cars, bikes, and mopeds. Yet the environemnt soon changes to beautiful architecture of the royal capital of Myanmar. The so called golden city was founded by King Mindon Min in 1857. He was the one before the last ruler of the Konbaung dynasty. He built his grandiose residence there. For 25 years was Mandalay the capital. However, its glory soon declined. The Brittons captured Mandalay in 1885. The Japanese ruled over the city during the WWII. Today a military junta is city´s lord as well as the entire country´s. 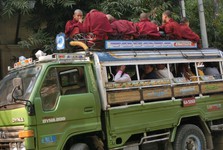 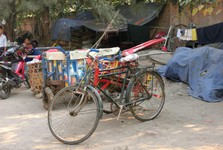 For 20 dollars for 2 persons a night we find accomodation in Nylon hotel. OUr room is clean yet it lacks window. We set off to the center. Buildings are being built everywhere. Scaffolding made of bamboo is glued to the houses and next to it there are piles of warm sand. Mandalay expands rapidly. The main ground for this became the opening of the border with China back in the 1990´s. Over 120 thousand people were forced to work on Yangon-Mandalay road, they also built bridges and railroad. Hundreds of people died because of this rapid expansion of infrastructure. They died of diseases, exhaustion, and work place accidents.

We buy a 10 dollar ticket which allows us to visit all landmarks in Mandalay as well as those in Amarapura and Inwa, towns nearby. The main point of interest for tourists is the royal palace which consists of 130 buildings. Its walls measure 3,2 kilometers, and %8 meters in height. Tourists can enter only through the east side guarded by the military. We get up to a (33 meter high) watch tower. There we saw the view of the entire compound and a ceremony including colorful Buddhist-style parade. 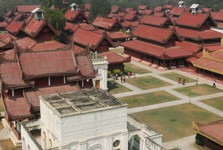 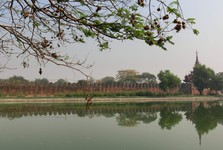 We set off to another landmark - a teak cloister. You can enter wooden Shwenandaw Kyaung cloister only sans shoes. The atmopshere is wonderful. Barefoot we walk on gently squeaking wooden floor. We feel like we were in the past, in the golden age of the city. Shwenandawu is also called "the cloister of the golden palace". It was the main rasidence of King Mindon.

Kuthodaw Paya palace also known as "world´s largest book" is very close to the cloister. Every marble panel represents one page. There are over 729 of them inside white stupas. Snow white houses shelter the pages from sun heat and monsoons. 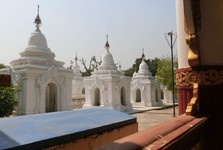 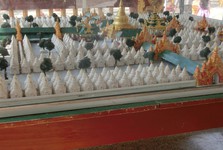 Mandalay Hill is a great place to observe sunset and sundown. Mandalay hill is 236 meters high. Buddhist atmosphere and panorama of the Iravadi river bank and the Shan Hills is what welcomes you on its top. The sun is disappearing slowly abehind the hills. I can only think of how beautiful was my first day in Myanmar.

Published: 25.1.2022
The Rickshaw Capital is a nickname for the metropolis of the country with the highest population density on the world. More in our article.