en.infoglobe.cz » Myanmar: The Land of Many Faces X –  Pindaya, a Meditation Town

Myanmar: The Land of Many Faces X – Pindaya, a Meditation Town

Jezero Inle is a perfect place to make a one-day trip to Pindaya town. Public transport is not at its best and one soon finds out that a taxi is better option. However, we rather hitchike. A van loaded with nice smelling tomatoes, zucchinis, and beans in netted bags stops and we get in. The driver stops at the first large crossroad and we hop out with some veggies he gave us. 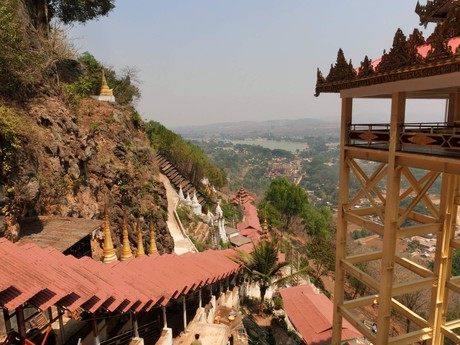 One gets ideas in Asia that would hardly work in Europe. We managed to get a fair price from three motorbikers on their way to the city. yet there is a catch - we sit three on each motorbike. Twenty minutes later, one of the bikes starts to make noises and to slow down. Smoke comes out from another bike. We hop off. Three is a charm and we really get lucky. We stop a minivan with a family. They get us to our destination. Nature around changes as we get into the hills. Trees of shades fo green, ochre soil, vineyards going uphill, colorful fields, and golden domes of pagodas are all lurking out from nature around. 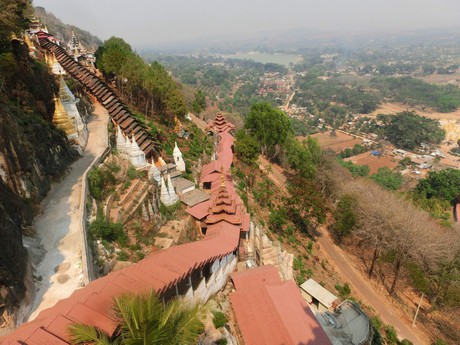 Pindaya is a small town in Shan State. It is situated in altitude of 1200 meters. A beautiful lake and a park consist of downtown of the town. You can find there comfortable refuge on a hot and humit day. It takes about an hour to walk around the lake. A large market takes place five days in a week near the artificial lake. It is a popular event among the locals.

A Buddhist town is world renowned for its caves. An easy road leads towards them- take a look at the sky and you will see "snake stairs". Hunreds of concrete rungs with small roofs go up along the cliff. The last 100 steps could be skipped by taking a glass elevator (9–12 a.m., 1–4 p.m.). However, you can reach the caves also by car. 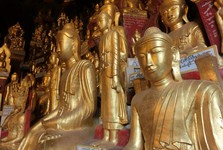 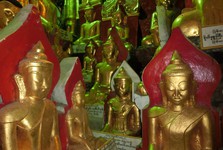 u enter the cave. There is a legend about it. Seven princesses bathed in the lake and the spider took them into the cave. Prince Kummabhaya hit the spider with an arrow he shot from his bow. He saved all princesses and married the most beautiful of them.

The admission is 3 dollars. Don't forget to take off your shoes. We enter a dark cave. There are myriads of small and large statues. We walk through a labyrinth of 8000 Buddhist statues made of gold, concrete, wood, or stone. The oldest were made in the 18th century. A black Buddha sculpture is a rarity.

Those who get through the labyrinth will find a meditation chamber. Only slim visitors will be able to crawl through this chamber. I sit cros leged before sculptures and start to meditate. 45 minutes later I am relaxed, and enthusiastic when I leave the place. 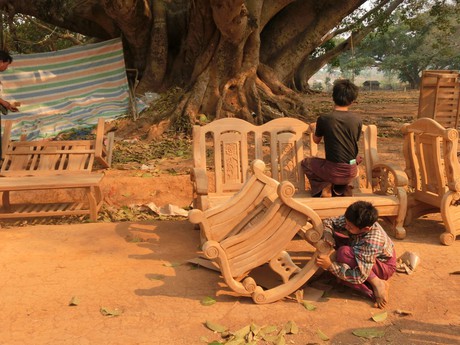 We buy some banana chips behind the exit from the Buddhist rock realm. I have never eaten something more delicious and I have never found something like it in all Barma. Down in the village, some guys make massive wooden furniture in a dusty corner of the street. We observe their skilled hands and offer them pieces of delicious melon. After a bit of sugar cane we move back to Lake Inle. We reach it when its dark already.