en.infoglobe.cz » Myanmar: The Land of Many Facesí II – Inwa on a Horse Carriage

There is an option to take a one-day trip from frying Mandalay to Inwa. It is possible to hire a taxi for a day or just to reach the town. You should consider to stop by at one of Mandalayan manufactures to observe the making of carpets, wooden furniture, pounding of small golden metal plates, or taking wet threads from lotos stems. 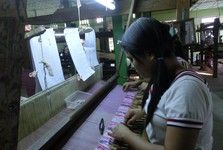 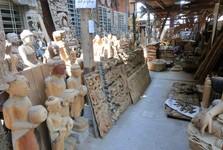 Inwa, former royal town, is situated 22 kilometers from Mandalay. You can't reach it on land. There is a water canal close to the town. However, doesn't necessarily need to get wet as they can take a ferry, a raft to be moe precise. We bought tickets for a raft made of bamboo. Then we ride through the narrow canal. The canal made Inwa an artifical island. The raft is the link thanks to which the locals can get to Mandalay. A Burmese biker takes the raft with us. He leans against his bike and greeted us with: „Mingulába“ (Hi). 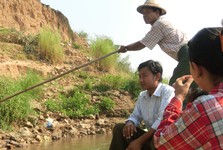 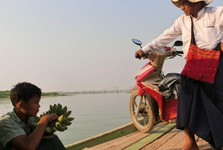 Ten minutes later we found ourselves on the opposite bank. There are about 50 horse rikshas there. Only we and some local children get off the ferry. They go down a dusty road with colorful flip flops on their feet to reach their homes. Therefore, we become the only prosspective source of income. Therefore, horse riksha drivers gather around us trying to get us in their carriage. It took some long bargaining before we got one for only one hour (for 2000 kyats per 2 persons). This affordable price was result of our decision to go further down the road. We chose Uman who is a farmer and lives in Inwa. However, he insisted that just an hour is not enough. But we don't have more time. Still, one hour is sufficient to get some idea of Inwa flooded by tourists. 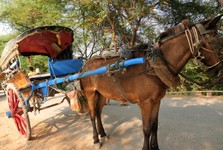 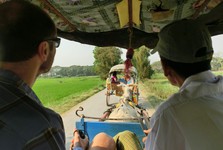 We get in colorful horse carriage which started moving slowly. There are sacks for bio waste tied to their backs. Therefore, there is no need to clean the streets after them. Regardin the roads - we criss crossed Inwa. There was not an inch of asphalt as far as we know. Carriage rides to one hole after another which are getting even deeper thanks to constant traffic.

We make several stops at the landmarks. These are situated mostly along ancient city walls. It is hard to comprehend how huge this palace compound once was. Inwa was cultural and political center of the Burmese empire from the 14th to the 18th centuries. Unfortunately, not much is left from this period. Therefore, the history is dated since the Konbaung dynasty in the 18th century. Royal atmosphere is present at the cloister where are unusual wooden stakes. A 27-meter tower Nanmyin is situated nearby. Next you can go to  Maha Aung Mye Bonzan, a cloister made of stone, Bagaya, a woden cloister where a head-washing ritual takes place every April. 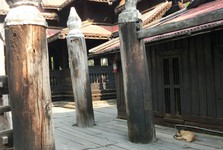 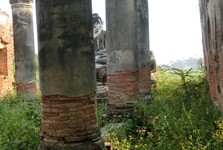 Our horses trot towards the ferry. We stroke their mane, say our farewells to the driver, and enter a massive raft. One perfect day says its firewell with beautiful sundown. Last sun rays light the ferry and its bamboo background.