We have been enough destruction, and yet so mystified map, which was in this place say inaccurate (we gave it the working title of "lying doodles").

That day the place that we stayed in night was the village Machha Khola. It is very pleasant, a large village with very nice people. We had to register here at the police station that was pretty funny. Mainly waiting room, which local created operatively in front of entrance by carry desk and chair. Swim, we went into the tributary of the river Gandaki Buddha, against whose current we then went almost all the way up to the saddle Larkya La. The path to the water through a pasture full of excrement showed us smiling toothless old man. The water was cold, but it was still in her wash and wash. We did a couple of effects, although we then had a little problem with drying, because the humidity was very high everywhere. 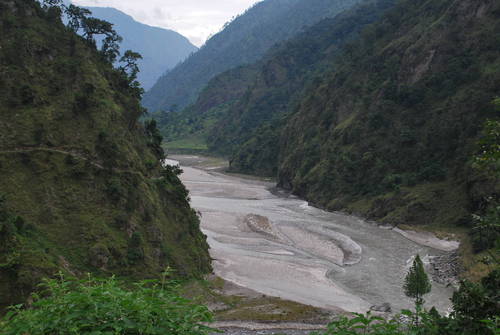 In this village, we also met with several other tourists - one elderly retired couple and two young couples. All were in addition to guide the carrier. Around half past eight Hari sent us to sleep. He said that we should leave, because after a while come Nepalese, will create an artificial entertainment for tourists and then want money from us. So we went and listened. Anyway, it was already quite late and we had to sleep the next day.

When I woke up this morning, I did not want to go anywhere, because I thought that, as usual,

the third day is definitely a crisis. It was not so. The journey was pleasant, it was that much fun. Although occasionally also up and down, but not as much as the previous day. Bridges, through which we passed through the Buddha Gandaki and its tributaries, was the vast majority of new and safe hanging bridges. We met a lot of mules with bulky and heavy costs on the back. Mules, calls gothor in Nepali says, in these altitudes frequently used for transport. In the group are always a few men, among whom there are often as young boys.

We stopped at a short sitting with some villagers. Zuzka gave the children sweets and much amused us, when old grandmother with a wonderful toothless smile too one said. Like almost all the way, all women skirt, scarf tied in a large and without exception, long, black hair. We often saw them with earrings in his nose. Overall, people were in the mountains a lot of decorating and wearing various beads, men and children included. In Tatopani (meaning hot water - the descriptive name, because there leak to the surface hot springs) we stopped for lunch and was about three o'clock we arrived at the destination - the village Dobhanu.

This village has become my favourite all the way. She was quite small and had its charm. After the village was located bridge over a tributary of Buddha Gandaki and below it was the perfect place for swimming. But the water was very cold, so rather than a bath was just about hygiene. There was a bunch of children that we apparently have taken. On the bridge I wanted to take pictures and so I started a game in which children pretend that they do not want to put a picture and hid under the blankets and various stones. Much is at it laughed and rejoiced. Then went over and down the river there and posed before the camera – most toothless little girl who was holding a sponge and two boys. The shot I got another boy, who at the river catching fish, but it was already too great a romp. Then I had them show those pictures and they are very amused at it. It took me almost all the rest of one of the two batteries into the camera, which I had with me. I had with them since so much to save.

When we asked one boy, "Tapaiko us ke ho?" So what's his name, he suddenly ashamed and did not answer. Or would he misunderstand? 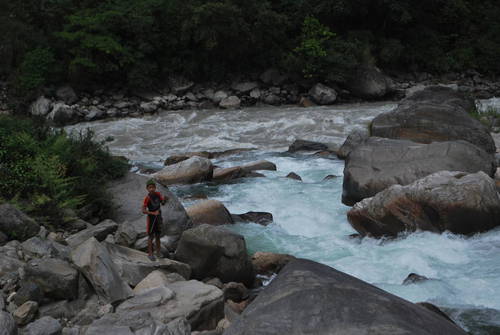 The loggia with us was only a single tourist. It was about an American (but certainly do not know), and he wasn´t that friendly. He had long hair and a little hippie appearance and looked like it went into the mountains for some meditation with nature. Have fun with other tourists, so we, apparently did not want much.

Morning after breakfast, which consisted of pancakes and marmalade, what tasted like rubber, our teddy bears, in turn, our children came running from yesterday and making picture making procedure is repeated. When we left, they sadly looked on us.