Permit to the National Park had been built on the exact date and we had to occur at the beginning of time. Walking was not very pleasant because it was again almost unbearable heat. Directly to us sun shined. We enjoyed, when we will climb to colder areas.

For lunch we stopped in the village Yaru and we have put bhat (rice with vegetables). Our guide Hari helped with the cooking, which is his hobby, and well versed in it. The kitchen was open and we are thus able to follow the procedure of preparation of food. The fire dried mutton and next to a wooden wall with wonderful valerian eats hay. Besides him there were plenty of other domestic animals. Especially chickens and ducks with their little ones and another small goat, which was just led to the slaughter. 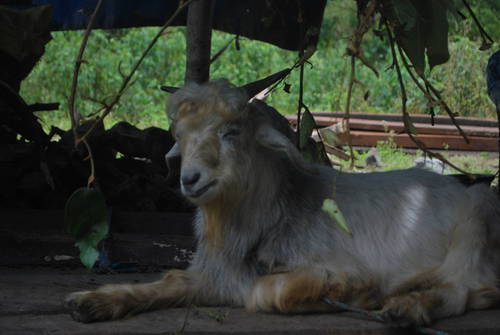 Fireplace was, as elsewhere, inside the cottage. Here at least one wall of the kitchen was missing, so the smoke could easily go out. Elsewhere fireplace was inside the room where the only doors and windows, and smoke accumulated there. Chimneys there were still nowhere to be seen. In some villages we felt like we were in Europe during the Middle Ages. 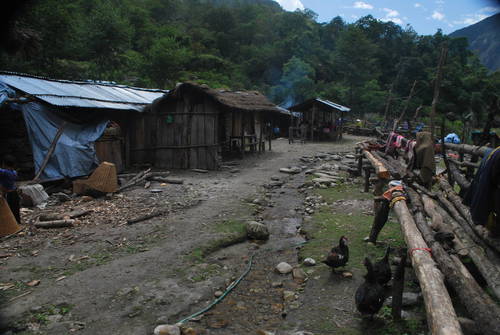 Next to the fireplace with a metal pot holder was the mat on which food is prepared for cooking and frying. Hari offered us a taste of mutton. With Zuzka we refused because it is generally recommended not to eat meat on trek. They have no way of cooling here and could therefore be spoiled. Milan can still put a little bit. Tasted it and nothing had been after him. Milan has but duck stomach and is therefore not representative of food safety assessment. Then we Hari even offered a piece of cheese. This time I tasted and I, because I love cheese. It was excellent. Unfortunately, this little piece was an exception and nowhere else on the trek, we have already met with cheese, not counting the little that we in the mountains to the Nepalese bake on Tibetan bread.

From Yar to Jagat the journey lasted less than two hours, and turns in it stretches down the hill into the home stretch. We passed a sign that we announced that we are entering into the Manaslu Conservation Area. At Jagat we stayed in yet luxurious balcony of our journey and went to the office to register. Here, we have flyers on the bulletin board learned that trek around Manaslu currently visiting some 2 000 tourists per year. Last season they went through here around 1000. On the board was also a leaflet informing about the activities of the local Association of Mothers. On the poster were pictures of animals that live here. The figure looked down at us snow leopard, brown bear, chamois and many species of birds. 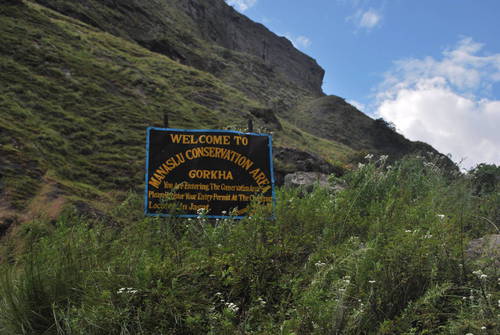 That day we had lots of time, we decided that we go through the village or for her. We said that to Hari and yet we had originally intended to go alone, he took it as a task for us to arrange a suitable alternative afternoon excursion. He began to actively ask questions of local and even those of us in a while Hari led somewhere in the backyard. They showed us that we have to climb over the fence and go way up, apparently for some very nice view from where you can see in good weather and Manaslu. Although the climb was quite steep, but without our heavy backpacks, we felt like we could fly. Already on the way we unfortunately found that the general views are not, because all the surrounding mountains are in cloud. Too didn’t care too much because even without it, the trip was pleasant change. 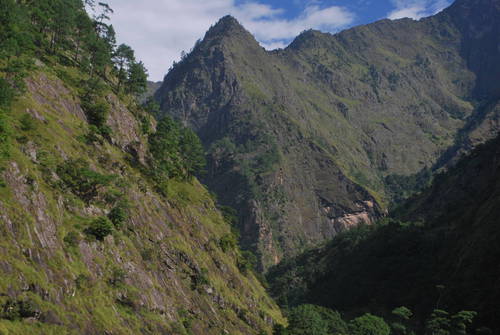 When we came back down, waiting for us a very pleasant meeting with Czech group of five, which consisted of older people compared to us (and mostly in their sixties), but who apparently were probably experienced mountaineers (from the Himalayas). Very nice, we talk with them. Some of them have their way, despite their health problems, e. g. lady, who went to the trek, despite her arthritis. Then we really admired her. She said that when he was the first time (that they were about fifty), so he too bore all things for yourself. Now, they had the carriers. We got several good tips on bargaining and prevention of mountain sickness (much to drink and pee a lot). Overall, it was really nice meeting, which, though short, a person can add a lot of energy and motivation.