It should be noted that in this area we passed a number of newly fabricated hotels. I suppose the Manaslu area in a few years transformed into a highly tourist area with tens of thousands of visitors each year, as it is in the vicinity Annapuren. So we were really pleased that the beauty of this trek, we can still enjoy the privacy. 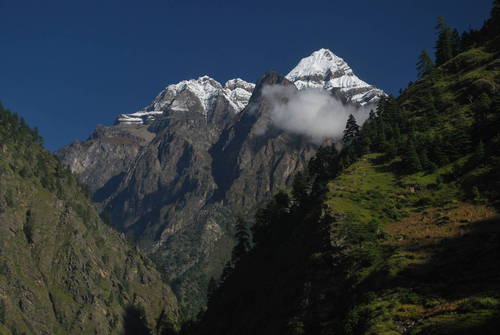 On the way grew litchi, but unfortunately was not ready yet, so we couldn’t eat it. We saw a Buddhist building where he was standing on a large metal cylinder (later we met yet another, woody one). We walked inside. All the walls were various images of Buddha - young Buddha, Old Buddha, laughing Buddha, the Buddha misbehaving. Especially the last one character I felt the power of Buddha. To me the character seemed like a devil, very badly gaped. Hari but claimed that this is also the Buddha before enlightenment. It also told us that this building, and especially inside the cylinder handling and says that we turn the cylinder. When we do, we say lucky. You should spin one, three, five times, etc. The speed number must be odd. We did as told and then we went on. After the tour we also met frequently walls on which were stacked plates with holy texts. It must be circumvented so that they are always on the right side, as well as all Buddhist buildings, and also called mani. Hari always, when we walked around the mani, humming prayer “Om mani padme hum”.

Due to the rapid rise of water by about 150% in Kathmandu we started to disinfect water from the river. We had to disinfect the rest of the drops from previous trips have been to maintain a good taste of the best water around. When you run out, we used a two-component powder that although he was quite fast, but it left a pretty strong taste. Finally, we also had pills that were one-and didn’t leave any special taste, but disinfection of one litre lasted 2 hours and that's why we use them only when we had enough of water. 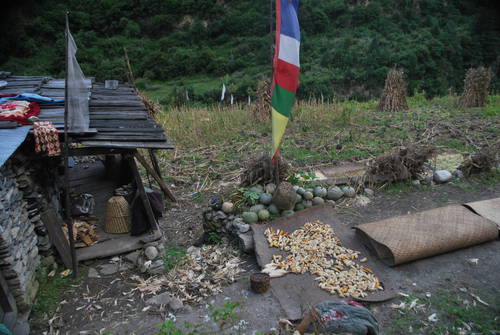 We spent the night on the loggia Buddhist family in Ghapu. When we arrived, the building echoed with some music, especially drums. Hari told us that it will last for about an hour and that it is a Buddhist prayer, to bring happiness into the house. They met here because of the blessing of lamas from nearby monasteries. Hari wondered if we say it does not matter if we do not disturb a prayer so that we would therefore like to go from here. We really did not mind, quite the contrary. Even we could peek into the room where the performance was. There sat a few men, who loud, with the sound of drums, prayed. They used the corn in the same time. What I do not know, but there was a lot of corn. When it was over, all participants got a big portion of Bhat. We could eat after them. I wrote daily, while Zuzana again practiced with elastic her back. Suddenly I could see her not practicing by herself. In the other end of the elastic was pulling by some lama. When he got bored, the reins took Hari. Apparently Zuzana´s elastic was interesting for everybody. 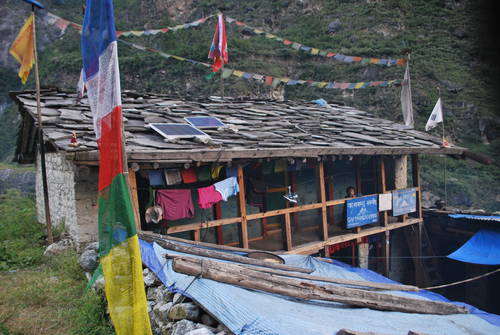