The way led fairly steeply uphill from the start, to the village called Shiala. The village looked awful. It was as if a dark ruined. It was full of children, who caught us and beg the pens. Only the little horse stands near the road we liked, but also he showed us his bum. Hari said that Shiala is currently in reconstruction. We definitely did not intend to stay here even for a moment, so we just went away on quite pleasant terrain to our today aim – Samagoan. 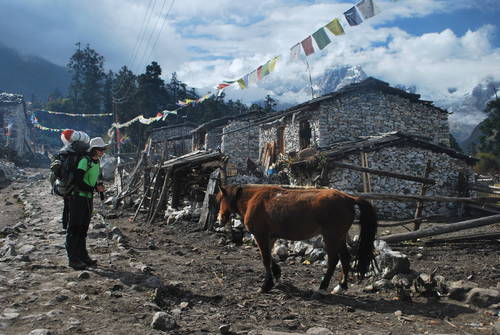 Nevertheless Samagoan is important village that serves as a starting point for expeditions to Manaslu, doesn´t look much better than Shiala. After just coming to us she was a ghost town and my impression has not improved, even though we have gone through it. Although there were lots of balcony, but they were full. Fortunately, we came upon a man who when he saw that we look for accommodation, spoke with Hari and led us to one small hotel, where one room after all they found. Unfortunately they had to move out a few Nepalis due to us. It was probably the guide and carriers. It was one night when Hari was sleeping in the same room with us. Here I found that I have a pinched from fleas and Zuzka too. Only Milan fleas remained intact. We did not know exactly where we come to them, but we had them and took some time before we get rid of them. For me, it has since marked the beginning of regular rub the bites during a day and night by Fenistil cream. 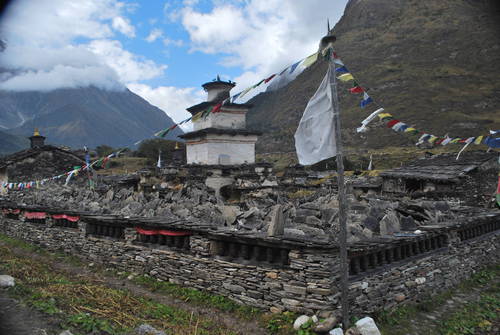 It was very nice that in the loggia at Samagoanu we met some people whom we knew from the beginning of the trek. First we met two young Frenchmen. They said that they have 13 days to do the trek and therefore they do not have much time for acclimatization. They were from Brittany, and said after returning from Nepal about to start a new life somewhere in the Alps. The second ones was a couple of retirement from New Zealand. The lady still looked quite uncomfortable and barely greeted us. I've never seen her smile. Lord, as we could see later, was, in fact very nice, and after dinner he started to talk with us. He said he was with his mistress in Nepal several times and decided that the pension will go here as volunteers, which they did. The lady was teacher of English and he arranged something about the water supply. He said they used to travel to Tibet, which according to his words, there is already different than before. The real Tibet with its culture moved to Nepal, especially to India. Lord said that he watched from his office on Manaslu and so decided to end your stay in Nepal this trek. They were only one who slept in tent. When Zuzka asked him, if they aren´t cold, he answered, that he has very loving wife. So, who knows. 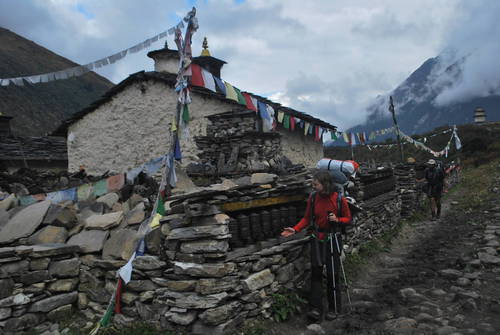 The last ones, who we met, were two Czechs - Pavel and Janek. We met them the very first day of journey and several times we passed each other. They said that in Nepal met a year ago and that he had been here several times. We go through this trek, then part Annapuren and eventually lead to a village where they wanted to spend two weeks. Also it was very nice meeting.

Because the height of three and twelve thousand meters it deserves adequate acclimatization, we decided that we will stay one day in Samagoanu and go on a trip towards Manaslu base camp. Then there we went the second day.