en.infoglobe.cz » Nepal XIV: In The Saddle 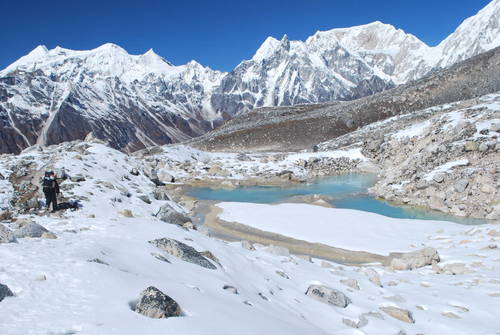 Nowhere there was any stream. We found it behind the hill, but first we had to water disinfected, so we could drink for an hour. Landscape, which we declined, was also beautiful. It was possible to see clear glacial lake, beautiful mountains, glaciers. We heard several avalanches falls.

When we get down from the worst hill, we started to hang around. Once, when we found a wonderful spot for staring, that was the river, Hari had already been clearly nervous. He was afraid that we get in place in any Bimtangu loggia. We wanted to send him back ahead, but he said something to the effect that he could not go ahead because it's dangerous here, and someone would be able to ambush us. So we sent him just before Bimtangem and we just followed him, because there was no nice place to enjoy. 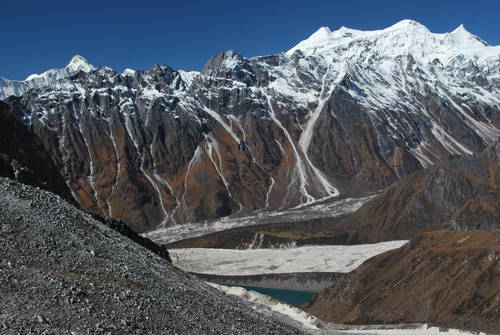 From the Bimtangu we could see Manaslu again. More exactly her ass, as we started to call this view. Bimtang itself is but plain villages. Here you clearly see that was built just for tourists, as it detracts from the magic of villages where formerly lived Nepalese and Tibetan people and to which only later built a loggia. Bimtang is all under construction. We lived in a house in a simple enough room, which consisted only of one large bed, but otherwise there was barely room for backpacks. Entrance to the very small so we – me and Milan, were several times strongly hit our heads. The simplicity of accommodation but we did not mind at all, we had no problem with that. Originally, we expected that the way we normally live in the hall while we were always, without exception, private room. 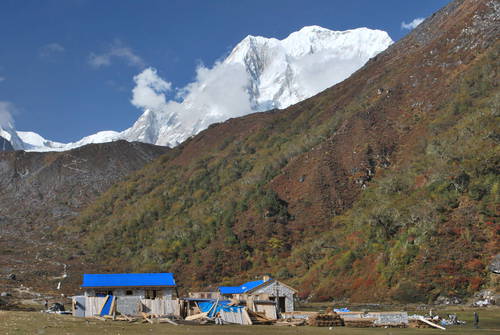 We met here two women from Canada. They were a mother and daughter. They said that they have decided to take a day off and hit the road for several months. Up to end up in Nepal, leaving home for two days to get repackaged and taken round, which is then fly to New Zealand. You also carry all your stuff alone. They try to find a doctor, because the older woman a few days ago a spider bite and hurt and hardened morning. Hari said that in Nepal spiders are dangerous, because some of them are very toxic. And there's quite a bit, every now and then to Milan some photographed and filmed. I am of them had more fear and I avoided them. I did not like was that some of them jumped up and down instead of the normal gait. 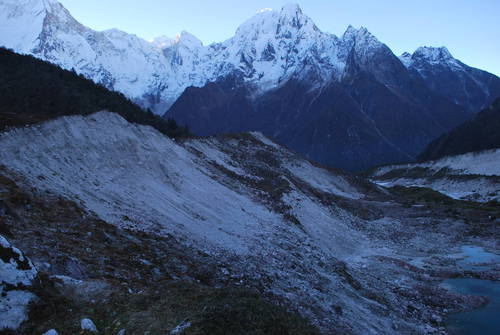 Bimtang village is not pretty, but its surroundings are beautiful. There is perfect view point not only on the back of Manaslu, but also on other mountains, and it is possible to climb the glacial moraine of aggravated prospects are opening up another splendid views, including the glacier lake. Moraine is a popular place to carry out the basic human needs and we have it for this purpose also used. We started going there after we once visited "Turkish toilet" in our balcony. The facts, the door couldn’t close, and that the overall wasn’t beautiful, we would not mind that much. But it was crowded and it would be too much for him to fit more filling, we did mind, and therefore we preferred the natural toilet. 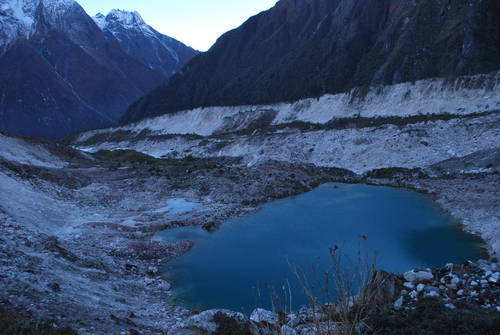