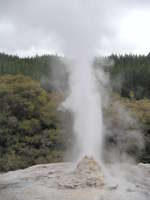 According to the guide is hitchhiking in New Zealand quite often used ways to travel in cheap style. Our first experience was such that in Rotorua we waited more than an hour before we stopped the car. The driver was a local native who drove a big van to work in Taupo. It was fine for us because we had our big luggage. Rather, I hoped that we could take up to enter the reservation, but was apparently in a hurry, so we had to go from the main road on foot about 2 km. We bought tickets (32.50 NZD), we hid the bags next to the reception and we went on tour.

The first attraction was the Lady Knox geyser, which was located about 1 km on the other side of the entrance to the premises. I was glad that we finally stopped a car because this geyser spewing hot water only once a day, 10:15 to 11:15. At irregular intervals are changed alternating strong and weak flares, which can be seen from the seat in front of the geyser. The geyser, we had to go back to enter the area where we should start guided tours. After a while we walk by itself slowed down a Dutchman, and asked if we do not want a ride, to which we of course agreed. He was a young boy, who after completed studies decided to travel alone for several months.

The tour was possible to go either in the short, medium or long versions. We chose the last option and I think the experience was unforgettable. After the entire route (approx. 3 km) is a lot of bubbling mud, mineral terraces, crater lakes and variously coloured. Certainly the biggest attraction was a pool of Champagne Pool featuring orange-coloured band along the coast, which is caused by precipitation of the sulphides. Magnifies the effect of the addition, rising water vapour and CO2 from the bubbling lake. The lake measuring about 65 m in diameter with a maximum depth of 62 m was created by hydrothermal eruptions about 900 years ago. Surface water temperature is around 75 ° C. Interesting was also the last stop on the entire circuit - a small lake called the Devil's Cave, its green coloured water is rich for sulfur. 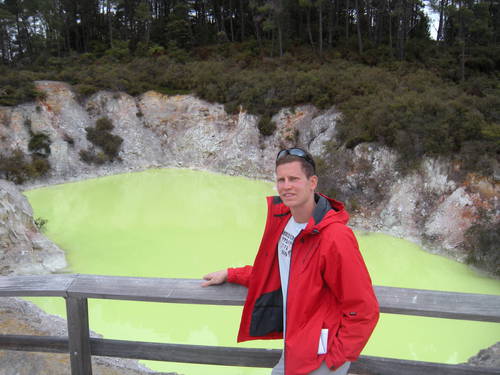 After completion of all circuit, we indulged in a bit of regeneration and pleasant lunch in a local bistro. After lunch we had back on the main road where we had planned to continue until the stop Tongariro National Park, which was another point of our trip. To our misfortune, however, we waited almost 2 hours before we were able to grow anything. It was a nice lady who worked as a guide for Department Of Conservation (DOC). She gave us helpful advice about the trek called the Northern Circuit Tongariro National Park, where we had planned to go. But the lady went only to Taupo, so we asked her if we could stop at the information centre. Because the two we were quite tired and a bit too successful tracking of disgust, we decided that day that I will not go anywhere and spend the night in one of the local hostels in Taupo.

Before we accommodated, we agreed in the information centre that the hitchhiking cross the New Zealand may not be completely effective way to travel, so we decided to buy the Travel Pass from the intercity bus companies. Travel Pass was 155 NZD and comprised 5 ways regardless of mileage. It was important that a man rode in a bus without changing. The optimal choice was the longest crossings.  With this Travel Pass we finally crossed the 1 and half of island, which was a great price-performance ratio, due to local prices. 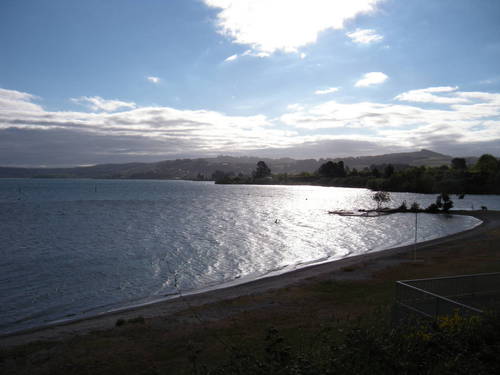 In the evening we went for a little walk through town and around the biggest New Zealand´s lake in Taupo. In the town is not much to see. It is worth mentioning perhaps the opportunity to try one of the adrenaline activities. The lake is situated in the caldera of volcanic origin and arose during one of the largest volcanic eruption about 26 500 years ago. The lake is so clean that there is an annual contest in catching trout. It was quite windy and cold, so we were also grateful for the solid roof over your head. After the walk we lay down, and hoped that the next day we will start our 4 day trek in Tongariro National Park with beautiful weather.