With positive mood we got a bus to Turangi where we arrived after about 45 minutes drive and where we are now waiting longer to have transgressed the supplies that we had already arranged and paid for Taupo. Supply us easily imported into Whakapapa Village, which is one of the starting points on 4-day trek to North Circuit (Northern Circuit). 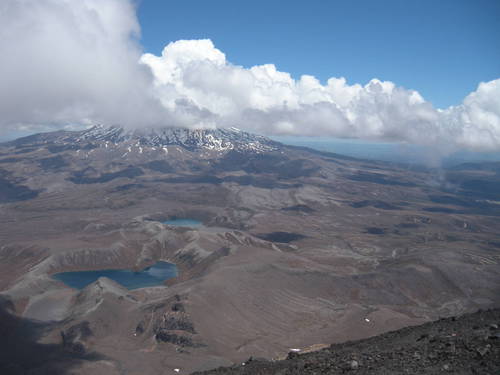 Tongariro National Park, established in 1887 as the first National Park in New Zealand, boasts by three active volcanic peaks - Mt. Tongariro (1967 m above sea level), Mt. Ngauruhoe (2287m asl) and Mt. Ruapehu (2797 m asl), which is the highest peak of North Island. North goes around the circle almost symmetrical volcanic cone of Mt. Ngauruhoe and among other things, offers amazing views of Mt. Tongariro and Mt. Ruapehu. It can pass in both directions, but there are reservations required overnight stays in camping sites (either in house or in your own tent), which are capacity limited.

In the information centre in Whakapapa, we found that one of the camps there is no sp

ace, so the originally planned direction of the Emerald Lakes we had to modify the trek and go in the opposite direction. We have therefore necessary reservations, paid accommodation and set off towards the Whakapapa hut Waihohonu, which is about 5-6 hours walk. It was quite relaxed, slightly undulating route without any physically demanding passages. Right at the beginning of the trek we passed a beautiful waterfall Taranaki Falls and did not take long and already appeared before us a magnificent view of Mt. Ngauruhoe, which was still in the clouds a little while ago. First we took a break at the prospect of Lower Tama Lake, which leads to about 10 minutes turning the trek route. To the cottage we arrived in the evening, built our tent and cooked pasta. The advantage of camping is that campers can use all the equipment huts, with cookers.

The second day wasn’t necessary to get up early because we had only a 3 hour walk to the next hut, where we had paid for bed. Because the weather was beautiful and we weren’t in hurry, after about an hour I decided to walk to a small dip in crystal clear streams. Dita my idea was shared by only half, so he dipped his feet at least. Rest of the way he was, indeed, like most of the trek, a hint of lunar landscape. On arrival to the next hut we were welcomed by a Slovak (living in Switzerland), who went with another German trek in the opposite direction. Again, we spread a tent, cooked dinner and our bed - mates playing a few board games. 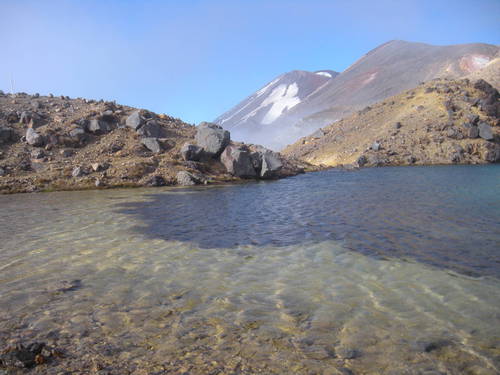 The third day of our trek was the toughest because we waited about 10 hours walking with a considerable elevation. So we got up early as 5 am, pack up after breakfast and went to the exit to the Red Crater. Initially, it was good, but the final climb to the crater was difficult. The journey was made debris, so at each step it was a bit slippery. Climb up also complained by quite windy and changeable weather. At the top we had to wait to see anything, which is not finally paid off and he appeared before us a beautiful view of Mt. Ngauruhoe and Mt. Tongariro. After a small break we climb down a bit and then went to conquer the summit of Mt. Tongariro. This time we went easy (backpacks, we hid behind boulders). The way there and back took us just over an hour, but at the top, we did not see much because the mountain was immersed in the cloud. After the descent we decided to have lunch and then divide. Dita went slowly toward the next cottage. I finally succumbed to the idea to conquer Mt. Ngauruhoe and decided to easily climb to the summit, which was at that moment in the cloud. 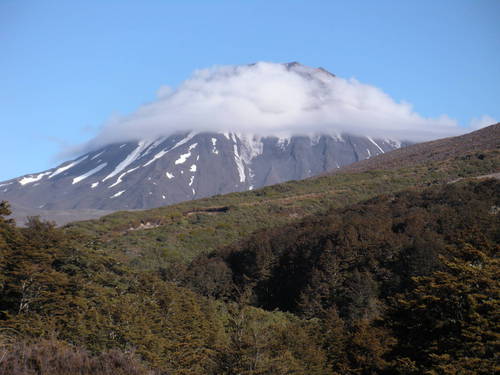 The official way to the top there is a need to go through quite an extensive debris field, which was in effect challenging than I expected. During the ascent I had to continually add energy grape sugar. The entire output is returning me lasted 1 hour 50 minutes, even though the information boards talked about 3h. Above I was lucky, the clouds disappeared and I opened up magnificent views of both lakes - Lower and Upper Tama - along with Mt. Ruapehu, whose peak was not just in the clouds. These views I have been a real reward for the difficult ascent, and I is properly used. Descent has gone much faster, and soon I was back on the path toward the cottage. Here, however, I experienced probably the most adrenaline experience of the trip. At one point I turned toward the hill, I saw as it rolls right at me with an avalanche of volcanic debris boulders meter in diameter. I did not wait for anything, and of course I ran back down the road, because I didn’t want the avalanche take me as well. To my surprise a few hundred meters away, where I ran, was an older couple and the incredible natural spectacle he filmed the video, while greatly amused. After calming down, I finally could not resist and pulled out my camera and captured at least the final stage of the avalanche. The rest of the journey has been nothing dramatic happened. In the evening we went to bed early because we were both very tired.

The last day was literally relaxing. Just not nice weather and landscape also has been neither so interesting. We have successfully completed the trek again in Whakapapa, where we had arranged transport towards the village of National Park. From there we then went by bus directly to the metropolis of New Zealand - Wellington.