It's very popular 51 km long trail leading along the coast with golden sand and crystal clear water. Because it is a national park area, there is not allowed to camp. Overnight is permitted only in camps, which must be booked in advance. Usually there is only space for a tent, the cottages are located just in a few camps. 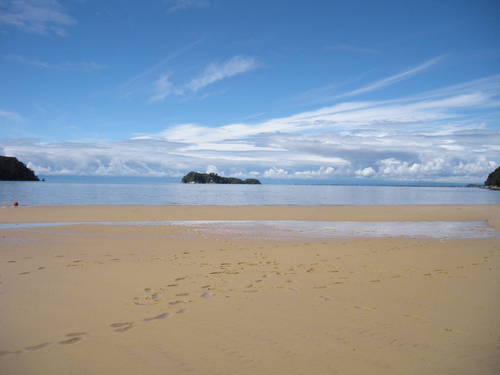 The first day trek awaited us approximately 6 hours of walking, and because, it was really nice weather, we often stopped to swimming and lazing on the beach. The advantage is that there aren´t too many people, mostly we were on the pristine beaches alone to just listen a sound of the sea and nature. Here was a veritable paradise on Earth.

The part of a coastal route is the crossing of several flooded areas. Some areas at high tide it is possible to circumvent the side road, but two of them can go only during low tide, because the path leads through. Today, however, we do not have any limit. We arrived in camp late afternoon and besides us there was also a German and French. At a dinner we got into conversation and then we played a few board games. 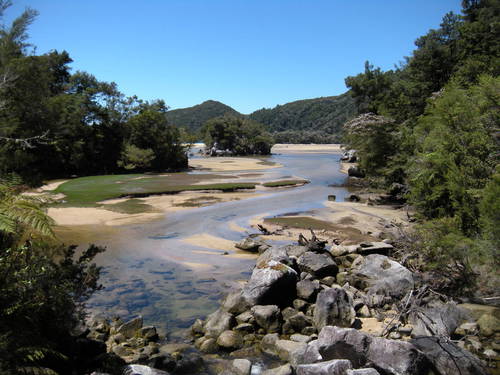 In the morning was sunny weather again, what invited us to morning swim in the crystal clear sea. I went into the water first, then German, French, and finally there had to go Dita as well, to keep the contact with us. Today we had to cross the flooded areas on the beach Onetahuti we could only do it in the afternoon. Therefore, in the morning we had a time and went up around the 11am. The path led at times dense bush, sometimes on the beach. If we liked some of them, we stopped and bathed. Most of the time we spent on that on, which lay already in the flooded area, where we lazy until the time, we could see the tide. 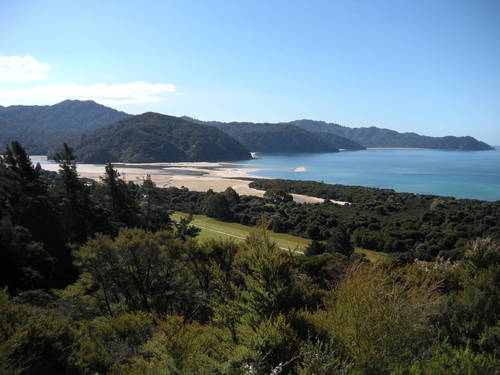 Our next camp lies in the other flooded areas in Awaroa Bay, which can move only at low tide. This camp was still single, which had a cottage and a ranger. He came to us immediately to check if we have confirmation of payment. It also gave us information regarding the transition. Originally we had planned to go during the afternoon low tide, but according to the time ranger told us, which we missed aquataxi that we had booked from the end of the trek. So we recommend a morning shift, not later than 6 hours. Camp was once again completely empty except for the same boy from Germany, who shared with us a common place and last night. I think he was glad that there is someone "known" and so we spent the evening together again.

In the morning we had to get up at 5 am to pack a tent and no later than at 6am leave. While we were crossing transition, we saw how the water progresses very rapidly forward and closes the path for us. Some passages were necessary to wade. On the other hand, we only have breakfast and then went on a trek. At first we stopped near the beach and nearly all morning and we were lying bathed since the end of the trek was more than an hour's walk. The water here was already quite warm, so they could swim longer than 10 minutes. 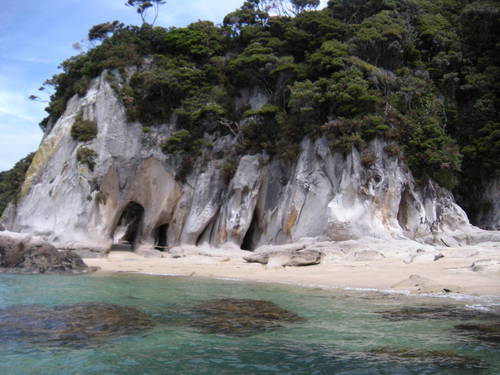 Before noon we went on the last leg of our trek towards the Totaranui. The aqua taxi should pick up us there and take us to start of Marahau trek. Because we arrived in Totaranui earlier, we tried to ask the driver of aqua taxik, if he would take us by earlier line, we to do not have to wait unnecessarily. The boat was fortunately free so we could get in. The driver was very nice and prepared a surreal experience. On purpose we were passing the places, where you could see a seals and even penguins. He always told us something interesting and waited until we take a picture of everything. The whole trip took about an hour and a half and even though it was just over 40 NZD, we certainly didn’t regret it and we enjoyed it properly. 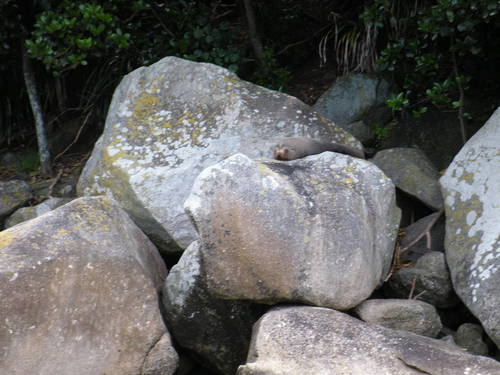