After breakfast we went to another section of the trek towards the cottage "Mintaro Hut." Today we had to go about 6 hours walk with gradual climb along the river Clinton. Compared to the previous day, the weather worsened considerably. Finally, we are experiencing the typical "milford-sound" weather - there is an average rains 182 days a year (average annual rainfall is nearly 7000 mm). With the rain here you have count with and to be well equipped. On the other hand, due to rain, it is possible all over the surrounding hillsides see massive waterfalls that would otherwise be hardly visible. The clouds were very low, which generally induces a somewhat gloomy atmosphere special. About 1 km from the cottage but it started raining very heavily, so we did not hesitate too swiftly, and we climbed the final meters. After drying, the safety briefing and stay in the cottage when we had dinner together once again a pleasant chat with a few others travelers. We met with one Danish couple who was on 9-month trip around the world, one American and others. 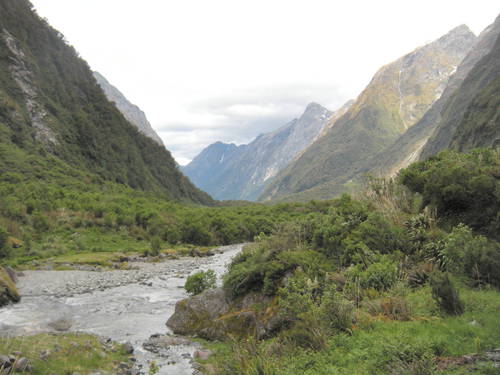 Third day of the trek was the hardest. From the cottage about 2 hours we climbed up into the saddle Mackinnon Pass (1154 m asl). Just before the saddle we made a break for a photo shoot and to our surprise we saw here first Kea parrots in the wild. Perhaps they were accustomed to tourists, so not too willingly, and not afraid to shoot left. The weather here has been very variable. At times it was raining, 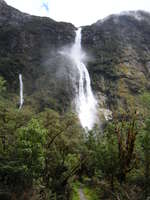 but sometimes we opened the beautiful views of both valleys. For the rest seat was equipped cottage even a gas stove so you can cook it as tea. In the afternoon we began our final descent to the hut "Dumpling Hut." In several places have been artificially constructed steps, but to my luck, I managed to slip them on and I ran into a little hand. Fortunately it was nothing serious.

Dita lent me bandage, she treat me and we could continue. Before the hut was turning to the highest waterfall NZ - "Sutherland Falls," which of course we could not miss. The waterfall is 630 meters tall and is among the 20 highest waterfalls of the world. Close the turn was the cottage, where we had backpacks and from there we went easy. We were glad that we took with them the raincoats, because the water from splashing waterfall a few meters away. However, it was a wonderful experience and at the sound of falling water masses I again realized the power of boundless nature. By turning to the cottage it was only about an hour away. After consuming nearly eight-hour hike is not surprising that we were both very tired and very dirty already. Because cottage located just 100 meters from the river, I decided that I will bathe in the evening. The evening then went similar way  as the previous two. 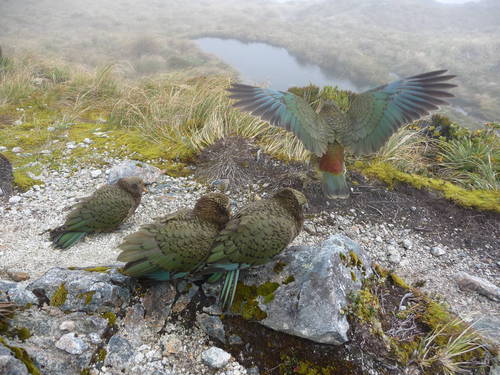 The fourth, the last day of the trek, we start around 8am because we had to catch the boat a 2pm or 3pm that should take us to the village of Milford Sound. From cottage "Dumpling Hut" at the end trek "Sandfly Point" that was with breaks about 6 hours of walk. The path led along the river Arthur, Brown Lake and ended at the mouth of Milford Sound fjord. The weather that day was favourable, and because we made only one stop, we finally managed to ship as early as 14h. Cruise lasted approximately 20 minutes from the deck we could see almost a textbook view of one of the most photographed mountains around Milford Sound - majestic Mitre Peak towering to a height of 1692 meters asl. 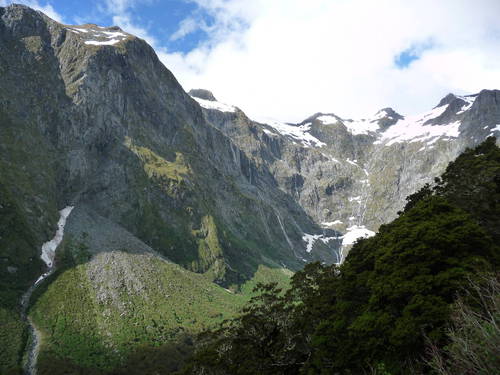 After landing we had planned to try again to change direction of Stop Queenstown. So we went on the road to the end of the village and raised his thumb, I tried to happiness. We did. After about half an hour we stopped two Canadians and took us to Te Anau, then half way. Same as us, girls from Canada traveled around NZ one month. They dropped off us on the main road to Queenstown and in less than two minutes after we stopped another car. They were to change the two Israelis and drove to the suburb of Queenstown. All the way we talked about everything, so we are not unexpected and we were in front of our aim. We got off near at the airport, and to the centre we have already arrived by public transport. We stayed in the same hostel as before the trip to Milford Sound, once again we had dinner a complimentary soup and went to bed early, to be well rested for our last day on the South Island. 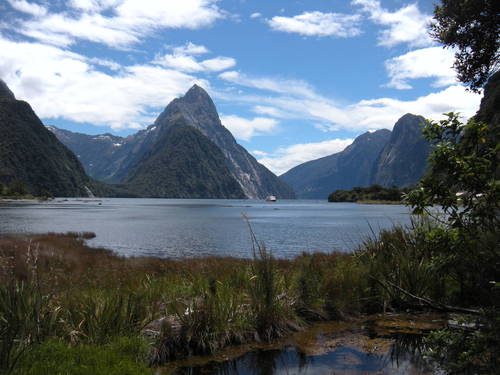