Original name of the town was Bjørgvin which you could translate as a "green meadow between the mountains". As the name suggests, the town was built on green field between seven mountains. This is why its location is so impressive. The city borders the sea for it is not completely surrounded by the mountains. Today it is best known for culture, industry, and trade. There is nice atmosphere which is not usual for large European cities. It is clean there as well as quiet. One would almost forget about usual noisy and busy city life. Nothing unsettled us during our two days there. Prices are, however, quite staggering. 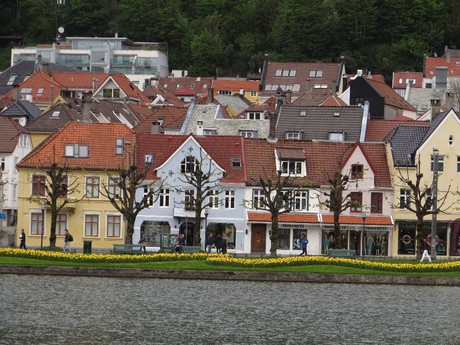 Just take a deep breath of the sea air. It smells nicely of all kinds of sea fruit – you won't regret any money that you would spend for food here. Now we are situated next to Vagen port (on Torgetu). There is a fish market, one of the greatest attractions in this city. You can buy there everything from shrimps, salmon, crabs, whale meat to caviar and many other delicacies very neatly arranged. Make sure to taste something. What I can recommend is a plate with a mix of sea animals. Those who like this sort of food will heave a feast (for about 1200 Czech Koruna). 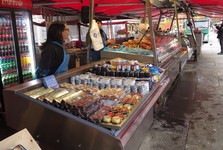 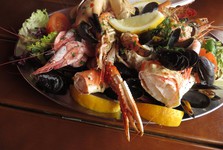 What sort of buildings are on the other side of the port? We can spot wooden houses of Bryggen district. Once one gets closer to them, he wonders how can they still be standing. They seem so... crooked. There are many stores in these UNESCO protected buildings. You will travel back to another century while walking among these houses. 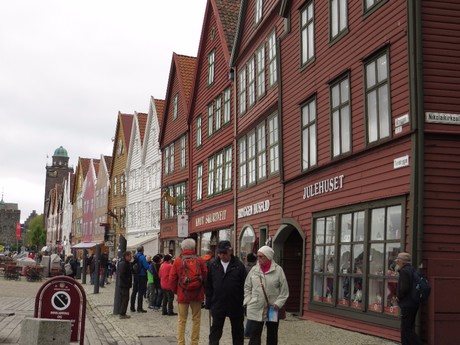 There are many districts within the city with buildings made of wood. Go down Skottegaten street or Lille Øvregaten where you can find many beautiful wooden houses. As we walk down Lille Øvregate street we get close to the terminus of the amazing Fløibanen cable car. The rain typical for Bergen finally stopped. The wind blew the clouds over  Fløyen mountain (Widmill in Czech) away. Thus, we could get a glimpse of Bergen from 320 meters of altitude. It costs 90 Norwegian crowns to get back (about 270 Czech Koruna) for an adult. A minor ticket costs a half less. A one-way ticket is also 50% off. To get some beaeutiful vista over the city, just get up to the mountain. If you are tired of people and you want to get some rest of the omnipresent crowds, just go to forest. In 10 minutes walk you will get to quiet Skomakerdiket lake. Many also take a walk down from the summit back to the town (45 minutes of walk). If you intend to get a vista from another angle, Ulriksbanen cable car can get you up to Ulriken mountain. It is sure worth a visit. 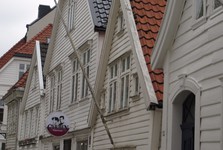 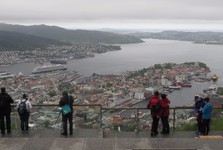 to conclude, I would like to recommend you the cheapest car park near the center. You can find it adjacent to the bus terminal (at Bergen Storsenter mall) for 450 Czech Koruna a day. There goes a nice road which follows beautiful lake with Lille Lungegårdsvan fountain, a grandiose summer house to city's main avenue Torgallmenningen. Visit these places for sure for they add to city's atmosphere. 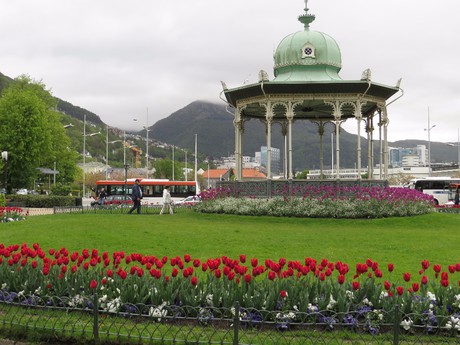 Published: 2.2.2017
Many people know Troll tongue. This vista is nothing but world-famous and is considered among the most beautiful vistas on the face of the earth. So naturally we did want to see it with our own eyes. Even though we landed in Bergen, we rented a car so in three hours of ride we reached the beginning of the trail. Tyssendal village is essential place on the trail to Troll tongue.