The bus takes us to the Bygdøy peninsula which is called the isle of museums. All three museums there are really worth visiting. We begin at the Museum of Viking Ships. The building itself is very interesting. It was designed to house three viking ships exactly. The oldest one was built as early as 820. All ships were found around Gokstad and Oseberg and Tune. Acutally, they never saw open sea. They were used for burial purposes and held remains of high ranking people, dogs, horses, or a peacock. There were found also parts of furniture, special tent supports, tools, jewelry, wooden sleight, carriages and many other items. Some were even impossible to say what they were used for. 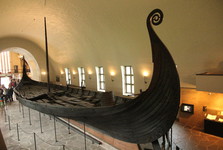 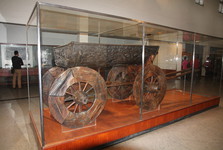 We encountered another beauitiful thing inside The Fram Ship Museum. There we needed to travel by bus. Fram, a schooner, is the most famous ship for Norwegians. The famous explorers Amundesn, Nansen and Sverdrip undertook expeditions into the dangerous waters all around our planet. Fram means "forward" in English.  The museum was opened in the presence of King Haakan in 1936 already. Once the ship was pulled out of the sea it was renovated and walls of the museum were built around it. The collection had expanded in the following years. Today it represents a detailed look at the history of polar expeditions. Moreover, it also shows Arctic and Antarctic fauna and flora. Fram is 11 meters wide and 39 meters long. What we found great was that you can enter the deck of the ship and see everything upclose - cabins, ship doctor's office, the bridge, steer the helm... 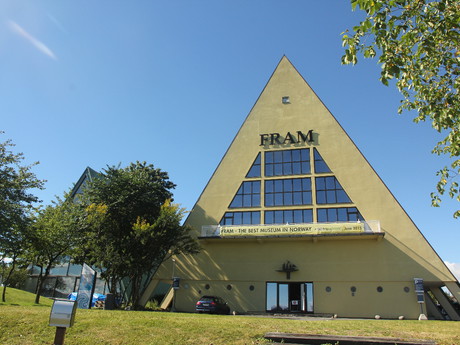 The ship was constructed to whitstand extreme polar conditions. Originally Fridtjof Nansen ordered its construction. He intended to prove that the sea current would take Fram from the shores of northern Siberia across norhern pole to southern Greenland. His theories proved right. The ship freezed into ice on the sea which took it to the northern pole. Nansen left the ship after some time and walked to the north pole. Still, the ship's voyage was a success. He retruned to Oslo in September 1896 and was celebrated.

The ship set off for another expedition in 1898. This time its leader was Otto Sverdrup who intended to explore the northwestern coastline of Greenland and sail around the entire islend. He was not successful yet four years later he would bring a significant collection of fossils, plants, and minerals gathered in the Arctic.

Roald Amundsen used this ship two years later for his voyage to Antarctica. He reached the Ross Sea which is the southernmost of all the seas. 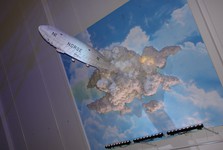 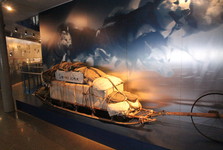 Gjøa ship is another interesting thing in this museum. A building was constructed for this ship similarly as in case of Fram. Both parts of the museum are linked with an underground tunnel. In Gjøa Amundsen became the first man ever to successfuly traverse the Northwest Passage above Canada's north shore. Several centuries earlier, British attempted to do the same, however, they were unsuccessful. Spending several winters in the frozen sea Amundsen studied the ways of the Eskymoes as well as their ability to survive in such cold environment. He wished these great people were not spoiled by our civilization. You can see his large collection of Eskymoes in the Ethnographic Museum in Oslo. Only after three years Amundsen managed to traverse between the islands in the north of Canada. He left the frozen ship, took skis and set off to Eagle City to tell the world he traversed the Northwest Passage. 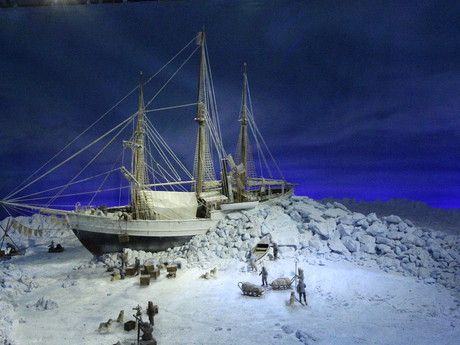 Kon-Tiki Raft Museum is interesting as well. The significant Norwegian scientist, writer and traveler Thor Heyerdahl starting in South Americe crossed the Pacific Ocean when he reach Polynesia. You can also see RA II, a boat made of papyrus by which he crossed the Atlantic.. 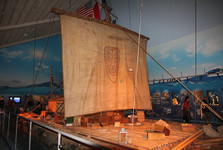 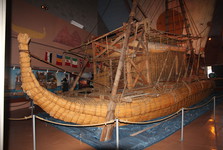 Certainly you could spend here a lot of time. We don't have it unfortunately. Mere three hours later we need to leave the Bygdøy peninsula for a tour in the city.

Next Saturday, we take you to Oslo.