The modern building was constructed between the years 1933–1950. It was designed by the architects Arnstein Arneberg and Magnus Poulsson. The town hall is known all over the world. In its main hall Radhushallen is known for the Nobel Peace Prize Ceremony which is every year on 10th of December. The oil painting of by Henrik Sørensen – „Work, Art, and Celebration“. It is the largest oil painting in Europe (it spans across entire wall). However, it is not the only painting here. Other painitngs were made by the best Norwegian artists. 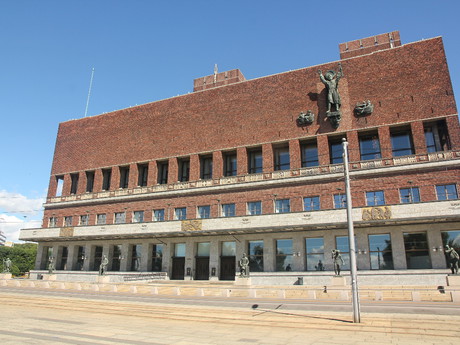 In addition, we would like to mention the statue of St Hallvard, the patron of Oslo. The statue is situated in front of the entrance to the town hall. The legend has it that he attempted to save a woman from bandits. They killed him and threw him down the fjord with a millwheel tied to his neck. Miracuously he emerged from the water and was declared martyr.

We walked through Rådhuset thoroughly. Now it is time to see the city. We walk by city's theater and then walk onto the main avenue – Karl Johanns gate. The most important landmarks are sitauted down this street.

Our tour starts at Slottet royal palace. It is and was the official residence of the Norwegian royal family. It was constructed in the mid-19th century. Then it was the residence of Charles XIV who was the king of Sweden and Norway. The palace is built in the classicist style. Around the palace, there is a park with statues. Below the palace there is the statue of Charles Johan. Moreover, there is a little yellow house at the edge of the park. It is the Nobel Institute. In his last will, Alfred Nobel stated that the peace prize may be awarded only in Oslo. 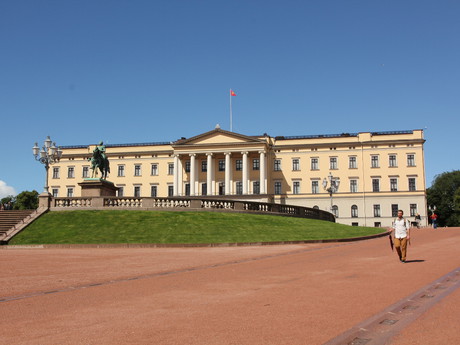 Let's get back to the boulevard – we are heading to Stortinget, a building where the parliament is. Don't expect anything interesting hidden behidn the name. It literally means parliament. The original 1866 building had to be expanded for many new bureaucrats were hired. The parliament has two wings. Several buildings around it also belong to its compound. Hotel GRAND, one of the most famous hotels in the city, is situated right opposite to the parliament. 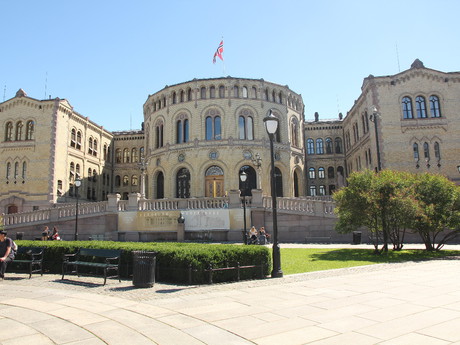 Now we move to the town's market. Opposite to it, there is another destination of our walk – formerky it was Our Savior's church now it is Oslo Domkirke. The cathedral was constructed in the 17th century. In 1950, there was a significant reconstruction in the occassion of the 900th anniversary of city's foundation.

There our tour in the city gets slowly to its end. The most faithful move on to the opera on the riverbank behind the train station. The new opera building also known as Grand Opera was built in 2008 in the Minimalist style. It is made of concrete, steel, and glass. Its architects intended to build an object which would resemble an iceberg which is sinking into the fjord. The design of the opera has received many acclaims. 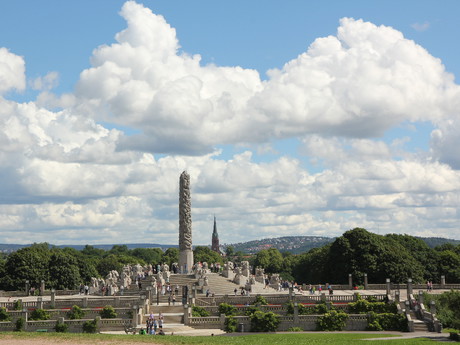 The last thing here is a walk in  Frognerparken municipal park. The name doesn't say much. More commonly the park has been known as Vigeland for there are over 212 steel, granite, or bronze statues all made by the popular Norwegian sculptor Gustava Vigeland. The overarching theme here is family, i.e. parents and children at play. However, the sculptures had not overwhelmingly warm welcome for they are naked. And not everybody likes this fact. The most well-known statues here is the Monolith. It is a 17-meter column consisting of 121 human figures. It took 3 stonemasons 14 years to complete. 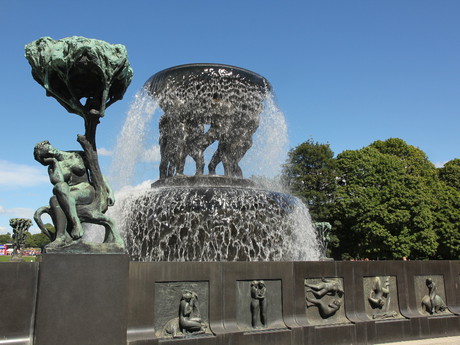 Next Saturday we will continue to the town of Dombås and we will see some beautiful Norwegian nature at last...