We reach the parking lot at Gjendesheim at around 10 a.m. Classic route starts at Gjendesheim and finishes at Memurub. You can take a boat on your way back. The route is of mid-difficulty. You need 6-7 hours to finish it. However, your reward would be a vista over two lakes at the same time. There is Gjende which is the larger one and Bessvatnet which is the smaller one and at higher altitude. They are also of different colors. Gjende has greenish color and Bassvatnet is dark blue. Clay is responsible for green color. It is getting to the lake with water from melting glacier. The trail is 13 kilometers long. The total elevation is 759 meters. 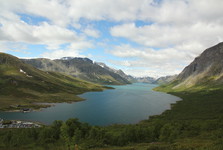 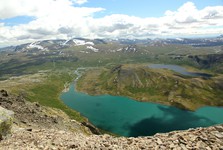 We have to add that our group doesn't intend to cross the entire trail. We have not enough of time. We won't reach Memurubu yet we are still about to experience a beautiful trek.

Finally we are climbing. The terrain varies. There is stone stairs for a while, then little stones, bit of mud and snow fields at higher altitudes plus two exposed areas. The first one is more difficult than the other one. You need to get over the part with smooth boulders which are slippery even when its not wet. The entire route is very well marked. Red letters "T" follow you all the way and make clear where the route goes. 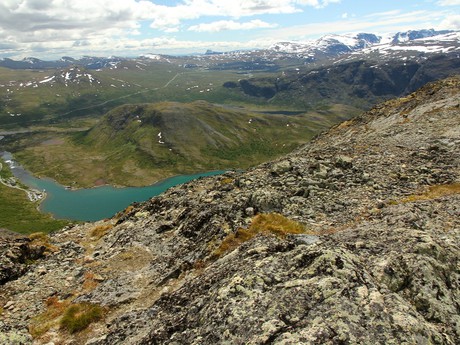 Step by step we climb up. There is one peak, then another, and one more... and so on. Mabye you think that you have already won because you are on the top. But this is not true. We are, however, incredibly lucky. It is bright sunny day so the vistas are nothing but magnificent. Nobody knows where to look first. The steepest part begins right from the outset. Then there are flat terrains, and than slight uphill climbs and this goes on and on.

Right below the peak, there is a nice surprise. There are reindeers on places with stronger wind and snow cover. The graze upon grass and are very tamed. We can approach them from upclose and take pictures of them. They have radio trransmitters attached to their necks. After the season, through these transmitters they are directed back into the valley. 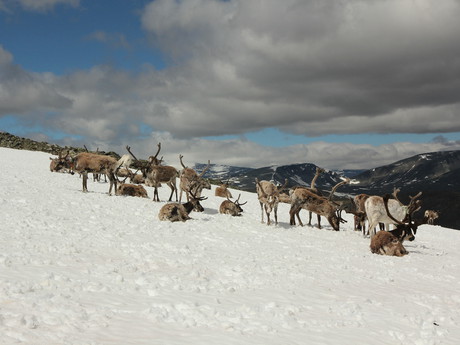 Once on the top, I sit for a while to relax. However, the time goes fast and we have to return. Everybody who has been on the mountains knowns that the descend is much more difficult then the climb. Somewhere in the middle I can't feel nothing but pain in my toes. Three hours later, I am finally at the bottom. It was worth it! 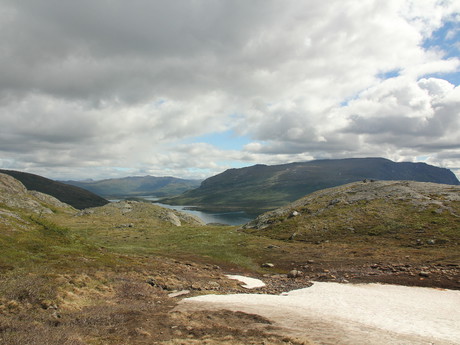 Our stay at Faksfall camp is coming to an end. Cabins are small yet cozy. Toilets and showers are in a separate area. Washbasins have two taps. From one flows only hot water and from the other ice cold. It is quite a work to make the right mix. The camp is great for families with children for there are monkey bars and other children lures.

Lillehammer the 1994 Winter Olympics theater will be our next stop.