Published: 12.12.2016
Jesuit missions are among the most attractive landmarks in Paragueay. I was very interested in such an attraction. I didn't have an idea how such missions look like. The Jeusit missions of Paraguay are mostly along the River Parana and some are also in Brasil, Bolivia, and many in Argentine (the province of Misiones). There are eight Jesuit villages in Paraguay. Three of them are quite well-úreserved. We are heading towards them right now. Missions (native villages) were used to re-education of locals (Guarani tribe) and were built in the 17th and 18th centuries. Villages look very similar. Usually, there is a large stone church with sacristy. Adjacent to it, there are several buildings - schools. Then there are dwellings of the natives. 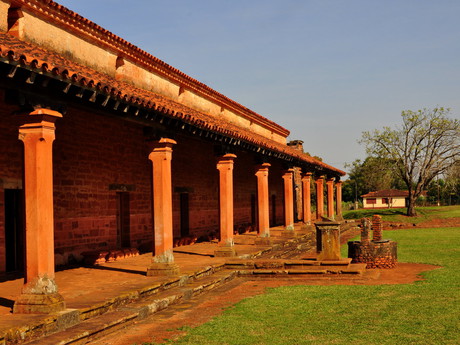 San Cosmé y Damián, Trinidad and Jesús are most well-known Paraguayan Jesuite villages.  It costs shy 5 dollars for a ticket to all three villages which is valid for three days. The first village we visit is San Cosmé y Damián. It would be worth visiting even had there been no Jesuit missions. It is about 20 kilometers to the south from Coronel Bogado on the River Parana. This quiet village consists of several houses, coast guard (Parana River creates a broder between Paraguay and Argentine), repaired sqaure and a planetarium. You can visit the latter with the aforementioned ticked (there is night star observation, daily excursions, and a planetarium). Red dust covered roads c cross here. There are low houses around. People sit on chairs in front of these hosues and they sip tea. They smile and don't care about the time. 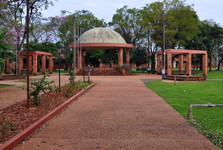 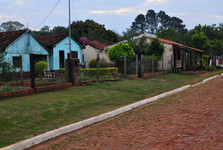 We spend one night here. Right in the morning, we set off to see the ruins of jesuit missions. The tour starts in a partly-reconstructed church. There are items of original equipment of the church on display inside (statues, chairs, paintings etc.). All walls are made of stone, roof frame is visibly decorated. Roof tile coverd the roof. There is a porch in front of the many residential sections of buidlings. It is a common thing so residents would be able to sit outside regardless it is hot sun or raining. Let's walk through classes of local school. There are still original bench and a board. outside, there is a sun dial. Even thoguh its grooves are faded the sun dial still works. 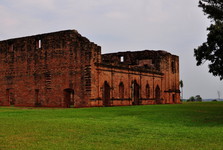 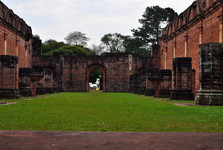 Then we visit an observatory nearby. It was clouded yesterday so one couldn't observe stars. Today, they at least played us a sample of their night sky. Then they would play us a documentary about Guarani natives. They read from the stars when it is harvest time and other periods of a season. In 1706, Buenaventura Suarez arived at San Cosme. He was not just a Jesuit priest, he also was astronomer. He was the first one to map local sky and he also made a telescope. There is an armillary sphere on grass in front of the observatory. It enchanted me. Depending on the sason of the year set on this sphere and the location on the ground (according to the cities carved into the steel of the armillary sphere) you can actually see where are stars, planets and constellations at a given moment. 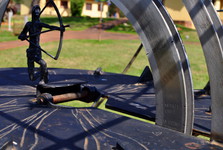 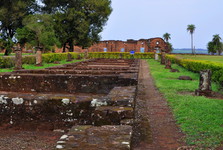 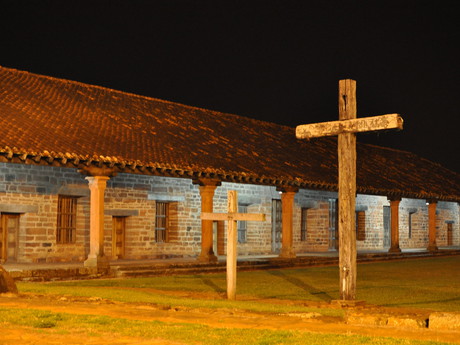 Trinidad, another mission, is situated 30 kilometers to the east from Encarnacion. The ruins of Jesuis missions are 12 kilometers away. It is a vast green space with several trees and orange trees. In the middle of this garden, there is the ruin of a large stone church. The ruin is larger than the one in San Cosme. Yet it is not such well-preserved. There is also a school. Originally, natives learned European traditions there as well as religion. Then there are several Native American dwellings. Today, they look like low stone walls. 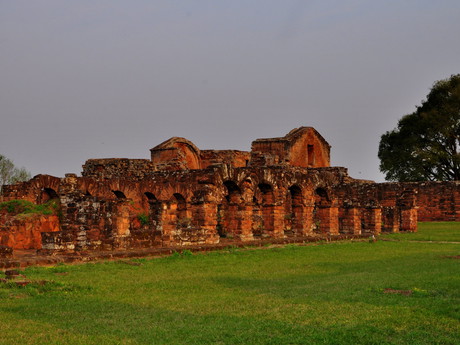 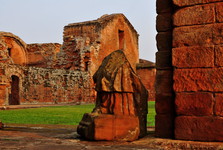 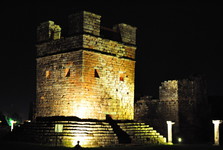 Trinidad is the largest and best-preserved village of all. A stone church is the main

landmark here and there is a crypt inside. Stones are very well processed and there are all kinds of motives carved into them. There is a massive stone pulpit.  There are many other buildings with the compound including native American houses, schools, or a stone tower - former belfry. Many artifacts were found there including human bones.

Trinidad village was put a nice ending to our trip. We walk the ruins with a guide in the evening. Contemporary music and forest sounds accompanied our tour. As we are slowly approaching the large temple, spotlights one by one trun on. They lightly illuminate stone buildings of Trinidad. It is an impressive show and it wraps the atmosphere of the past few days. One feels like he is back in the 18th century.

Published: 14.11.2016
Before we get to Asuncion we need to ride through Gran Chaco which spans across Argentina, Bolivia and Paraguay. It covers most part of Paraguayan north where most of the war with Bolivia took place in the 1930s. Paraguay won it. The reason for the wall was that both parties mistakenly believed to hold oil resources. Today it is just empy wasteland covered of grass and trees.

Published: 19.12.2016
The last place on our two-week journey across Paraguay is a city in the east of the country – Ciudad del Este. For many goods being smuggled through here it has been called "South-American supermarket". You can buy almost anything in busy streets in downtown. Brasilians and Argentinians go here to buy all kinds of goods mostly electronics whic is cheaper in Paraguay than in neighboring countries. The city was founded in 1957. Today, there live almost 400 thousand people and is the second largest city in Paraguay. The city lays on the River Parana (the second largest river in South America). The city borders with Argentine and Brasil. The Puente de la Amistad (the Bridge of Peace) links it with Foz do Iguazú.

Published: 5.12.2016
The city of Encarnacion (the capital of Itapua departament) is situated in the south of Paraguy on the River Parana. The river makes a natural border with Argentina. Perla del Sur (Pearl of the South) is how people call this city of 120 thousand. On the other bank of the river sits Posadas, a city in Argentina. Both banks of the river are linked by the San Roque González de Santa Cruz bridge. The city was founded by the Jesuits in the 17th century. There are many Jesuit missions in this part of Paraguay. There are some well-preserved ruins that we plan to explore. Now we set aside two days to explore Encarnacion.

Published: 21.11.2016
Paraguay is rather a small Southern American country. Still, its area of 406 750 sq kilometers means it is 5x larger than the Czech Republic. Therefore, tourists are motivated to move slowly and to visit small and quieter towns. We hitchhiked one man who told us that only Asunción, Encarnación and Ciudad del Este are considered cities in Paraguay. The rest are villages. And we would soon find it out by ourselves.

Paraguay – A Country of Contrasts

Paraguay is a country in Latin America without access to the sea. It is situated about 5000 kilom...