en.infoglobe.cz » Peru: My Fulfilled Dream I.

So, I started to think it over and calculate, how to collect sufficient financial means, in order to leave there. According to Vojta, it would be resolutely in cheap style level. I told to myself: such offers for dreams´ fulfillness could not be rejected at all, and shortly afterthat, quite clear matter evolved in my mind. Margaret, Vojta´s school girl-friend and Joseph, Margaret´s college from the office  became the other members of such expedition. Later joined us Zuzana (my college from the office) amd Milan, my friend from aikido course. Margaret and Joseph planned the trip for two months with an idea to visit also Peru and Bolivia. On the other hand, we could not allow so long holiday, so we had to be satisfied with one month stay in Peru only.

The First Acquiaintance with Peru

As we changed our decision in the course of months, the plans as well as the travellers were changed, so, we did not bought air-tickets together. Joseph and Margaret took some Brasilian air company. Nevertheless, Vojta and me used the service of Dutch KLM, for unite price return ticket CZK 16.500, from Munich via Amsterdam. And Zuzana flew with low cost air company from Madrid for CZK 20.000.

So, our trip started from Prague on Saturday 27th March 2010. Peter, our willing collegue, took us to Munich airport. We left Prague at half past ten p.m. and arrived to Munich at half past three early morning the next day. At seven o´clock, the plain for Amsterdam was despatchready. The flight was comfort, without problems. In Amsterdan, we waited for departure of ocean plain for two hours. And now, we expected very long-13 hours lasting- flight to Lima in Peru. Our seats wer situated in the central from three tiers of seats (it was not too favourable position, as we could not be sitting at the window, and could not follow the journey). We solved this problem in such way that we walked in the plain up and down, especially in a moment when we found above South American Continent, at the window, close to toilet, where we were able to enjoy a view, to make photos and work with camera. So, we saw Amazone-river, Ands-Mountains, including marvellous clouds and well developped stormy cumulolimbs. 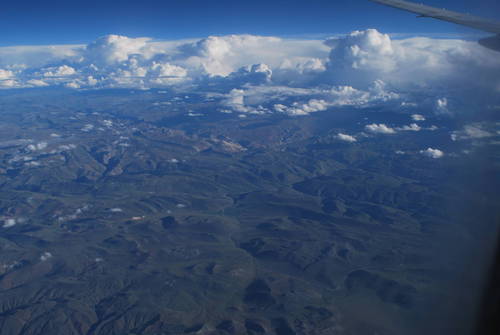 We arrived to Lima at five o´clock a.m. local time. This time is pulled down of seven hours, making comparison to Central European Time in Prague. I was the only one, who was afraid of one matter. „Can we receive our pieces of luggage in time?“ And this unpleasant reality really happened. My luggage from Amsterdam was lost. Anyway, we did not take such fact in tragical way. The luggage was not definitively lost, but it was not managed to load it in time, during short time period for transfer. So, we have received the assurance of KLM company that my luggage will be delivered to Huaraz in the mountains, and no waiting time could be lost in Lima in the meantime, in order to expect it.

We met Zuzana just at the airport. She successfully survived hostel in Madrid as well as the flight (however, she got nearly anything to eat, whereas we were fully boarded during our flight). So, we changed for local currency the amount of USD 500 in exchange office. We obtained Nuevo Sols 2,77 for one dollar. Moreover, I bought in airport automat box Inca Cola (for the first and last time at the same time). It is typical Peru beverage, which tastes as chewing-gum. We were ready to leave. We took a taxi (Nuevo Sols 45) and let to be transfered to bus station (Movil Tours company), where we met Margaret and Joseph, who bought the bus tickets to Huaraz at the same time. One ticket costs Nuevo Sols 50.

This night transfer was made on semicarna seats, these are something as bed-position seats. We had some free time available, so, we decided to buy something to eat in hypermarket. Our pieces of luggage were left, after bus tickets presentation (free of charge) in bus station cloakroom. Our departure was stipulated for eleven o´clock p.m. During a drive, we obtained even a dinner in a bus.

Published: 27.6.2010
The town of Munich is situated near to the Alp Mountain Range, along Isar-river. The locality is the third biggest German town. At the same time, Munich is a capital of Bavaria Federal Country.