An acclimatization - the first day

Just at bus station, a man met us, offering hostel accommodation at unit price Sols 15 per a night. This seemed to be as a good price, so we declared that we should have a look at it. We took a taxi for Sols 3 (very cheap price, indeed). We recognized that such way of transport is very common there, and taxi could be ordered and found always and everywhere. After having judged accommodation level of La Cabana Hostel, we decided to stay there. Three bed rooms were clear, with a toilet and terrace on the first floor, where marvellous view of Huascaran (6768 metres), the highest Peru mountain, could be enjoyed. Professor of philosophy, nice corpulent man, hostel owner, welcome us always when saw us: „La Republica Checa!“ or „Checos!“ 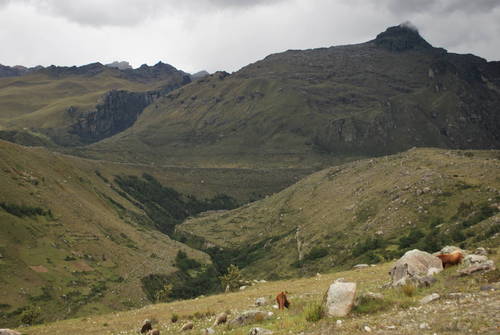 Immediately, when we left our luggage in the room, we set out our first excursion. Regarding acclimatization, this phenomenon could not be underestimated at all, as the respective isobars  are shifted, making comparison to the other mountain areas of the world (as in Himalaya Mountains, for instance), and the influence of the altitude is abased at several hundred of metres. So, our excursion was planned to the locality, placed close to Churup Lake, Cordillera Blanca, situated in an altitude of 4485 metres above sea level. We tried to look for suitable transfer into some starting point. We were forced to walk up and down the town and bargain most cheaper vehicle, as we finally finished upstairs on a body of a carriage, paying the amount of Sols 50 for all persons. 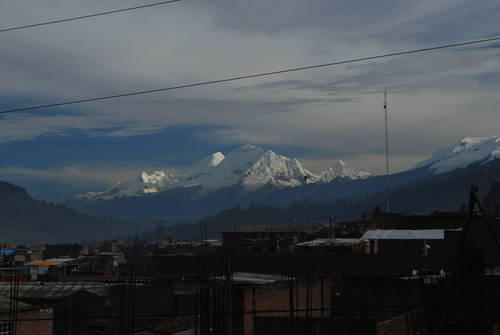 The driver took us to the village of Liupa. We continued our walk upstairs on foot, at hardly burning sunshine and relatively great heat. Nevertheless, we found quite soon that storm clouds (cumulonimbusses) of such forms and dimensions are absolutely not to be seen in our country.  As the geographists and meteorologists,we were very enthusiastic. Anyway, all such clouds  forseen a fact that a rain comes as soon as possible. And really, it happened so. At two o´clock in the afternoon, the clouds-masses dropped a lot of water, and even the hails occured. We were forced to look for some shelter from eucalyptus leaves. As we were found at the storm-corner only, the rain was weakening suddenly, and we could continue our walk ahead. However, our original idea (to reach Churup Lake) could not be realized, as the distance was too far, via a col in an altitude of 3800 metres above sea level.

The river in the valley was cut directly into resistant  mineral stones. We passed the river across the bridge to the opposite part and came down to the village of Yarush, in an altitude of 3300 metres above sea level. Here, we managed to be transported by very cheap collectivo (local public means of transport), for Sol 1 per a person, and left, together with aborigines, back to Huaraz. 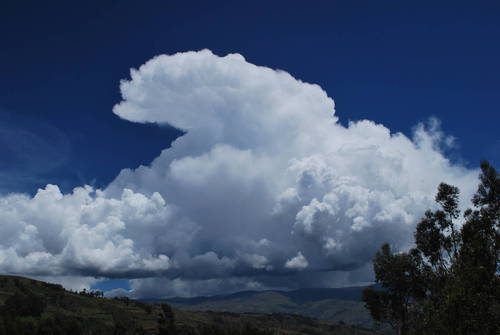 So, in Huaraz we visited local Chinese restaurant to have a dinner. However, I had terrible headache (as a consequence of the height and maybe, my drinking regime was rather neglected). Nevertheles, Vojta was the only one who was able to eat the meal. The rest of our group was influenced probably by high altitude, so we lost completely a taste for eating. Moreover, a miserable man entered the restaurant, watching non-consumed portions on the table. So, we decided to give him all rests from our portions. The man was very pleased and ate everything that we were afraid of a fact that the dish would cause him bad digestion.

Published: 19.6.2017
Chachapoyas town has been considered a paradise undiscovered. Situated in the Amazonas region, tourists travel here to discover beautiful nature, different microclimates, the ancient ruins of Kuélap situated between the Andes and jungle.

Published: 26.6.2017
Cajamarca became famous as place which put an end to the powerful Inca empire. The last Inca leader Atahualpa was defeated by Francisco PIzzaro. Later, he was executed on the ain square.

Published: 3.7.2017
Trujillo is situated in a desert area near the Pacific Ocean. It was founded in 1534. It had good enough fortification to withstand pirate raids. For a while it was even the capital of Peru when it the country declared independence.

Published: 10.7.2017
While in Peru, we couldn't decide to visit or not to visit Colca or Cotahuasi canyons. Some say that Cotahuasi is deeper. Some say it's Colca. Perhaps this is only a way to bring more tourists to both canyons. Both canyons are about 3500 meters. The rivers which carved both canyons out flow through the Ande summits rising as high as 6000 meters above the sea level and end up in the Pacific Ocean. Both canyons feature rare Andean condors.