So, we left Huaraz hostel early morning. All not absolutely necessary things were took out  from rucksacks and were left in luggage room (land-lady got it into a room where some bed-clothes were placed). Nevertheless, first of all, we had to buy entry tickets into Huascaran National Park (Sols 65 per a person, valid for one month). Shortly afterthat, we went with overcrowded collectivo (Sols 7) to the community of Caraz, where we did not managed to get another collectivo.

So, we continued our journey with relatively small motor vehicle (the car had sufficient luggage space, so that all pieces of luggage were comfortably placed there) to Cashapampa, starting point of our trek.(the cost Sols 7). I was sitting in frontal seat, on Vojta´s knees, and our four friends had to be crowded on back seats of the vehicle. However, the drive was rather unpleasant, full of mud-holes, but, finally, we overcame all this with pleasure. We were astonished that this way would be worth for this man to be effected. 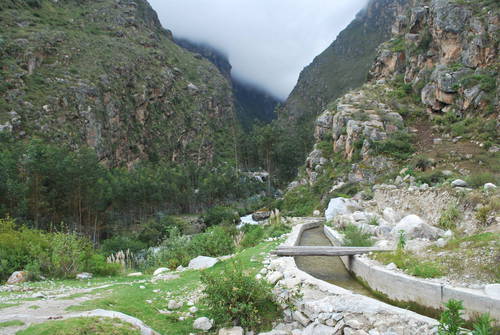 We made small stop in Cashapampa, in order to prepare our sticks, take a refreshnent and make some photos. We met four small vamped boys. I had prepared some sweets for such occasion, so I tried to offer it them. However, I made elementary fault, showing them the whole bonbons´-packing. All took handfulls, and only one fourth of bonbons remained in packing. So, later, I gave to each child one piece only. 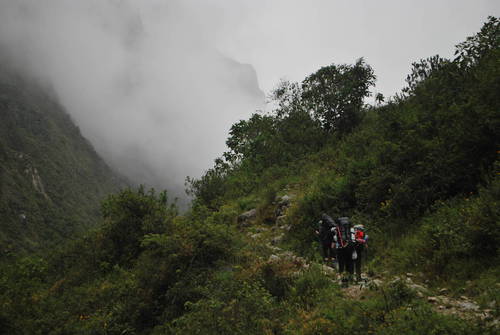 Just from the beginning, small flies started us to sting, and we were attacked by them during all the march. This was very unpleasant and the spots were expressively tickly. However, the repelents (we had a lot of types) helped us only for a while. A great red spot with bloody „crater“ in the middle, there was established after a bite. However, I am rather alergic for such stings, so I was forced to be awoken in the night, in order to stick my legs with Fenistil. Anyway, the bids itched me even two weeks after the return. 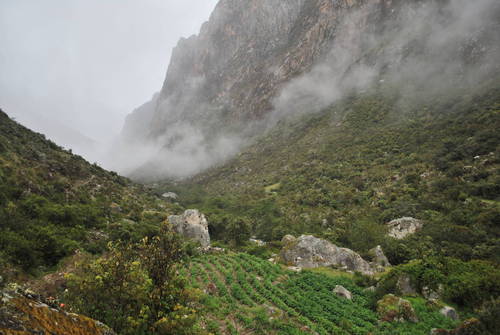 The trek started with steep climbing. It was rather great effort for our lungs (pneumonia), and we mounted rather slowly ahead. The difference of 800 height metres makes the distance of six kilometres approx. Despite such hard start, the climbing was relatively moderate. An immense quantity of vegetace was growing around us, we liked mainly bromelia, situated on trees and rocks.

The sky was full of clouds. And the rain came quite soon. We put on our capes and continued ahead. We saw that rain period came and will slowly change into dry period. The river was rather inundated and the water flooded the way on some places. We were forced to take off our shoes and bathe or squeeze through the vegetace along surrounding slope. Finally, we decided to have our camp, at six o´clock p.m. after dusk, on a place where we found sufficient space for three tents. However, we had to hunt away the cows, as they wished to have their claim for such type of space. Vojta went to toilete, and stuck, unfortunately, a thorn of treacherous cactus into his foot (good luck that it was to his foot only!). The rain did not stop, so we did not prepared a dinner at all and went to bed as soon as possible. 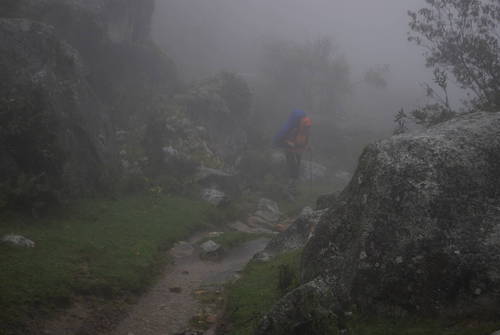