So, just in Llamacorral camp, we took advantage of nice weather to take a refreshment and have a rest a little. The route passed around two lakes - the smaller one, completely overgrown, rather dirty Ichicocha Lake and Jatunocha Lake, greater and more transparent one. However, very heavy rain came later. Pepa and Markéta mounted in front of us, as we went up rather slower. 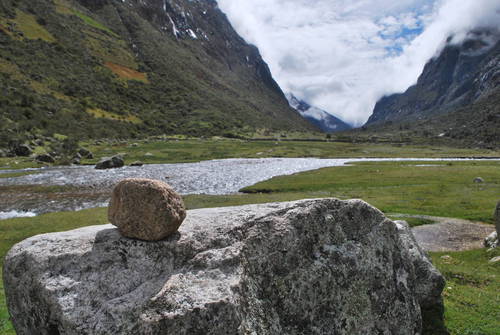 Our today´s target: to cross Santa Cruz-river. When we (four persons) decided upon such action (our friends just reached the opposite part), the river was very violent and even deep enough in its transverse profile. Vojta and Milan expressed certain form of effort to ford a river, however, any attempt was unsuccessfull. So, after one hour´s waiting, we returned along the stream, in order to find more convenient place for watering place. Finally, we found such point and crossed to opposite part of the river. We found that Pepa overcame the river in a place, where we did not make it. Nevertheless, it was not best idea, as he had a bathe. So, now, he was overcoated in all his dressing, which was available. In camping ground, we found places without droppings, constructed tents, cooked some meals and played most popular play of our journey - „Rošády“. Our camp - Quishuar - was situated in an altitude of 4000 metres above sea level. 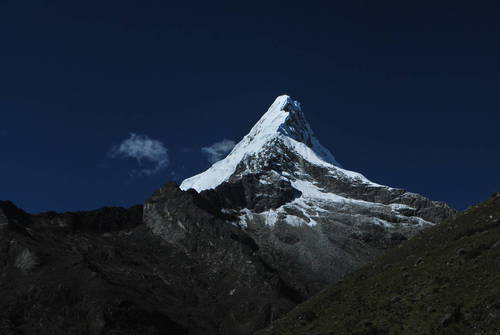 The third day of our trek was declared as Rest Day. So, we decided to leave all our belongings in camp and mount to base camp of Alpamayo Mountains, marked by mounteneers as one from most beautiful peaks of the world. The mountain is 5947 metres high. The sky was without clouds. At the beginning of violent climbing (it was quite easy, when you are not forced to carry heavy rucksacks), we enjoyed delightful views to surrounding mountain peaks, covered with ice. It was not only fascinating Alpamayo, but also Artesonraju (6025 m) placed in opposite part of the valley. This peak is allegedly pictured in Paramount Pictures Logo, surrounded with small stars. Later, behind violent zig-zag turning, the mounting was quite moderate. 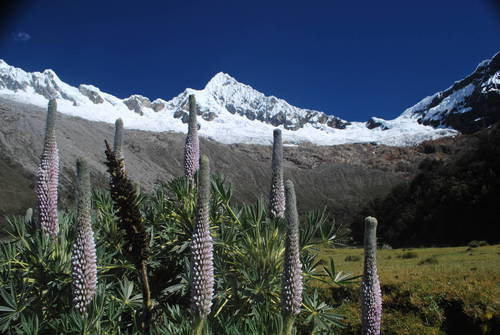 In base camp (4300 metres above sea level) we had a rest, and, after a while, we continued our climbing towards Arhueycocha Lake. We estimated that we could overcome it within half an hour. Nevertheless, Vojta proved to be more sovereign, and declared that he could do it to the moraine, damming the lake, within five minutes. These estimates were concluded in a bet. Anyway, he conducted as a professional sportsman, but he did not caught it in five minutes, but he reached the lake within six minutes. Despite this admirable performance, he lost a bet, with a result that his duty was to prepare a dinner. 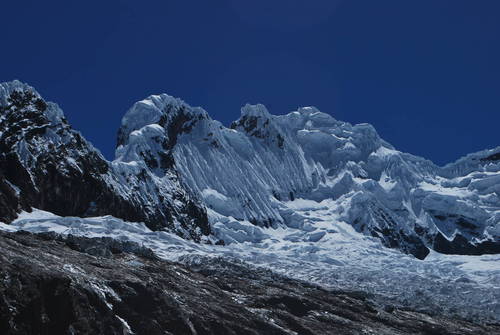 The lake is really wonderful. It has genuine glacier milk colour shade and a coldness radiated from. No wonder, the glacier is mounting there and even the pieces of ice are to be seen on water surface. We descended there, in order to enjoy such scene and to wash our feet. Most of us would not taste such ice-cold water, only Milan tried it, and submerged his body in the lake.

The views around were really fascinated. You really did not know, what to admire at first. Moreover, the wealther was sunny and wonderful. When even appeared so cloud, so, it was from the reason, in order to be changed a look of some of surrounding peaks and the views became more charming in such way. The geographical position of this area, close to the equator, is not to be renounced. Near to Alpamayo, in an altitude of 4000 metres above sea level, where the trees are growing, whereas such stone seas, snow and ice are to be found in hundred meters higher. 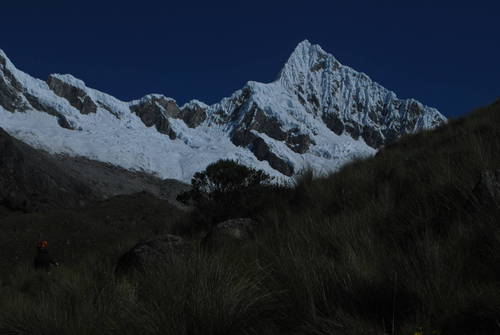 We found, after the descent to our camping ground that all our belongings are O.K. Nobody robbed us despite the fact that he could improve. The mounteneering equipment (outfit), tents, sleeping bags or rucksacks, we did not took with, and left it on the place, and, we were afraid of, to tell the truth. 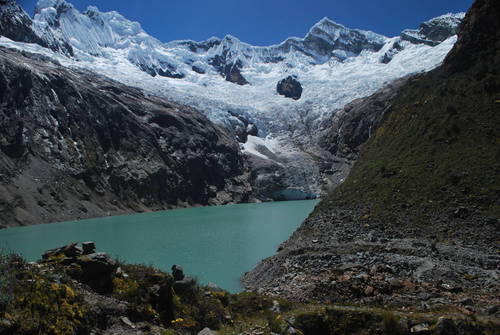 As it was not late, and we all felt quite active and full of power, we decided to make our next walk easier (from tomorrow´s climbing to the col), we packed our belongings and continued our walk. We climbed up 200 heigh metres, crossed big meadow, where several tents were placed (we did not met many persons in the mountains) and arrived to a place below a col. We liked it there, so we constructed a camp. Later, the sky became cloudy, but a rain was light and short, and the clouds, illuminated with sunset, served as an object of our photo-cameras. Vojta prepared for dinner all meals, he brought on his back, so that we ate fully, and the baggage was more light. As a final  point of today´s rest day, we played, with forehead lights, popular „Rošády“ play. Anyway, Zuzana was not too concentrated, as her view was still fastened to south star sky, where she was trying to find various star constellations and enjoyed fully thiese moments. 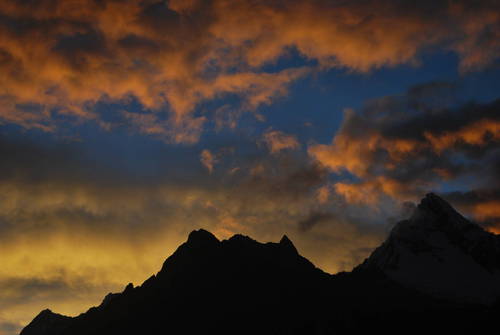