We mounted up along winding way, and, to tell the truth, it was quite difficult. I panted hardly like an engine but I marched on. Circular views towards the valley, we walked through, were very nice. We saw two lakes, we passed yesterday, and had the chance to perceive another one, Taullicocha Lake. 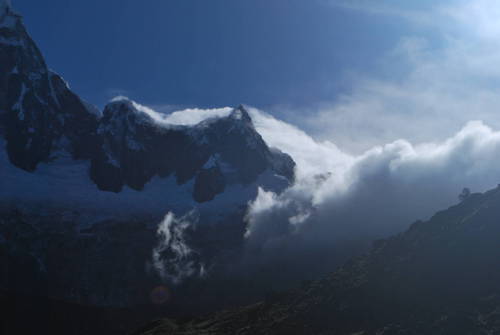 Anyway, after two and half hours´ mounting, we reached Punta Union Col. Shortly afterthat, some other people and one donkey came upstairs, and the col was suddenly full of persons. However, the sky became cloudy and it started to rain. So, we continued our descend to the opposite part of mountain range. The weather was really bad, and we, dressed in capes, had to overcome such rough terrain. When we arrived down at the river (it stopped to rain for a while), all boys took a bath there. Nevertheless, it begun to rain again, and we were forced to continue our march ahead, passing a way, turned into mud. At four o´clock p.m., we started to look for a place where it would be suitable to spend a night. Frankly speaking, it was not too simple to find suitable place among cow-dungs and a surface, imbued with water, but finally, we found it in Hauripampa camp, in an altitude of approx. 3700 metres about sea level.

In the morning, we got up quite early. The rain stopped. Anyway, this situation repeated every morning. As we assumed that the next  heavy rain would come soon, Marketa and Pepa decided that they gave up the climbing upstairs to Pisco Peak. On the other hand, we did not have any objection, this situation meant for us to have more time reserved for the other localities. So, we had the last day for such trek. Our intention was: to transfer to the village of Vaqueria, and to take colectivo or another means of transport back to Huaraz. So, we had time enough, as the distance was not too far, and we were not in a hurry, so we packed our belongings without stress. So, we made our exercises, washed our shoes and trousers, full of mud, and disinfected darkened water by means tablets or drops. We made such proces during each trek.

When we left the camp, we met group of Indians (women and children) who hunted flocks. We gave small children some sweets, whereas the adults received, on their request, several tablets of Ibalgin medicine. After a couple of minutes, we met another group of local persons. This time, small boys with herd of goats and some lamas met us. Except tourist lama in Huaraz, these were the first animals of such sort, we met in Peru. 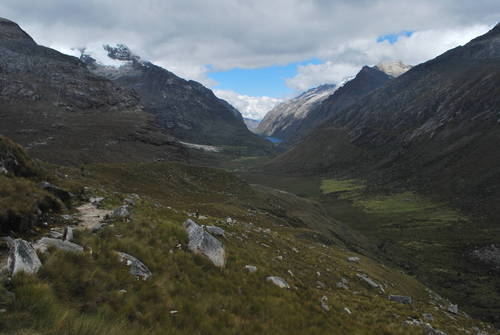 The next way let us across Huaripampa village. We found there many tourist tables and inscriptions of type, such as „tourist restaurant“. One poster referred to guinea-pig farm. We met many children, they tried to beg for bonbons, so we distributed some sweets to all. Anyway, at the end of the village, we knocked against a control. The men required the tickets for the entry into National Park. So, the conclusion of our trek we spent in curves in direction upstairs to Vaquerie. Here, we waited for colectivo bus, but we were unsuccessfull. It is a fact that tow colectivos passed but they were overcrowded. On one bus upstairs on the deck, the persons were sitting even on the roof. So, it was impossible that six persons with voluminous rucksacks would be placed there. We bought local beer „Pilsen“ in local shop, relaxed, and waited for, which carriage will arrive. Nevertheless, a donkey, several hens and pigs, eating greadily their feeding, passed us. 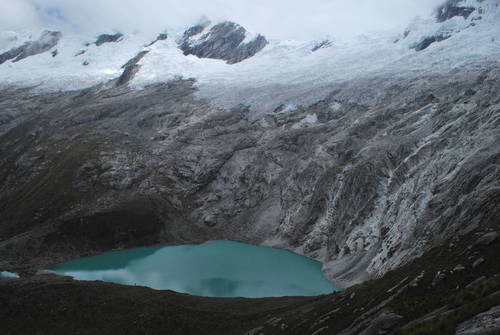 Suddenly, one vehicle arrived, taking workers on carriage-body. Obviously, they returned for a shift after Easter. We paid a small charge and were allowed to enter on board, with a promise that the vehicle would take us to Yungay. Anyway, we thought about that we let to be taken up to Huaraz. The drive started really in perfect way. Circular views from the car deck were marvellous, indeed. The vehicle mounted along twisting way upstairs towards the col. We could follow the peaks of mountains around (including Huascaran), the lakes, rocks, it was a splendour! However, it was impossoble to take photos or make films with camera, as the carriage was jolting too much. So, we could not make pictures of such marvellous valley, including Llanganuco Lake. 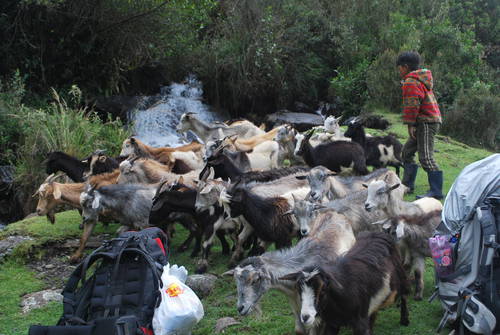 Shortly afterthat, when we ovecame a col, the sky was covered with clouds and a rain begun. And that was nothing to be laughed at! The Peruans, in order to solve this problem, threw wet tilt over carriage-body.This would be O.K., if such tilt would not be terribly dirty, so that we were immediately covered with mud. So, Zuzana´s and Milan´s hats, originally snow-white were completely changed. We prayed  to be soon in Yungay, and we left our thoughts to continue the journey up to Huaraz, on carriage-body of this vehicle. Anyway, the drive took four hours, and, it was good luck, that we overcame it in good form. So, the episode with a rain and a tilt arrived later. 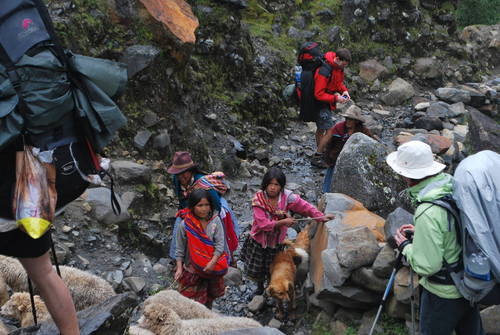 In Yungay, Pepa contacted two taxi-drivers, they were ready to take us to Huaraz. So, we trensferred in two cars back to Huaraz, La Cabana hostel, and so, we made a dot after our first trek in Peru.