The beginning of such episode started in rather surly opening of our eyes. This action happened on 8th April, at 3,30 h in the morning. We had to catch the bus to Mollepaty, the starting point of our trek. Anyway, the departure was stipulated, as we found, after five o´clock a.m. So, we packed our belongings, the other pieces of luggage, not necessary for the moment, were left in hostel safe and we started our trek. Inside the bus, a group of another organized tourists and local persons were sitting, when we came there. 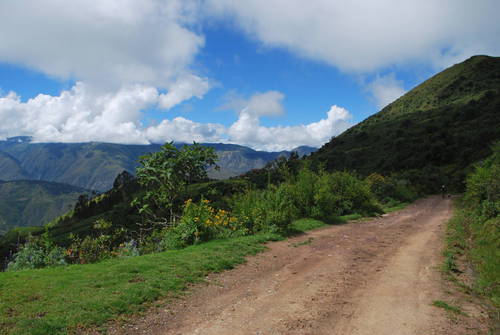 I slept during all three hours drive. It is a fact that I was accustomed soon undisturbed sleeping in the bus. We took our breakfast in Mollepata and studied the guide-book again. We were informed that the first day of this trek could be saved by transfer by means of any vehicle, provided you would be successfull in getting it. So, Pepa started to look for it. And really, we managed to go on board of carriage-body, transferring local persons (aborigines). We met there one Indian-woman with one-year old baby. The woman looked like a grandmother, but, according to experience, I knew that she was a mother. The charge for the journey cost us Sols 5 per a person.

In Cruzpata, we left  carriage-body board. It was not our target to be transferred all the day, we must be forced to be in movement! The way was winded in monotonous way. We walked on non-asphalted road, in twisting direction upstairs. And shortly afterthat, we saw some white hill. At first, we thought that it could be Salcantay, but after tea-break we found that this mountain was Humantay. 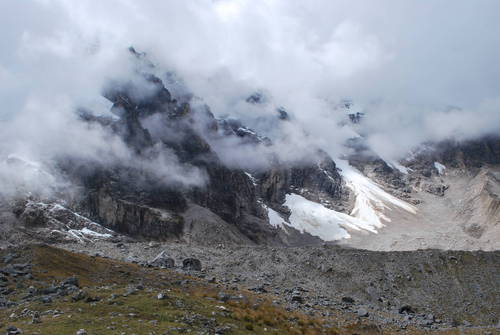 At two o´clock p.m., the rain arrived. We continued our mounting, dressed in capes and came Soraypampa, situated in an altitude of 3975 metres above sea level. So, here, the second trek-day would be terminated, according to guide-book. Nevertheless, we did not wished to camp just on such place, so we continued ahead. It is true, that there was a problem to find a suitable place for tents´construction, but, on the other hand, we could enjoy delightful views towards fascinating Salcanay.

We prepared our dinner, ate, and started to play dices. It was rather darkness when somebody of us saw some light moving in distance. All started to follow it and got frightened, that it could be some villainous wretch, ready to pillage or even kill us. Nevertheless, we decided to go to bed. A storm arrived in the night. Later, in the morning, when I went out for a toilet, a I was very amused, seeing that in far distance, where the light could be followed, I saw a group of buildings!

The next day, we got up at seven o´clock a.m., and after nine, we continued our trek. We had the intention to go across a col and descend down in two thousands of height metres. Anyway, first of all, we had to overcome seven-hundred metres mounting, mostly on zig-zag way, named as 7 Culebras (Seven Snakes). On a top of the col (in an altitude

of 4600 metres above sea level approx.), we had a rest on great stone and made group photos. But we felt a cold soon, as a consequence of strong wind, so we continued our descend. This was managed quite comfortably. From the very beginning, the sinking was quite violent, shortly afterthat the slope decline was decreased and we walked throughout interesting countryside. It was big plateau, covered with big stones. Some of them were full of interesting red stratta. In the right direction from us, deep cut river-canyon appeared. Moreover, a fog was created changeably around us.

We dropped from such desert stone environment. The vegetace was appeared slowly, and the way let us finally directly to mountain jungle. We descended up to official camping place, where several ten

ts were to be found. Anyway, we did not wished to stay there, so we continued our trip ahead. However, we did not have any idea, where our next palce for tents´ construction would be found. We passed  the river across a bridge and reached some buildings, just at the dark. Pepa left us, in order to investigate the situation, and returend with very positive message. Local people permitted us to spend the night in the courtyard. The persons were very polite and sympathetic. So, we accommodated there, after a a Rosada-game, we went to bed, just in a moment when the rain came. Later, in the morning, we could enjoy marvelous views at afforested hills, spreaded around us. And moreover, a small green parrot observed us. 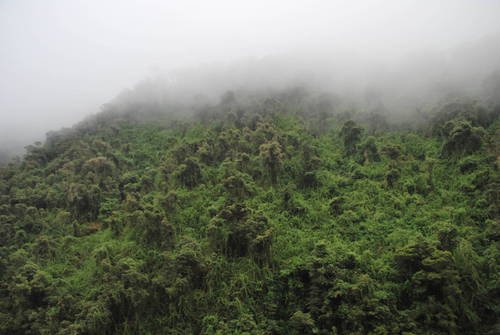