I was really afraid of the fact that enormous crowds of people come there, in order to see and enjoy such place. On the other hand, I knew and read that local persons would like to profit from tourists as much as possible, so they are obliged to pay big amounts of money. Nevertheless, the majority of my friends declared that it would be a sin not to have a look at such locality, when we travelled to Peru, so I adapted to such reality. I was ready that the crowds of persons do not permit me to see the monuments in detail, and did not expected any pleasant experience. In general, I was mistaken and I did not regret at all the visit of such magnificent complex. 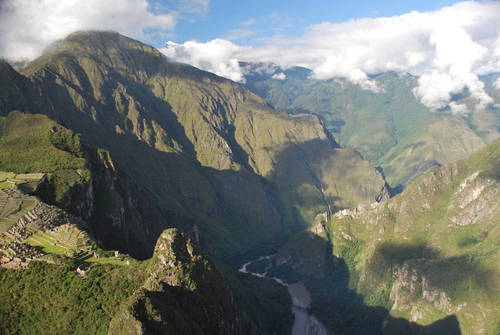 We got up at half past four early morning, in order to reach the bus towards Machu Picchu direction in time. At bus station, we came shortly after five o´clock a.m. and arranged at the end of quite long queue. The first bus left the place at half past five, and we succeded to enter the fifth one. The drive upstairs, along the curves, took approx. 40 minutes.

At the entrance to the area, we let to stamp our tickets, in order to reach Wayna Picchu Hill. From there, there were marvellous outlooks towards Machu Picchu complex, including its environs. However, the time period when we were allowed to start our mounting upstairs, was limited. On the other hand, on the top, we could stay for unlimitate time period. In general, the trek upstairs was quite pleasant, not having heavy rucksacks on our backs, and the outlook (around view) was beautiful. During our return along roundabout way, we visited a cave, which we found in a map. Here, however, there was nothing special to be admired but this branch way, we chose, was pleasant as we did not met any person. 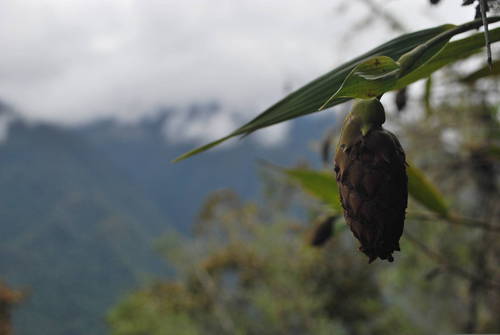 After descent from Wayna Picchu, we walked through Inca town. We saw several lamas. These aninals serve as an attraction for tourists and as efficient „grass cutter“ at the same time. The whole town acted as very arranged locality. The tourists were dispersed, so that we did not seemed to be inside ant-hill or on Wenceslas Square. The reason is: Machu Picchu Area is really enormous, and, to tell the truth, there was not so many tourists there as usually could be. The whole area was, owing to extensive landslips and inundations, closed for relatively long time period (for several months) and repeated opening for public was effected thirteen days only before our visit. 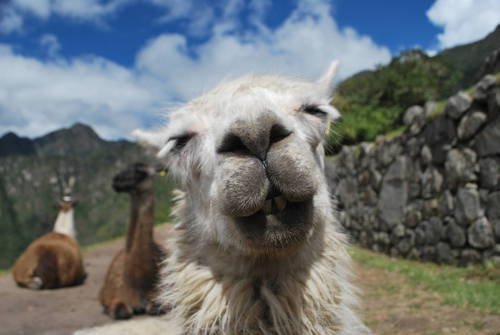 Moreover, the weather could not be better! Within scope of places which we visited in Machu Picchu complex, there was, for instance Puente Inca (Inca Bridge). In fact, it is several metres long cornice, placed inside rocky wall. The bridge itself is made from viusible unsteady wooden boards. The neighbouring stone cornice is rather lamdsliped, so no entry is permitter there. From the bridge, we continued our walk, passing weather station to the other monuments, including astronomical observatory. By the way, we added, from time to time, to guided tourist groups, in order to have the possibility to listen the explanation in English. The last stop, after more than ten hours, spent in Machu Picchu, we made at Stone Condor. To tell the truth, I could not recognize a fact that this stone hill could remain really this bird, not having drawn an attention to such fact. 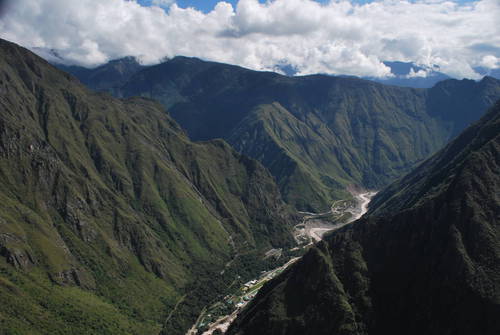 After such cultural event, we felt rather tired. So, we dropped down, back to Aquas Calientes. When we reached this place, Milan tried to get the money from bancomat, but he was not successfull. The machine did not accepted even his chip card. So, he changed later the dollars in exchange office, situated on the square in drugstore shop. The exchange rate was nothing special - one dollar for Sols 2,75.

We had a rest, and we looked for a dinner. The choice of restaurants available was very rich. At each entrance, the persons stood, offering the tourists, passing by, the menu. So, we let to be caught, and took the menu for Sols 15. We received a glass of beer to the meal, and tasted local alcoholic drink - pisco sour - for the first time. This drink was not bad at all! In fact, the pisco is something similar as grappa, mixed with lemon juice, and covered with lashed up albumen. However, our purses absorbed only one glass (Sols 20!). 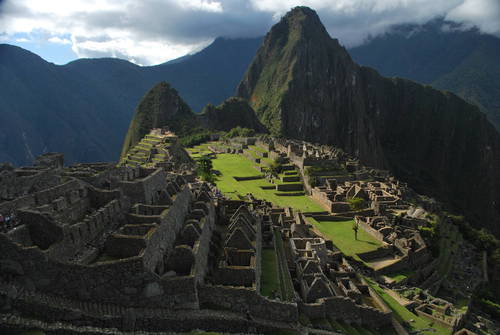 The next day was reserved completely for relax. We intended to make an excursion to Putucusi Mountain. However, all treks were destroyed by recent landslips. So, we spent the whole days, walking throughout expensive markets and in pleasant sulphurous thermal spa.