We were carried out to remote Tambomachay, Inca Spa, distant seven kilometres. The ticket cost Sols 2,50. Entering the spa area, we used fully our multi-ticket (Boleto Turistico del Cusco). However, this monument disappointed us. It was a mass of stones, where flew small water-spring. I personally was of an opinion that we saw sufficient quantity of Inca stones, so I really was not  enthusiastic from each sightseeing of such type. Nevertheless, one exception occured, but we met it later in the afternoon. 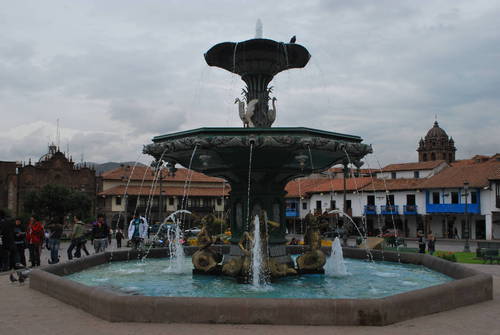 After very short sightseeing of this spa, we transferred to another ruins - Pukapukara Citadel. When we terminated our inspection there, we continued our way to the next point mentioned in our Boleto Turistico. And, to tell the truth, the way seemed to be quite interesting. We passed the houses constructed from the clay, decorated with reliefs, picturing various figures of Indians, animals or subjects. On each roof, strange statue was to be seen, formed with two small bulls with a flag, weather cock, horseshoe and other symbols. All such objects would house inhabitants protect against bad ghosts. Close to the houses, house pigs were standing, eating their feeding available inside cut tyre. By the way, we got a greeting from dready dog.

In the meantime, Milan bought from local woman cooked corn with a piece of cheese. The corn had very strong grains, I never saw it. Tasting a bit, I was forced to accept that this food was not bad, indeed. However, the piece of cheese was too small, and the corn was not salted enough.

We passed across nice hilly countryside, where we saw many rocks and caves. After pleasant walk, we came Inca Church of Sun and other Inca ruins of Q´enqo name. Finally, we arrived to Saqsayhuaman Citadel („Sexywoman“ is the other name of this locality). So, this fortification would present shell-head and the town of Cusco her body. It is obvious that you can see there well formed teeth of this animal. Nevertheless, the best sightseeing to be seen and admired on such place, - top experience of this day - it was „stone slide“. Despite the fact that this phenomenon was described in guide-book, we did not believe it, that we could found it, and that it would be something special. But, it was true! Such long stone slide had inside several cracks, and it was necessary to jump over, by means of skilful hands-attach, nevertheless, when such switch managed to be overcome, this descent was wonderful! 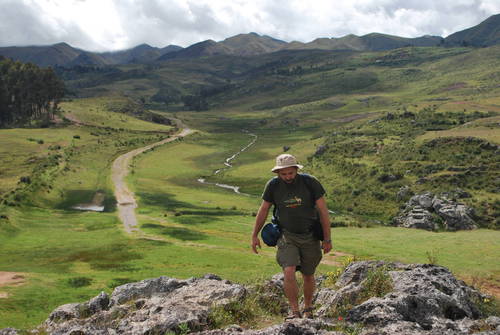 So, we passed through several times, and afterthat we continued our walk to Cusco outlook which was beautiful as well. Later, we returned, rather tired, down to the town, passing lams and Indian women, offering again some goods for us.

On Plaza de Armas (nearly all main squares in Peru have such name) we wished to have a look at the church.However, it was closed. When we wanted to turn back, I heard somebody to speak Czech. Young couple with four-year boy wished to greet us, very nice persons! They informed us that they visited Cordillera Blanca, too, but the trek was rather difficult, for them, just with so small child. They spent several days in mountains, and it was very pleasant. Now, they have the intention to stay in Cusco for several days, making some excursions to the environs, before they leave Peru to travel home. 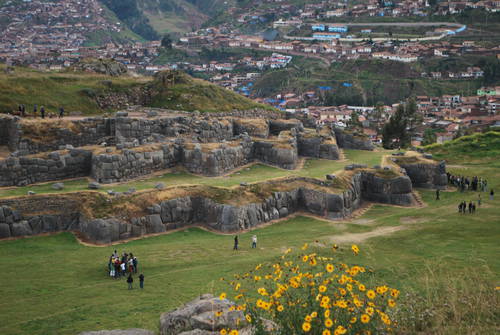 In the evening, we left Cusco as well, after confusing looking for bus stop, to Puna. This town is placed along banks of Titicaca Lake.