At first, we bought tickets to Arequipa (JULSA company, unit price Sols 15), and consequently, we were let to be transported to the hostel. However, our beaters-boy found that the hostel is full, so he let us to another place, trying to get from us Sols 20. Nevertheless, we strictly and persistently refused such disadvantageous offer, he recommended us four-bed room for originally promised unit price, and this was O.K. 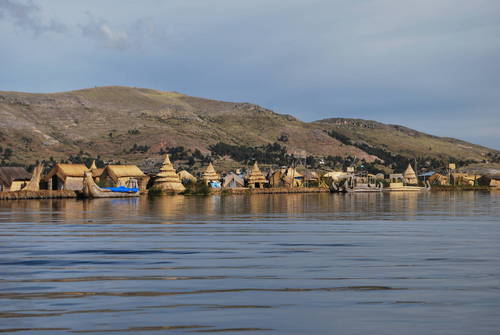 So, as soon as we settled our accommodation, we went to the lake. It was not far from the hostel, maybe from the reason that Puno is not too big town. We went round the bay, where small children boats were anchored (in a form of swan and other animals), continuing towards a pier, where real ships were settled. Anyway, when we approached the place, we were immediately surrounded with a group of beaters-boys, specialized not for accommodation but for boat excusrions. Just here, such terrible commercial atmosphere tought us fully, which accompanied us during the whole time period of our stay in Peru. We bought the tickets for Uros Islands (Sols 10 per a person). Moreover, we were forced to pay a surcharge of Sols 5 for the entry to these islands.

Anyway, we set sail soon, and this five-kilometres long route took approx. 30 minutes. When we passed among reed islands, business and commerce offers watched and caught us at each step. The islands liked us very much. It is obvious that during their building as well as their maintenance a lot of work and efforts were hidden, but, however, everything was adapted to tourists´ interests and all this was clear to be noticed.

So, we arrived to one island and got out. Immediately, a man run to us, presenting as a President of the island. When we asked him, if it could be possible to mount up reed outlok tower, he answered that, first of all, we would listen to a lecture, and afterthat we receive „free time“, when we would be allowed to mount upstairs. So, we sat down on reed bank and followed detailed lecture in English, getting into touch with the origin and way of life in reed islands. We were informed, in which way the islands were constructed, how the reeds must be added regularly. Local inhabitants are living on barter business, i.e. by means of goods exchange with overland persons (the President mentioned tourist actovities as its last item), etc. It is difficult to say, if we could believe all he said. 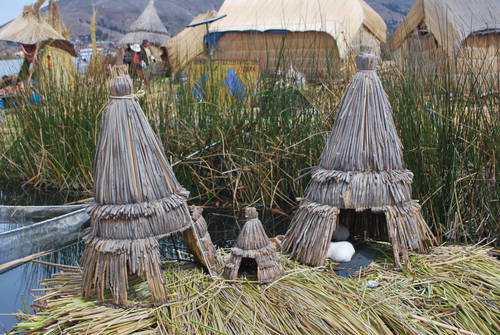 When the lecture finished we were appealed to island´s sightseeing and shopping in kiosks, but, however, only  trumperies were available there. Finally, we got a desire to taste reed (only its

white part is possible to be eaten). Anyway, we did not liked it too much. Afterthat, we were set to reed boat, but we were forced to pay another charge of Sols 8. We transferred from one island to another one. Milan tried paddling, and it proved to be rather difficult. In this island, we visited a museum of stuffed birds. Nevertheless, we were not managed to enter as it was too small and an old man required the payment for the entrance. We did not know, what to do, so, we bought very expensive beer, sat down of reed platform, waiting for ship departure. In general, I am glad that I had the opportunity to visit these islands but it was not necessary to return there once again.

When we landed Puno, we run to the hostel, as we were terribly tired, thanks to unsuccessfull night, and wished to go to bed. After refreshing sleep, we went out towards the embankment, in order to buy the tickets for tomorrow, when the excursion for Taquille Island was planned. Next morning, Pepa and Marketa joined us again. We walked together, in order to have a look at local sightseeings. However, Puno is poor on monuments. Only a cathedral, placed on Plaza de Armas and Victory Arch, dedicated to heroes for independence, are worth to be admired. 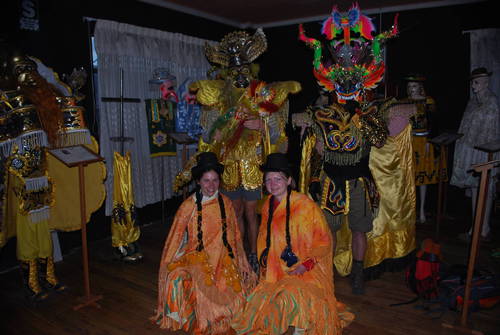 Except of this, we visited also Coca and Costumes´ Museum. This was very pleasant. At first, we saw documentary film regarding regional dances in costumes, and we could also try to dress some costumes, too. So, the girls (Zuzka and me) got Indian costume, including long pigtails. On the other hand, the boys had it rather more coloured. Their costumes presented some devils or something like that and were really richly made that it was impossible to recognize, who could be hidden behind a mask. In a section dedicated to coca, we could read a lot of information regarding such plant and its action to human organism. We knew that coca has 14 alcaloids, and cocain forms one of them. According to museum´s information, coca has very positive effects for nervous system, heart, stomach, muscles, respiration and even sexual life, for everything, indeed.