The fee for transport cost Sols 35 (the amount of Sols 10 made the entrance to the island). The ship was soon full of tourists. A man came to front part of the board and started to play a flute, and afterthat some other musical instrument. When he finished playing, he asked the passengers for some money (reward) for his artistic performance. The vessel set off and the captain spoke to microphone, presenting some information to us. However, his news was not too positive and was rather confused. He told us that the ship would be destined for Uros and Amantami Islands. We had no intention to visit Uros Island, so, we were very disappointed. Nevertheless, we were informed later that our group would change there to the other vessel, directing to Taquille Island. 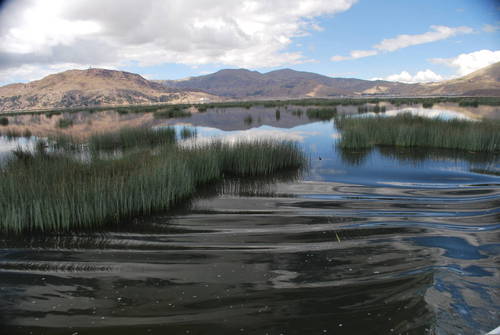 So, it happened like this. Pepa and Marketa declared that Uros sightseeing would be sufficient for them. On the second ship, we were placed into seats, but we were curious enough, if we could mount upstairs on roof deck, where the banks and railings were installed. However, we did not got the permission from the very beginning. I asked for the reason, and got a reply that it is not possible to enter upstairs, owing to lake police. Anyway, as soon as the ship sailed from the bay to open lake, we received a permission to mount upstairs. And really, when we left the bay (where Uros Islands and Puno port are situated), we were allowed to mount via ladder upstairs, and we stayed there till the end of the navigation. We received coca-tea and detailed private lecture regarding the target of our excursion. The guide was a pleasant man, able to speak several foreign languages. So, he informed us about islands´ position and about its inhabitants. Anyway, just the information regarding local inhabitants seemed to us a little sceptical. When we landed, we saw that local people present their habits mainly for tourists. And this was the main impression for us. 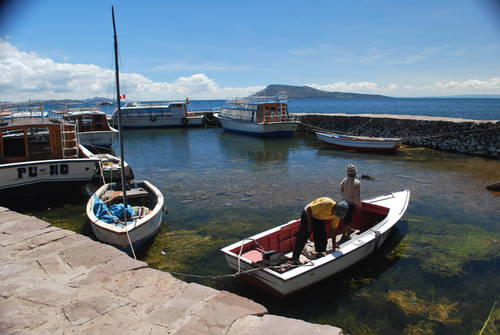 The island looked nice, similarly as in Mediterranean. When we landed, we had free time for one hour. The lunch would be served in a restaurant on the square, and afterthat we would move to the other port and navigate back. So, the instructions were like these. However, we rejected such way of organization. We asked the guide, at what time the ship would leave, and we did not wished any lunch and we  should be able to reach the port ourselves. And the guide had no objections!

So, we came to standard square and dispensed, not only with the other passengers from the ship, but also among ourselves. Whereas Marketa (she was rather ill), Vojta and Zuzka walked directly to the lake to have a rest there (later, Zuzka made „terrain reconnoitring“ and lost her way a little), me with Milan decided to accompany Pepa during his adventurous excursion to the opposite part of the island, where so called „geocaching point“ would be allegedly hidden. Pepa is an enthusiastic participant of such play, and just for a fact that these geocaching points in Peru are rarther rare, he desired to find and get at least one point. This geocaching point would be hidden on marvellous sandy beach.

So, we left the square and came soon to more pleasant area, where local people in their typical costumes  did not made their performance and even the  tourists were missing. We were conscious of a fact that we did not have lack of time and we must be in a hurry in order to catch the departure of the ship. So, we made no stops, even for making photos. Pepa navigated us by means of GPS and we reached finally the beach. To tell the truth, the beach was very picturesque. Pepa begun to look for his treasure, whereas me and Milan had a bath, and the water had relatively pleasant temperature. After five minutes, we heard Pepa that he would give up to look for such geocaching point and would join us for bathing. However, the time became inexorable and the reserve for bathing took ten minutes only.

We were forced to change our clothes (at the assistance of local boys) and set forward return way. So, we run ahead as a wind along beach path and across terrace fields. Frankly speaking, the run was rather difficult, at such speed and heat. Anyway, we did it and came to the port sooner that most of some passengers. The ship left the port later, and had to return, owing to two late-comers. 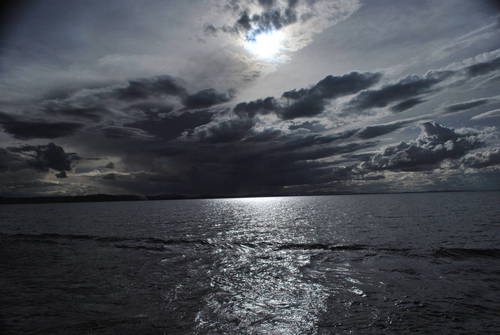 When we arrived to Puna, we separated from each other - to the market, internet coffee or to the hostel. Just in Cusco, we were informed about the explosion of Iceland´ s volcano. As a consequence of such appearance, most of European airports were forced to close their runways, owing to volcano ash in the air. Now, a couple of days before our departure, the airports were still closed for traffic. Only Madrid Airport (it was prime interest for Zuzka) remained open, but this fact did not meant that the wind could not shift the ash in eastern direction and the airports would be closed just in a day of our departure. So, this information became alarmed for us for the time being. Originally, we were of the opinion that our holidays would be prolonged and we could be excused, but, in general, such fact would not help us a lot. Provided the European airports would be closed in a day of our flight, we would be forced to wait for better situation at Lima Airport. And so, we hoped that the situation would finally change and be improved. 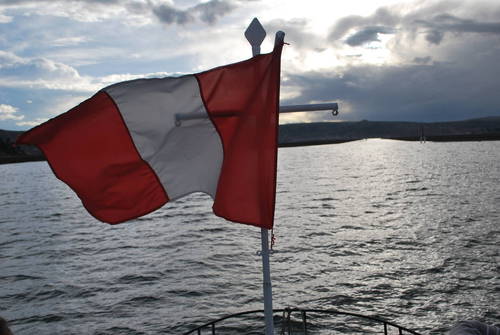