Along the way, we had the possibility to have a look at famous Misti Volcano, ostentatively erecting above Arequipa. According to the information, we had available before our departure to Peru, we knew that the way upstairs would not bring any pleasure, as only gravel and stones are to be found there. So, we did not regretted that such excursion will not be made.

When we arrived to Arequipa, we decided to exclude planned sigtseeing (from lack of time) and so, we drove directly to Colca-river canyon. The town of Chivay was starting point of such destination. So, we went by bus with an idea that we spent a night in Chivay starting our trek to canyon next morning. The ticket cost Sols 12. Just during the drive, very pleasant Peruan woman started to have a chat with us. She offered us the accommodation in Chivay (Sols 10 per one person and night). We were very thankful for such cheap accommodation in Peru (not taking into consideration sleeping in the tent). The hostel names „Sumac Wasi“ and a service is really pleasant, so, we wish to recommend it to you! 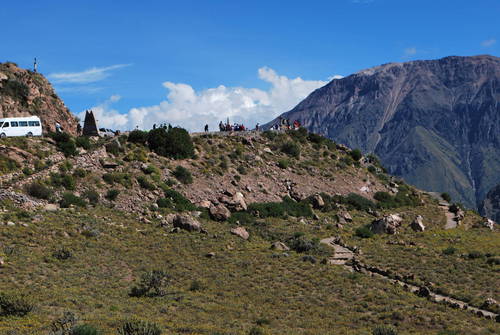 In the morning, we had to leave by the earliest track, in order to catch the best tourist attraction,

i.e. Colca-river canyon. These are, first of all, morning flights of condors above observers´ heads. Birds´ „time-table“ lasts since eight till ten o´clock approx. This fact could be probably connected with morning ascenting streams, where the condors enter, which help them to fly into highest altitudes.

So, we got up at six a.m. and went to bus station, taking with small and light rucksacks only. Here, we obtained (after 30 minutes of negotiation) a ticket to canyon at the cost of Sols 35. If we did not buy this ticket, we did not got the allowance to travel with such bus.

After two hours´of drive, we arrived to the place of destination, at half

past nine a.m. The weather was sunnny and pleasant. Cruz del Condor, where we got out, was full of people, as expected. So, we sat down on the outlook, expecting condors. However, no birds flew over for long time, but it was no trouble for us. After ten o´clock, the place begun to be evacuated, and soon, we and several other persons remained there. Even Indian women, selling there their goods, waiting for collectivo. And suddenly, we saw a dot on the horizon, and this point started to be approached there. The condors fly, finally! The birds flew over our heads and shortly afterthat, they disappeared  quickly among high cirrus uncinus clouds, forming really marvellous composition. 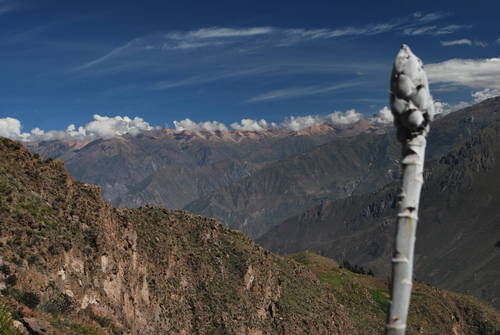 Another three condors flew. In order to see better, we transferred to the view (outlook) which was better situated, as our original post. Now, the outlook was nearly deserted, and we and two Dutchmen had the chance to follow such scenery. We had a friendly chat with them, and started to walk along canyon in direction to the village of Pinchollo and back to Chivay. We had the intention to walk ahead till we got tired and make a camping on such suitable place. 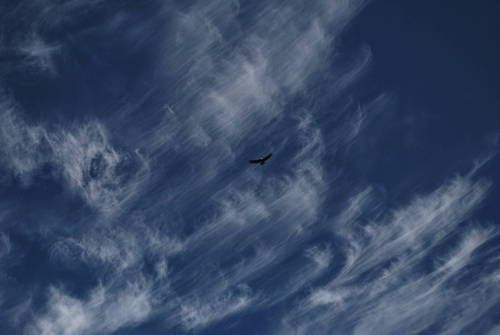 The trek was very pleasant. We could enjoy new views in any moment, so we stopped there, being delighted in such outlooks. The weather was nice, only strong wind blew from time to time. After some minutes, we turned aside the canyon, walking throughout very dry countryside, strewn with a lot of gigantic cactuses. We caught a glimpse of a donkey, but sometimes we were painfully stuck by cactus thorns into our feet, and its extraction proved to be rather

difficult. I was very lucky that we marched again, and the trek seemed to us as in Wild West.

In the afternoon, we tried to look for some place for overnight. And really, we found one! The area had minimum of cactus plants, moreover, overhanging stones, where even the cooking was possible to be made, and marvellous view towards Hualca Hualca Mountain.

In the morning, we went to the road, situated close to our stand. We marched ahead towards Chivay. Some vehicles passed but there were mostly travel agencies minibuses, however, in opposite direction. At such time period, all vehicles went to condors´ outlook. 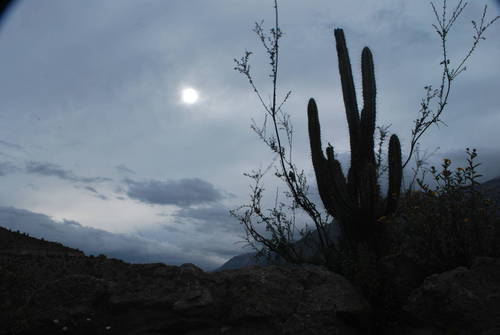 Anyway, the walk along the road was rather tedious and spiteful, moreover, each vehicle which missed us, covered us with dusty clouds. Finally, in the course of ten minutes, we came to check point, where we took up, after a while, bus in direction to Chivay. Neverheless, we had time enough, so, we looked through this nice town, and found in internet coffee that the flying traffic to Europe was functioning! Afterthat, we packed our belongings and left for Arequipa. 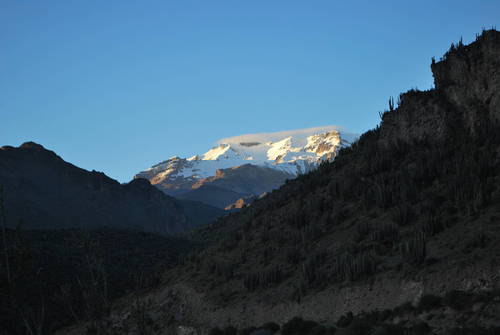 In Arequipa, we had free time for having a rest. We went by taxi into city centre, where we made a short walk. It is pleasant town, made mostly from volcanic stones (the name of this stone was impossible to translate from English), so I have forgotten it. Nice cathedral and the palms everywhere. We admired the interior of one nice church and wished to visit St. Catherine Monastery, recommeded by guide-book. Unfortunately, the abbey was closed, but, despite of this, we had lack of time and money, in order to see it. The entry ticket cost Sols 30 per person. So, we spent most of time in souvenir shop and in the coffee. And finally, the term of our departure came. We returned to bus station, and left, by courtesy of Flores company, in the course of the night, to Pisco. 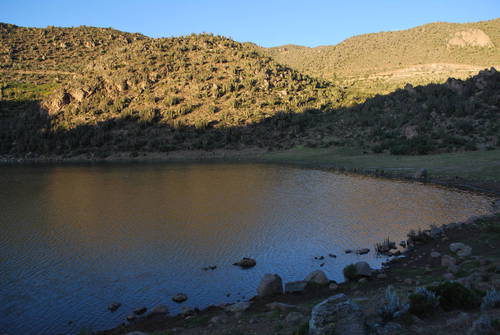