en.infoglobe.cz » Peru: Trujillo the City of Eternal Spring and Archeological Sites Around

Off Cajamarca landscape changes. We see only sand. We are quite surprised by the deserts around for we didn't expect such dry desert area to even be here. 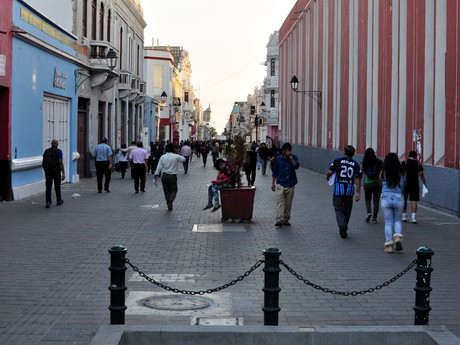 Trujillo combines a colonial city and remains of ancient cultures. The evidence suggests that the city was founded over 10 thousand years ago. Cupisnique, Salinar or Viru civilizations laid foundations for the development of culture along the norhern coastline. Mochica culture was the ruling culture here between the 1st and the 7th century. And it was this culture which created the first organized state in Peru. This area was the cradle of Chimu culture in the 12th century. They built the city of Chan Chan. Then they expanded further along the coastline. After the Spanish came, the cities of Trujillo was founded. Martin de Estete designed the center so its clocs resemble a chessboard. The main square of Plaza de Armas was designed in the shape of a square as well as the city center. The main sight in the city center is the cathedral built in 1666. Inside, there are rare works of art. Except some more churches and some beautiful streets, Trujillo is rather a large and noisy city. Peruvanian drivers are probably the single worst drivers we have ever seen. And they are incredibly noisy too because they honk constantly. When we are about to fall asleep in our hotel, what we always can hear is the annying honking. 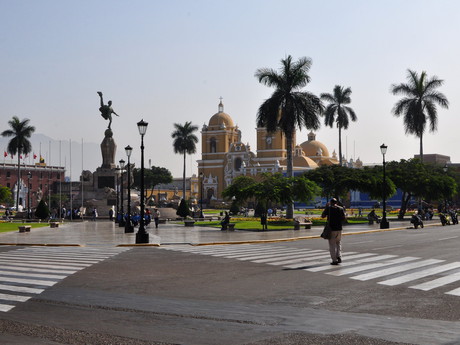 Huanchaco, a village about 13 kilometers away, is also worth your time. The legend says that Prince Tacaynamo and his entourage disembarked here and established the first dynasty of the Chimu. Since the pre-Colombian era, fishermen have been using traditional rafts "caballitos de totora". However, today the beaches are rather popular for surfers. To us, water seems too cold. 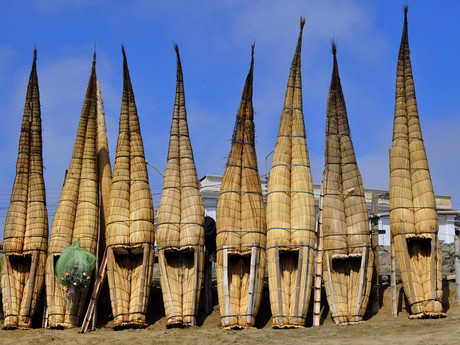 Now we set off for the main sight in the are – ancient ruins. We take a ride to the road. Then we go on foot. On our way, we meet a nude dog, they live around here. We notice ruins of houses while thinking how extensive the settlement of this area must have been and how much still rests undiscovered. Chan Chan is the largest pre-Colombian cities in America. The city was built around the year 1300. Also, it is the largest city ever built from adobes in the world. It was the capital of Chimu empire. During its peak, allegedly 60 thousand people lived there in all sorts of buildings. Squares, houses, streets, pyramide temples, and other structures decorated with geometrical patterns, szoomorphological and mythological creatures. The walk in this labyrinth of massive walls is sure worth it. Apart from Chan Chan, a combined ticket allows you to enter two temples in the area – Huaca Esmeralda and Huaca Arco Iris. 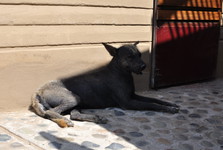 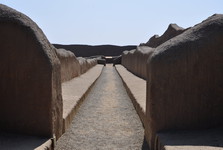 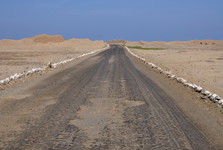 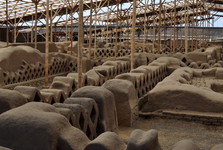 Las Huacas del Sol y de la Luna were other ruins we couldn't miss. These are temples of Moche culture. Their age is estimated to be over 700 years older than Chan Chan. Huaca del Sol was a political and administrative center. Huaca de la Luna was a ceremonial venue. These structures only confirm the politicla, religious, economic and social importance of the Moche culture. Huaca del Sol consists of 140 milion adobes. Today, it rather looks like a pile of sand. However, the structure was closed to the visitors for archeological excavations took place there. Huaca de la Luna resembles a clay hill. There you must hire a guide so you wouldn't damage the sight. The walls are  covered in colorful crestings. These are magnificiently well preserved. Archeologists have still been discovering new layers. 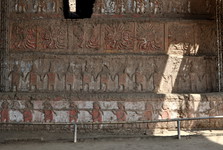 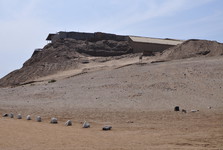 The Moche and the Chimu cultures left these amazing structures in the Trujilla region. However, every year new discovery is being made as the excavations are still in progress.