en.infoglobe.cz » Poland, Wieliczka Salt Mine III – The Other Half of Tourist Trail in the Underground

Despite the charming and monumental chapel of St. Kinga, we reached the second lower floor of Adam Mickiewicz, located at a depth of 110 meters. The Erasmus Baracza chamber brings us to the another underground world dominated by water. It was named after the director of the mines from 1917 - 1918, who belonged among the famous collectors of art. The salt pillar, which miners have left behind in the mining area, along with a layer of salt, in order to avoid the burden of space. The salt was mined between the years 1846 – 1866 in this part, which is dominated by the beautiful 9-meter deep pond filled with brine, was mined between 1846 and 1866. 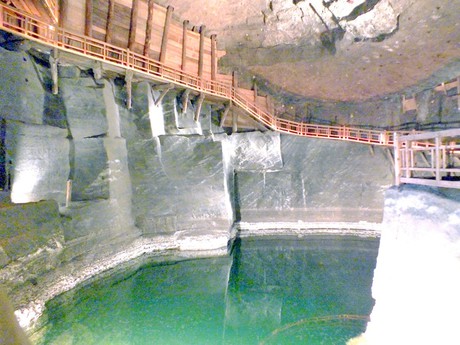 Up to 35 meters tall space forms a chamber with impressive white wooden struts provided by the Michalowice chamber. Between the white pillars is a staircase and even a stage for the mining orchestra that is part of this mine. In a similar way, another chamber of Drozdowice is formed, where until now you can see the traces of manual mashing of salt layers. I can not remember one of the many memorial plaques in the mine. It recalls the 500th anniversary of the renewal of the Jagiellonian University in Krakow, with which the mine is connected. It is the revenue from the salt mining, which miners have been struggling hard for their lives every day, to serve the monarchs for rewards for the professors of the designated schools. 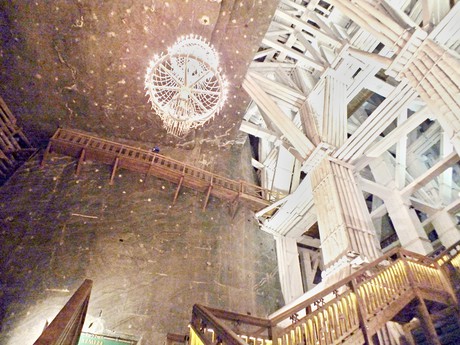 The Drozdowice Chamber is also a place where occasional exhibitions, concerts and banquets are held. The Secondary Chamber of Drozdowice I serves for conferences and training.
Another important personality in the salt underground monument is the German poet Johann Wolfgang Goethe. He accompanied the Saxon-Weimar prince Karel Augusto in 1790 during a visit to the mine. From the monument, we pass into the chambers of the 20th century chamber, bearing the name Weimar. It consists of a green pond of brine and we proceed further along a wooden sightseeing gallery located on the sides of the chamber. 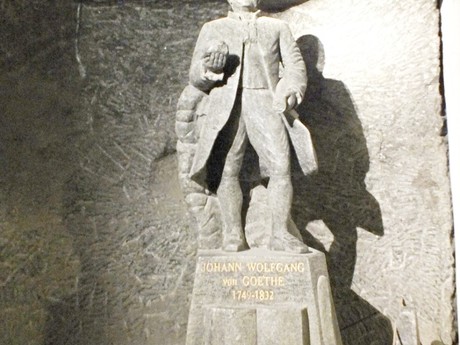 Salt mine in 1919 was also visited by the Polish revolutionary, politician and marshal, the founder of the Polish army and the restoration of free Poland, the head of the Polish state, Józef Piłsudski. Not only does it have a monument, but also the following chamber. We descend to Kazanow on the mid-level to a depth of up to 130 m. Here is also the green color of brine in a pond, where the statue of St. John of Nepomuk, protector of drowning. The location of this statue is undoubtedly related to the tunnel, which can be seen here. It has a length of 10 m and connects with the second chamber. In the 19th century, the space was incorporated into the tourist route, but the visitors were transported by boat tunnel under the sound of the mining orchestra and the lighting effects of the fireworks. It was these tourists who had to protect the saint. 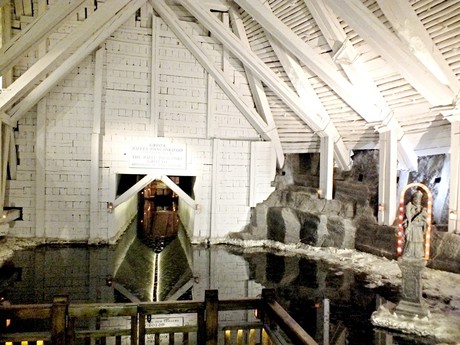 Music still echoes in the mine today, and it can not be other music than the compositions of a prominent Polish composer who has visited a mine with his friends. It was Fryderyk Chopin, whose signature they kept in a guestbook dated July 24, 1829.

Rails and electric locomotives, which besides the salt transported, also bring us to the bluest of the history of salt mining in Wieliczka. The modernization of salt mines began in the 1970s, when mechanical mining with the use of gunpowder took place, and this was also related to the change in salt transport to the surface. These exhibits were moved to the mine from the fifth floor, which is not accessible to the public. 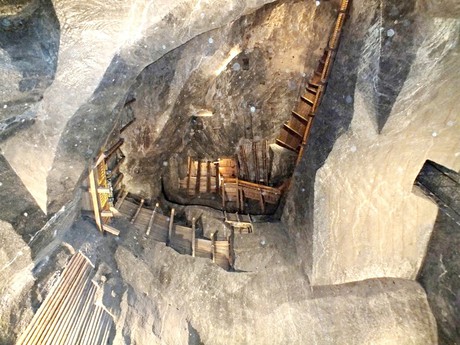 According to a prominent Polish geologist Stanislav Staszic, who visited the mine in 1790, it is named the highest chamber on the tourist route by the mine. Initially, it measured 50 meters, but due to the lowering of the lower part it now reaches a height of 36 meters. Salt here was mined from 1871 to the First World War. This part also relates to a different history, such as salt mining or tourism. During the Second World War, the Nazis created an underground armory in which Poles of Jewish origin were working.

A panoramic elevator allows you to exit from a depth of 125 m on the terrace at a depth of 100 m. Here our guided tour ended and we only waited for a walk through the corridors towards the surface. During it, the Wieliczka Underground ruler appeared to us in a form of a treasurer carved into the salt in one of the side alcoves. Miners regarded this figure as a good spirit warning of the dangers that work underground brings with it. 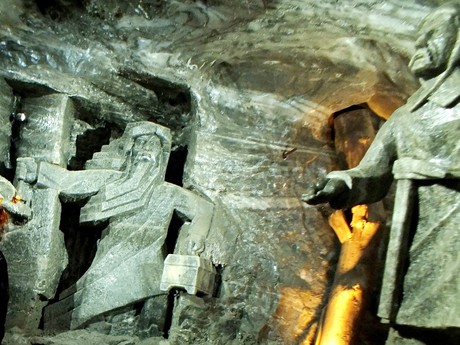 On our way I did not mention beautiful chapels, which are an unforgettable part of the tourist route. However, more attention is paid to them during the thematic pilgrimage journey underground, so I will return to them in the next post. He will breathe through the spiritual wieliczkého underground.