en.infoglobe.cz » Poland, Wieliczka Salt Mine IV – Chapels Below the Ground

Mine works was and still is very dangerous. Miners descending into the depths of the earth never know if they will see the sun and their families, their lives are at risk every minute of work in the mine. Therefore, they have their holy patrons to whom they pray. A nice habit was the construction of various chapels and altars. Not only on the ground but also in the mines. In the Wieliczka Salt Mine, we can admire several such chapels where miners went to Mass every day. 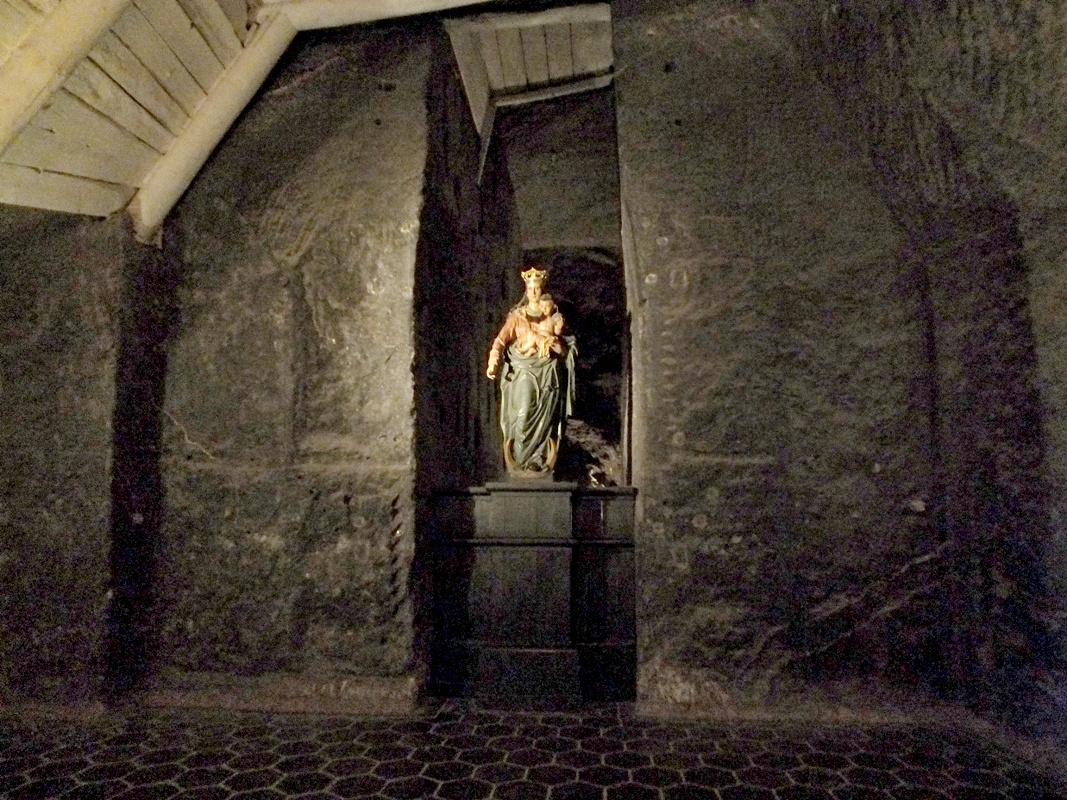 Today you can choose a pilgrimage from the several tours including the Zdar Buh route of pilgrimage! It is designed for ordered groups and takes about 2.5 hours. It copies the tourist circuit enriched with the religious aspects of the mine. In addition to the guide, a priest, who can serve at the end of the visit in the underground chapel, accompanies the guide. 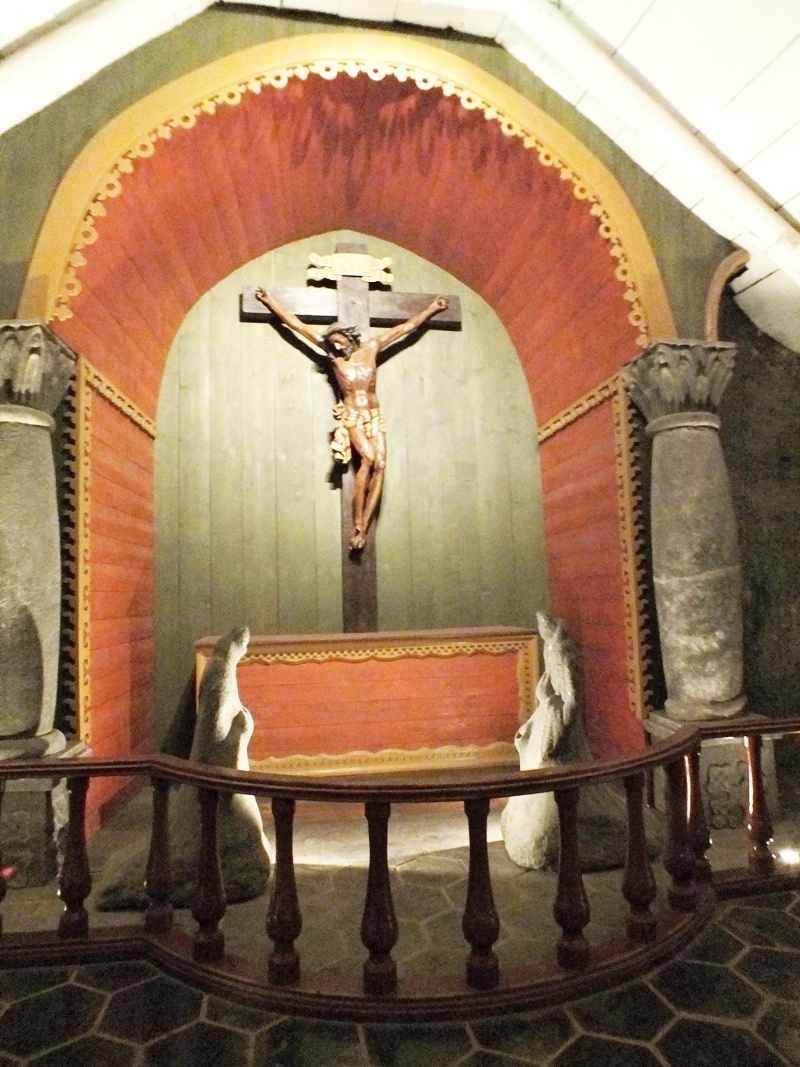 The first chapel on the way through the underground corridors of the salt mine is dedicated to St Anthony of Padua, who is also considered the patron saint of miners. The chapel of St Anthony (1690–1710) is the oldest preserved underground shrine and the first Mass was held here in 1698. On the main altar, there is a statue of the crucified Christ, the Madonna with the Child and St Anthony. The chapel's niches are st. Stanislav of Szczepanów, who was a bishop in Krakow, is not only the patron of Krakow but also of Poland. The second statue represents another patron of miners, Pope St. Klementa. Other scenes or side altars are difficult to identify due to the gradual dissolution of the salt. The hall of the chapel, which was the gathering place of the believers, is decorated with statues of St Francis, St Dominic, St Paul and St Peter. All works of art are made of salt gray shades. Salt gradually melts and sacral gems lose their details and original shapes, and so despite the conservators' efforts, this indescribable beauty is slowly disappearing. 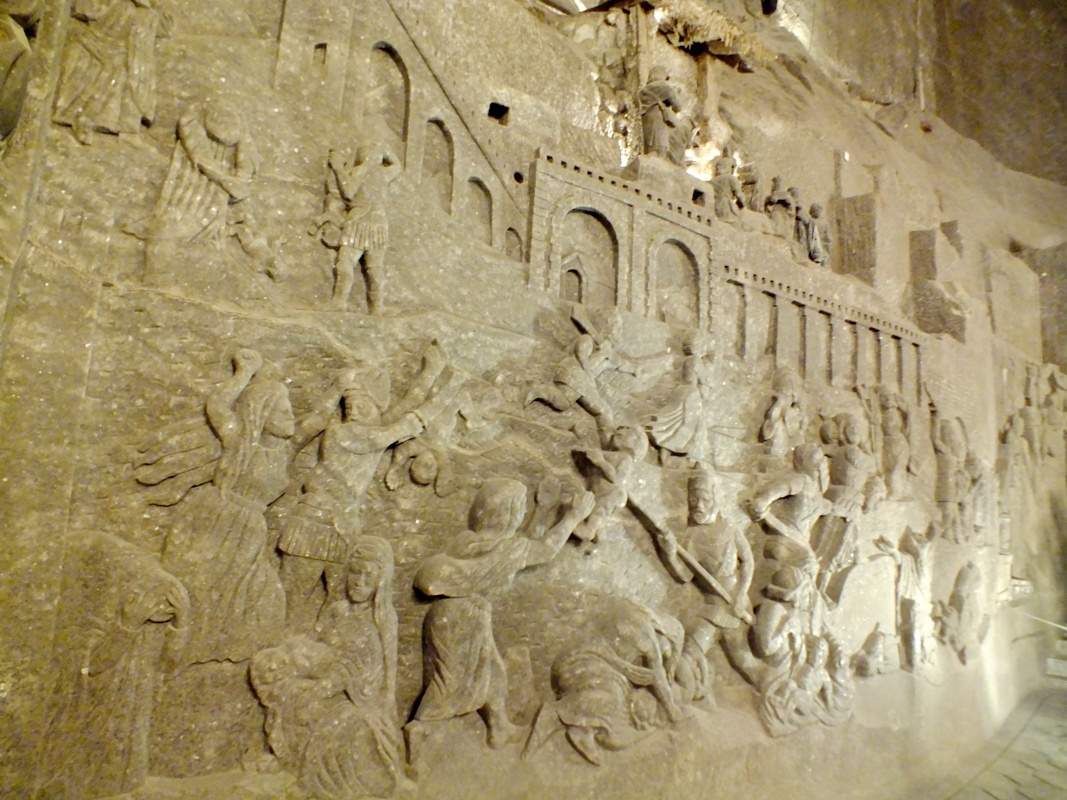 Chapel of St Cross is the second of the chapels on the tour route. It was opened to the public in the 19th century and, unlike the previous one, salt is already combined with wooden elements. The wooden altar is placed under the arch, supported by salt columns and reinforced wood. It is dominated by a wooden statue of the crucified Christ. Two heavily identifiable figures of monks from salt kneeling in front of the altar table - Menzies. Opposite is the polychrome wooden statue of the Virgin Mary Victorious from the 17th century. The chandelier created by a combination of wood and salt crystals brings light to this chapel.

The highlight of the pilgrimage is the most beautiful and spectacular chapel hidden under the ground. Chapel of St Kinga was created in space after the huge green salt block was mined in 1896. Its dimensions are respectable and even smaller. The long one is 54 m wide, up to 18 m wide and reaches up to 12 m in height. 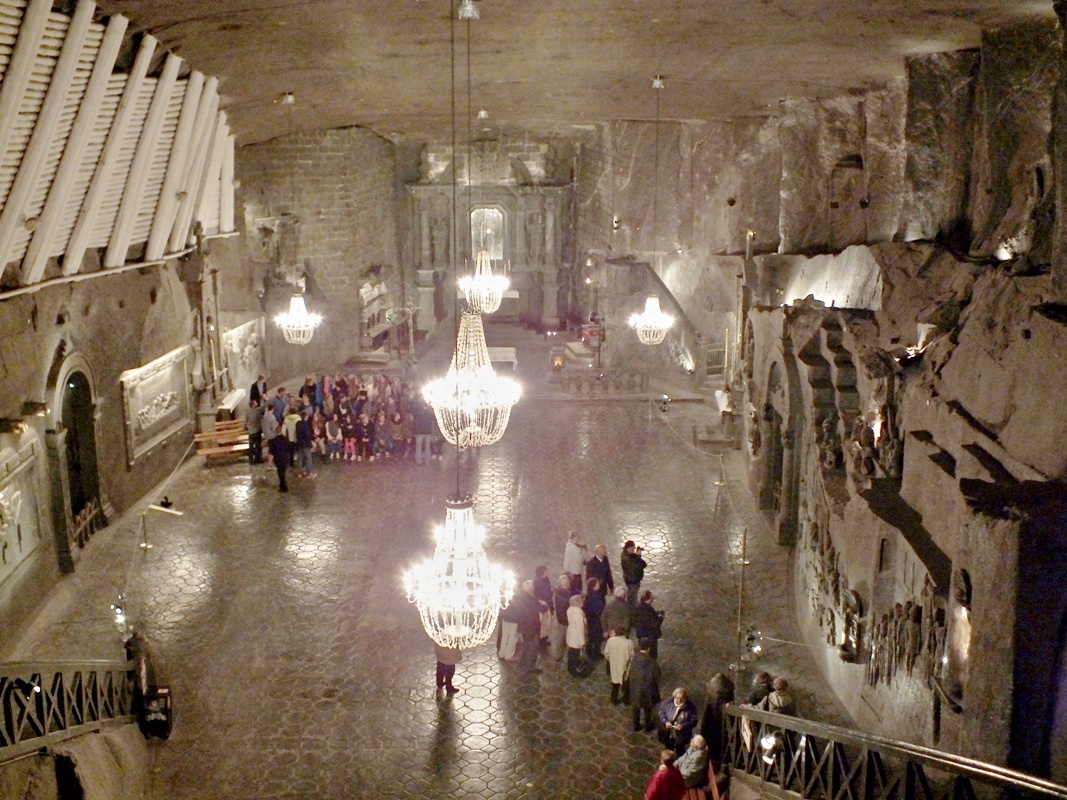 The miners considered St Kinga (also called Kunigunda) to be their distinctive patron, who miraculously helped them work in the mine. But she was also worshiped by the simple people who, for her merits during her life, appropriated her as the mother of the poor and the troubled.
Miners sculptors participated in the decoration of the chapel, of which I will mention only a fraction. The leader was Jozef Markowski, who also created the main altar and pulpit. Originally, an oil painting depicting the legend of the discovery of salt in Wieliczka was placed on the altar, but in 1914 the painting was replaced by the salt sculpture of Princess Kinga. The wall behind it is made of rock salt - halite crystals. The salt sculptures of the patron saint of the carpenters of st. Joseph and the patron saint of the miners and the Wieliczka rectory of st. Klementa. On the south wall there is the Chapel of the Resurrection and the side altar of the Heart of Mary, opposite to which is the altar of the Heart of Jesus Christ.

His younger brother Tomas Markowski (1920–1927) continued to decorate the chapel. His most important reliefs are Herod's judgment and Murder of the Innocents.

The decoration was completed by Antoni Wyrodek (1927–1963). As self-taught he created the Escape to Egypt reliefs, the 12-year-old Jesus preaching in the temple, the Journey to Bethlehem and the Wedding in the Galilee Cana. As a professional artist, he continued with the works of The Faithless Thomas and The Last Supper, inspired by Leonardo da Vinci's mural. 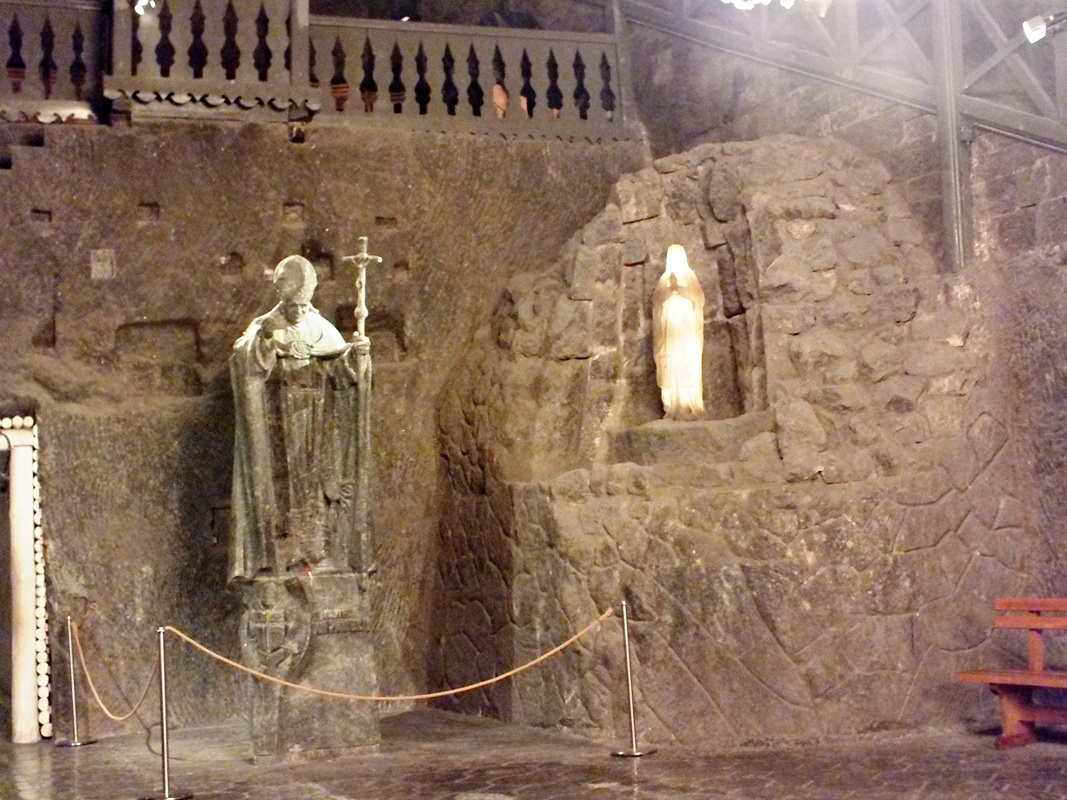 Monument to Pope John Paul II (Stanislav Aniol, 1999) was congratulated for the canonization of the patron of these mines during his visit to Poland (1999). The altar table is the place where the relics of st. Kingy, which was transported in 1994 from the monastery in Old Sacz. Next to it is a papal cross of various types of salt, which symbolizes all the Polish salt mines (Wieliczka, Bochina, Klodawa and Sieroszowice). John Paul II visited the mine personally, but not as a pope, but during his student days or bishop's work in Krakow.

The impressive chandeliers decorated with crystal crystals create the impression of the monumentality of the temple. The work on the decoration is still in progress and their goal is to make the whole decoration of the chapel out of salt. The chapel, which seats up to 500 persons, is also a venue for concerts and religious activities. Masses are still taking place here, especially on the feast day of the patron saint of the miners - St Kinga (Jul 24) and St. Barbora (Dec 12). 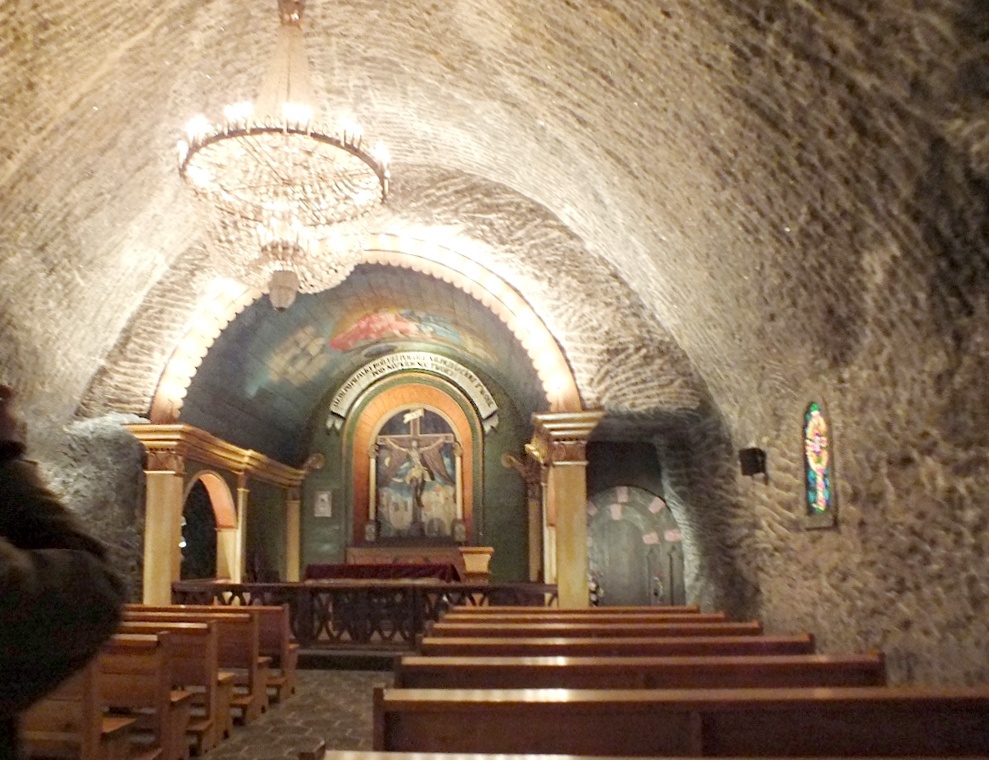 Part of the pilgrimage route is also the passage called Golgotha of the Wieliczka Miners. It was created in 2010 and consists of wooden reliefs representing 14 Stations of the Stations of the Cross. Located on the deepest third floor, it is part of a hiking trail. At a depth of 135 m there is Chapel of St John. She was brought here from the first floor, where she was threatened by environmental damage. It consists of a semicircular wooden vault with the painting of the Holy Trinity, which is embedded in the salt wall. On the altar is a crucifix in the background with a painting depicting Jerusalem. Before the Chapel of St Kinga was the most important shrine in the mine.