en.infoglobe.cz » Portugal, Fátima: Suffer A Miracle Will Come To You - VIDEO

At first sight Fátima is not special. It works same as every small town that by its abilities keep satisfied the needs of its people. To the life of local which we could count something around 10 thousand daily entering thousands and thousands of pilgrims and tourists. Those in their city only one thing entice - strength and power of the Fátima miracle, that there should happened relatively recently - namely in 1917, in the last phase of the war, which later came to be called First World.

Then the trio children (Francisco, Jasinta and Lucia) appeared and even spoke to them Virgin Mary to predicted the end of the war and she promised help those who turn to her in prayers, but also close death of two of the three children. She had shown up several times, always on the thirteenth day of the month - in the period from May to October. In one revelation was the Virgin Mary told the children to bring all who doubt, so the fields around the town gathered around 70 thousand people. That day it was raining, but then, according to many testimonies sky brightened, the valley filled with colours of the rainbow, and the sun began to scamper here and there. While on the ground were also photographers, on any of the images, nothing resembling a miracle, not visible. Despite of Vatican finally, 1930, revelation proclaimed as miracle. Jasinta and Francisco died shortly after the revelations. The last of the three children Lucia, dedicated her life to God. She died in 2005. 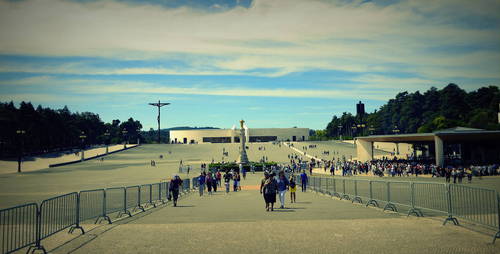 All the current events around the story start at square area in front of the entrance to the Cova da Iria, a place which at the time consisted of revelation natural amphitheatre. Wax legs, arms, head or whole figures, candle without a wick greater than buyers, images, pendants - with all of this stuff in Fatima people trade. In front of each stall crowd many people who buy this or that, for the uninitiated observer bizarre souvenirs, one thing connects them - the desire for a miracle.

Everyone then slowly continue on to the already mentioned Cova da Iria, an area about as big as Prague's Strahov "Spartakiádní stadium", where in place of revelation stands a small chapel. None of people smile, all of them have a very serious, dedicated expression. They came to God ask  him for something extra so now intertwine among themselves and all of their energy trying to concentrate moments they spend at Fatima - a place of miracles. Judging by the tent city, which lies just behind the Basilica in the shade of pines and olive trees, it is a whole days.

"I am the light of the world, he who follows me will not walk in darkness, but he will have the light of life." 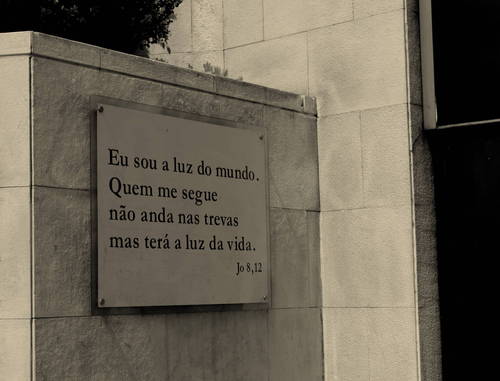 Huge "cauldron" where everything is burned what people bought in kiosks, for many of the pilgrims one of the first stops. Before people throw their artifacts into the fire, they must stand the long queue. When then the fire so close that it burns to the face and stings the eyes, can "give", and even choose their time to prayer, so long to get to the other.

Everything for a miracle, and blood on the sidewalk

In language reminiscent of mixed Spanish and Russian from the vast expanse of loudspeakers echo the words of the representatives of Roman Catholic Church. Hundreds of people listen to the Mass and under the shelter or open-air pray together, silently or in their mind, head down to the ground. 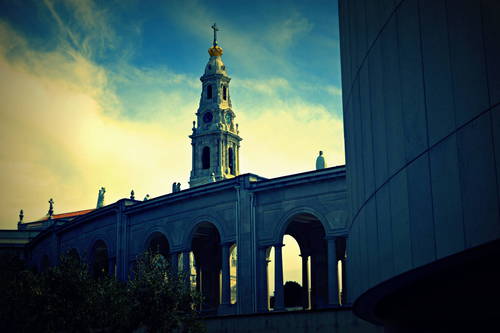 To the prayers are inclined especially those who are moving on their knees after hundreds of meters long, glossy smooth pavement that stretches means open space. The pain you are undergoing during this pilgrimage, usually equal pain due to undergo this ordeal. Usually it is health, which for them or their loved these people ask God. Therefore, those limbs or other body parts of wax. The more God will know about their suffering, the greater the probability that they will also help. The rather that in the place of miracles - in Fátima town. 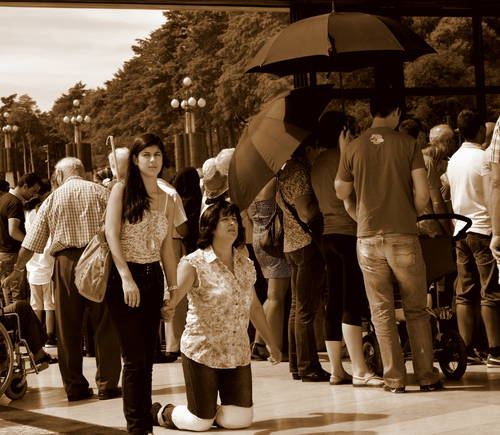 A woman with her little baby in her arms is crawling on her knees and members of her family hold shoulder as a support. Her knees are covered with home-sewn pads, which are but against a weak hardness of stone libation. The goal of the Basilica is a giant in the neoclassical style, had made a snail's pace.

On the same sidewalk on which ends you can often see blood, but in the opposite direction, another woman is kneeling on her knees. Also, she has a child in her arms, but no one accompanied her. She was in the basilica, where Francisco, Jasinta and Lucia are buried. She decided to do more than the others for miracle - so she slithers on knees back and forth. The inscription placed on the bottom step wide white staircase leading to the basilica, Quereis oferecer - wasps and Deus? (You want to surrender to God?), she slowly lost behind. But faith is growing. 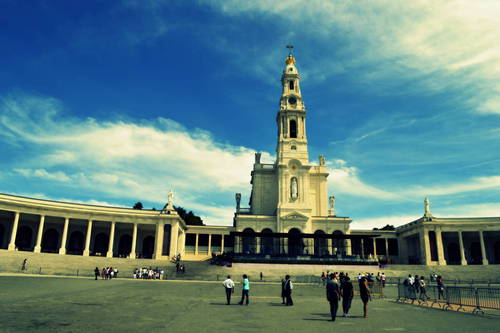