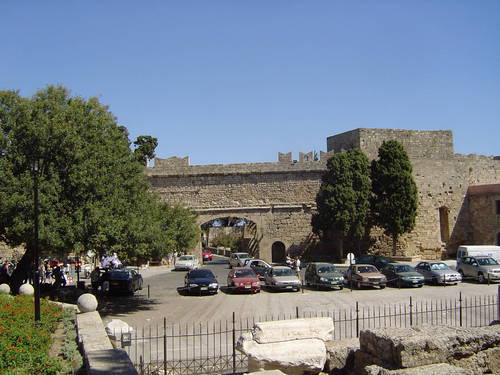 In the time of establishment, city was projected on the rectangular system of streets and lied from the Acropolis area on the west to the east coast. Around the city lead 4 km long walls (interior and exterior) with towers, bastions and moats. Just behind these walls is just the right historical centre with narrow cobbled streets.

Capital consists of two parts: the Old and New Town. Just outside the walls, between the ports of Mandrake and Emborio, is centre of both cities, where tourists find necessary maps and information centres. 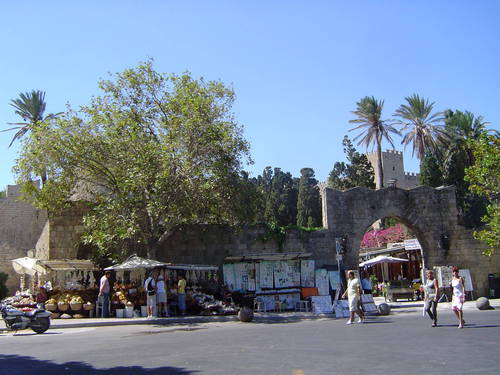 The town was founded and built by the Knights of St. John (Johanits, the Templars, the Knights of Malta). Labyrinth of alleys and quiet nooks is divided into two parts - Knights Quarter and Bourg. To the Knights part entrance by ​​the gate of Liberty across the ditch between the inner walls. Today is densely planted with pink flowering shrubs, in times of war has always resisted the attack of enemies, even though water was never full. Just beyond the gate can be seen the remains of the ancient temple of Aphrodite (3rd cent. BC). The square in the centre of town stands a marble fountain - originally a Byzantine baptistery, which was found in the south of the island. On the way we meet on the former knight's hospital, which is part of the Museum of Decorative Arts, and close to Byzantine and Archaeological Museum. Church "Madonna of strength" knights originally served as the cathedral, later, under Turkish rule, was converted into a mosque, where some of the executions of Christians - hence the "bloody mosque". The renovated buildings found space museums, banks and major institutions. The main axis of the homonymous district Knightly is paved and one of the most famous medieval streets – Knight´s avenue.

The main building of the Old Town is a Palace of the Grand Masters of 14 century. It is said that the palace - which is below the ruins that were left for him, the ancient temple hidden treasure. I. St. War completely ruined medieval castle, the only decoration are preserved mosaic decoration of halls, such as the head of Medusa, the nine Muses, dolphins, etc. During the reign of Italians entire palace lavishly restored and added the majestic medieval castle, everything down to the last detail, because the building should serve to the Italian king. In the courtyard is a bronze wolf - the mother of Romulus and Remus. Originally protect the entrance to the older ports - Mandrake. In two parts of the palace are expositions of ancient Rhodes with rich collections of all kinds. At the end of the street is frequented by Socrates Suleymanov mosque with brick red roof. Right next to the towering clock tower (open view), which under Turkish domination announce the Greeks, the time to leave town. 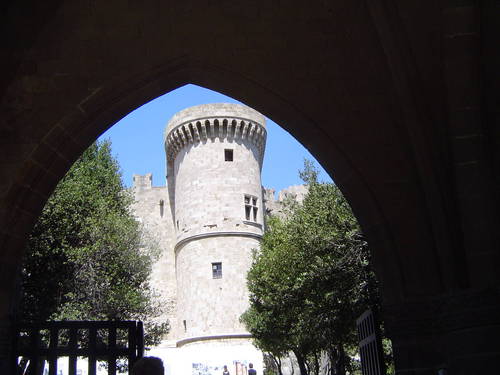 At each step when learn something about local history, you discover the remains of the old masters. Their arms left carved in stone on many buildings, gates and castle fortifications. In the maze of narrow and winding streets, cobbled pebbles, it is really very difficult to know where you are. Shops, taverns and small cafes on the ground floor stone houses of different historical periods take you centuries back.