Published: 22.4.2008
Let´s imagine warm summer evening. Centenary and millenial beauty of basilicas, fountains and palaces of "Eternal Town" dresses, after rush day, its rosa robe, the last sun-rays rebound from marble buildings, which gave to this town its favour of all visitors around the world.

However, this favour of tourists takes away the poetry of this jewel of European culture. Rome is, at the same time, and justly, named as a town of chaos. The streets become - during a day - a scene of cars war, where groups of pedestrians enter from all parts. It looks like rather comical from first point of view, but from the other part, this reality is quite depressive. But, frankly speaking, what ese could be expected of country like Italy and its capital, where supernatural beauty and elegance is joined with dirt, noise and enormous quantity of wandering cats. It is impossible to walk - within couple of hours - to

travel through three thousand years old European cultural tradition, so to solve some town´s traffic problems is taken more as triviality. Apart of this, we recommend you to leave your car at home, and travel to Rome by airplane.

Rome offers a lot of adventures as well as surprise to confessors of genuine Italian kitchen specialities. You can taste in local "trattorias" a lot of these meals as well as of visiting of many most famous monuments.

"Rome overcomes all your ideas and imagines" - in such way signed this place famous German poet and writer Johann Wolfgang Goethe. We can fully agree, despite the fact that there was no danger of Fiat-car collission accident at his time-period when he visited this town. As to the foundation of Rome: it is connected with mysterious legend, according to that this

powerful town was established by twins Romulus and Remus, who came here in 753 b.C. However, the reality is different, and despite the fact that the legend about twins suckled by bitch-wolf is interesting (we meet this well know picture on many places), the history of town-origin placed on seven hills is less poetic. The basic axis of town is formed with Tevere-river, its fertile banks allured first farmers who settled here. This area became later a point of disputes of immigrants and original inhabitants - Etruscs. They gave a name to a town - Ruma. It is logical base of later name - Roma. Anyway, common life of immigrants with original inhabitants brought also its fruit - new capital arose, with many buildings, we can admire now.

In 509 b.C. was founded Republic of Rome, so the original inhabitants had to leave this area for ever. Nevertheless, the monuments remained. Etruscs excelled - with their huge sense of architecture and arts, which was transferred later to rule-period of Emperors like Augustus, Nero, Traianus, Hadrianus, Marcus Aurelius, Julius Caesar and other cruel or genial sovereigns.

Shortly after chronology change, Emperor Vespasianus let built Colosseum (originally named as Flavius Amphitheatre) so a main town-dominanta as well as Roman Empire was founded. There were places for nearly 50 thousands of visitors,coming to see the first performance.  Original amphitheatre is situated on place of artificial lake in garden of Nero´s Golden House

on border of Forum Romanum, centre of all cultural-political life during Antique period. Today, you can see a lot of ruins on these places but at that time, you could find here a lot of markets, churches, basilics, marble arches and places where were stated rules of democracy. At that time, there were founded here Caracalla Termal Baths, representing with its hot and cold baths, cosmetics saloons, libraries and extensive lecture halls  the world of luxury and idleness.

Anyway, a decisive break in history of Rome became a year of 391. The Christianity, a religion, persecuted and scorned  at that time, was

declared as equivalent and unique official religion. So, new era of whole Medioeval world and town started and Rome became one of main centres of increasing Christian community. After a fall of last Emperor, this community took over the rule in town. However, the town lived through very hard periods of misery and decline as - for instamce - in 1309, when the seat of Pope moved forcibly to Avignon. Despite this important shock, Rome proved to raise a little. This has a reason for Renaissance and Baroque period? very important for European culture in general. Rome obtained its characteristic and temperament. Newly elected King of Italy chose Rome as his seat in 1871 (against desire of the then Pope). This privilege (Rome as capital) was let later in 1946, when Italy was declared as Republic. Also Vatican was declared as a sovereign state. Head of this

State there was, and it is now, a Pope. In 326, there was built Christian church there, situated above assumed tomb of St. Peter.

Vatican-Palace was build in 6th century, and since 1378 is a stabil seat of Pope. Vatican changed often (within its history) its extension as well as competences against town of Rome. Today, it became a main centre of world spiritual activities. In Vatican you find, except of many libraries and galleries, a railway station and post-office. Pope´s security is ensured by Swiss Guard Members (small

army corps, their uniforms were proposed by famous artist Michelangelo). Michelangelo is, together with other important artists, an author of decoration of ceiling paintings of Sixtina Chapel of Apostle Palace - most visited monument of Rome. Nevertheless, prints of hands of many artists of Renaissance era can be found on many other places in town. Despite the fact that the names - such as Donatello, Sandro Botticelli, Masaccio, Paolo Ucelli, Michelangelo or Leonardo da Vinci joined more with the town of Florence, the signs of their creation bears the town along Tevere-river.

Anyway, most famous architect who worked in Rome, there was Donato Bramante, charged with construction of St. Peter Basilica. He was an author of original project, the realisation of which was effected also a painter and architect of Florence-school, Raffael Santi.

If you wish to feel right atmosphere of Eternal Town, you do not avoid carefull study of history of many monuments. But do not worry, it is worth to do it. We can start our walk at  Colosseum, across Forum Romanum to further architectonical jewels, such as Traian Column or Via Appia Antica. We have to

mention big cupola of Pantheon, majestic Antique Church, situated on Baroque Piazza della Rotonda. Today´s face of Pantheon comes of Hadrianus era, rebuilt in 123 after a fire. The centre of church is formed enormous hall, covered with giant semi ring-shaped vaulted ceiling of 43 m diameter, for the construction of which a concrete was used for the first time. Except of Antique monuments, there are worth to visit the jewels of Renaissance period, which brought the town a lot of churches, palaces, and also calm gardens and majestic villas. Nowadays, these buildings are mostly used as galleries of famous authors of Italian history. Anyway, we cannot forget many

Baroque buildings and treasuries from period of early Modern Age, such as Piazza Navona (Navona Square) or famous Spanish Stages. A spine of town is formed by Via del Corso, main town-boulevard. This street is long and straight, surrounded with many narrow small streets and small squares, where you can find, except of perfect caffées, also boutiques of luxury world marks.You can walk this 1,5 kms long street from its northern end of  Piazza del Popolo (People´s Square), between churches of Santa Maria dei Miracoli and Santa Maria in Montesanto in south direction to Piazza Venezia (Venice Square). However, along this busy street there are missing important monuments, but very near you can admire such treasuries as Ara Pacis, Pantheon, Piazza Navona, Spanish Stages and especially Fontana di Trevi (Trevi Fountain).

It is a town´s symbol and a place of all enamoured people. This fountain is astonishing artictic work, with marvellous Baroque statues, cut from marble, presenting Lord of Seas, Ocean, standing on big shell, drawn by highspirited sea-horses, made by Niccolo Salvi and Gianni Lorenzo Bernini, famous Baroque architects. The construction was terminated in 1762. What about other monuments? We wish to recommend you to visit Circus Maximus (place of  horsemen´ races), monumental Neo-classical monument dedicated to King Vittorio Emanuele II. (it is greatest building of its art in Italy), church of Santa Maria Maggiore (Church of Snow Virgin Mary) or Villa Borghese - beautiful Renaissance park with first ZOO-garden (1911), where you find three museums of world importance (Galleria Borghese with Baroque and Renaissance Arts, as well

as with collection of best statues of Bernini, Villa Giulia with art of Etruscs and Villa Nazionale d´Arte Moderna with modern art). We cannot miss Castel Saint´Angelo along right bank of Tevere (former prison of Popes), one of majestic monuments of Hadrianus era.

For your evental journey to Rome we recommend you the following: would you take very comfortable and proved shoes, tourist guide and patiency. It is an advantage that a lot of monuments are placed on relatively small space, comparable with Prague city-centre, this is, taking comparison with Paris, big plus. Do not worry, the town takes its tax of your body -condition, for sure. You can gain new power during excursion by train to Ostia, suburbian place, situated at seaside, distant approx. 30 kms of city centre. Here, you can have a bath and prepare for further portions of "cultural marathon". 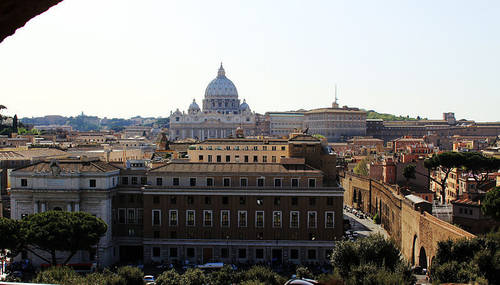 Basic information and places of interest

Roma is situated in an countryside called as Campagna di Roma. 27 kms distant of Tyrrhenia Sea. Seven hills, where the town was placed in past, name as follows:

Average altitude of this area: 37 m of sea level.

Pasta/with a sauce with oxtail

on Wednesdays at 10,30 h (prenotation necessary two days in advance).