The town of Irkutsk has 500 thousands of inhabitants and is situated in the belt of south Siberia. When you try to look for this locality in a map, which big town is in the neighbourhood of this town is placed, it could be Ulanbatar in Mongolia, distant only 500 kilometres from Irkutsk. 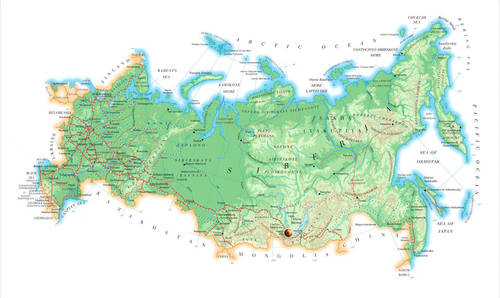 In north direction, another bigger town could be found. It is Bratsk (250 thousands of inhabitants). However, such seat does not have for us any attractive element or importance. As mentioned above, most of local ways has its finish in some points inside Siberian wilderness. So, Trans-Siberian Line forms the only reasonable line of communication, not speaking about air-traffic, famous through its quality-level, safety and first of all pilots-courage, ensnared with legends.

On the other hand, necessary highway nest is spreaded, within scope of so called Trans -Siberian Highway. Irkutsk is placed in section Nowosibirsk-Irkutsk-Tschita, whereas the distance to Nowosibirsk makes 1800 kilometres, and to Tschita 1100 kilometrs. And just M 53 Highway has sevaral faces. Close to rich Krasnoyarsk, you cannot distinguish a difference between European highway (similar to Czech D1 quality level), and, on the contrary, a section close to Irkutsk would remind rather muddy forest way, and we are situated still on mega-highway, in the middle of the way between Moscow and Wladiwostok!

Nevertheless, we cannot leave out another from such natural elements, and this is a water. The town of Irkutsk is placed along banks of Angara-river. To tell the truth, Angara is the only draining flow from Baikal Lake, 70 kilometres distant. On the other hand, this lake is rapid area for more than 350 rivers and small flows. Angara-river belongs to one of important tributaries of Yenisey-river, meeting this grand-river after 1800 kilometres route, forming central section of Selenga-Angara-Yenisey flow, 5500 kilometres long, taking the 5th place of the longest rivers of the world. Angara-river has its importance, first of all as transit-traffic industrial line of communication, giving the energy to many powerful hydro-electric powers stations, surrounded with smaller industrial town centres.

The bases of Irkutsk were established in 1652 by certain Iwan Pochabow, Cossack leader. He settled there, at right bank of Angara-river, at its confluence with small Irkut river, winter place for his suite. This place proved to be as advantageous one from strategical point of view, especially for their conquesting trips to Mongolia and China. So, advantageous position of the community, newly established merchant way and proximity of surround

ing foreign territories caused that Irkutsk got town´s status shortly after thirty years from the first camping. The town became an administrative centre of the whole area and a Governor´s seat, especially St. Innocence, Orthodox priest. This man was even Moscow - metropolita, i.e. local Church head. He expressively deserved well in Christianity extention among semi-wild aborigine Siberian people - even in distant Alaska area which belonged to Russian Empire in past. So, the original inhabitants of this area were, first of all, the Buryats - Mongolian ethnical group, carefully watching over their national traditions, habits and religion. Buryats´ Independent Republic and neighbouring Irkutsk Administrative Area form their centre at present, sharing with Baikal Lake at the same time. Inside the lake, there is to be found holy rock of Olchon Island, where allegedly powerful Gods of this small nation are settled.

Even „the Czech Hand“ wrote in Irkutsk history with its important  part, by means of writer Jaroslav Hašek. He acted there in 1920 as a member of local Sowiet (i.e. people´s council - the organization of military troops, farmers and workers). This organization became later leading force of Union of Sowiet Socialist Republic, just from Lenin´s time period. On the other hand, Hašek´s name is expressively connected with leading function of Tschuwash section, another from ethnical Siberian nations, in Red Army services. Hašek was nominated (for short time period) as a leader of 5th army - i.e. as the highest political functionary of Red Army in Siberia. However, even such message, as far as this Czech „Bohemian“ is concerned, is ensnared with many myths. Some legends exist that Hašek never visited Siberia, or he was not active from political point of view. Nevertheless, some sources say that all such actions were planned, and Hašek, obstinated Communist, would manage coup d´etat after his secret return to Czechoslovakia, from his leading position of local workers´ movement. His bad health condition

connected with his vigorous way of life took him a lot of power that he, finally, two years after his return home, retired in public life, died in his house in Lipnice nad Sázavou…

Since 19th century, the town became a certain suspension place of Dekabrists, uncomfortable persons of Tzarian Russia. These persons did their best to depose or liquidate Tzar Family and change in revolutian way local relations in the country, according to the model made during French Revoluition. Radical movements as well as tendencies fell into tragical massacres of complete Tzar Family of Nicholas I. (as mentioned in our article dedicated to Ekaterinburg). So, at the end of the 1st World War, the areas along Trans-Siberian Line were under supervision of Czechoslovak Legions. These troops worked there, first of all, as very well organized army, with a target to stop and take command of the power from Bolshewiks´ part. Anyway, even Czech Suite was finally forced to step back  against revolutionary hordes. The whole operation culminated  with assassination of admiral Koltschak, leader of Belogwardian Army - hard opponent of Red Bolshewik Guards. These troops obtained total power even over the rest of great Russian country. The Czecholsovak Legions became some personal protectors of such courageous veteran till that time period when they were recalled, by means of complicated way, via half of globe, back to freshly born Czechoislovakia. To another, however non-confirmed testimony, belongs a story of  young school boy Dwight Davide Eisenhower, subsequent USA President. Young Dwight was said to study there during a period when his father took manager position of golden mines. However, such type of information could be hardly furnished with archive documents, describing rich way of life of this hero General of the 2nd World War. In 1960, D. Eisenhower was invited to call Irkutsk again, but owing to unexpected political changes during so called „Cold War“, the visit was withdrawn.

In contradistinction to other towns of the region, Irkutsk is enriched in cultural and scientific activities, settled by Russian Science Academy (the sections of geology, natural philosophy,

chemistry and metallurgy). You can find there several Universities, theatres and museums, mostly with antropological expositions, including history of local ethnics and successive colonization of such important business crossroads. As far as the industry is concerned, the metallurgy is dominating (the production of alluminium) and small factories destined for working and mining of precious metals. Irkutsk is also an important centre of leather working factories. As a main products of local workshops (Irkut Corporation), there is a production of modern pursuing air-crafts (type Suchoy-30) and other models of mostly army machines. In Irkutsk, there are printed and issued several local and regional newspapers and magazines, including editions of local TV-studios, such as: Baikal TV, Gorod, etc. Apart of this, you can find in internet pages several referencies to town´s web-cameras systems. However,

in Irkutsk, any expressive popular sporting club is existing. Local ice-hockey team does not play KHL, and no footbal first division team has its seat there. On the other hand, so called bandy hockey is very popular there. This is quite interesting play, reminding ice-soccer with eleven players, with a diffreence that the sticks are more similar to sticks of land-hockey. The play is effected on football playground, including off-side rules or corners, etc.

As far as local sightseeings are concerned, you can find there several new built churches (it is Russian classical style of recent years), Sukachev Art Museum (with the biggest Siberian collection art). The lovers of technics can admire one of the oldest ice-brakers of the world (1900) which is ankered in the port. Regarding gastronomy, some special restaurants, are divided, in accordance to nationality minorities, dominated with offer of fish sorts of excellent quality, from Baikal Lake. Apart of this, you can visit numerous night clubs - discos with imperialistic names, such as: Broadway, Liverpool, etc.

As far as the accommodation is concerned, you can take some of private flats, offered really at very reasonable prices, as well as in cheap hostels of very good quality level, situated in city centre. Regarding excursions, the only target could be recommended to you, and it is a trip to Baikal Lake with Olchon Island in the middle. And if you would like to travel to Ulanbatar in Mongolia, you have to prepare for 36 hours´ journey. But this theme will be a goal of our next article…

Published: 19.3.2008
Baikal Lake is situated in southern part of Eastern Siberia in Russia. It is deep, dark blue lake, by Russian people named as "Holy Sea". The lake has some magic power of attaraction, beyond all description. The name of a lake means a "sea" in a language of original inhabitants of area - Buriats.