When we intend to visit Omsk, only two variants exist for realization of such idea. The first one is travelling by plane. Nevertheless, the passengers must be prepared for some small surprise, as local airport is, despite relatively higher standard of local services, rather modest, as far as Russian relations are concerned. Small arrival hall of this international airport, one belt only, bringing arriving luggage and omnipresent, and not too friendly coldness. Regarding its extent, Omsk has practically the same dimensions as Prague, including inhabitants´ number (2,2 millions). However, its contact with the rest of the world is really limited, as far as the information level is concerned. So, the second variant is, even our travelling it could be more interesting, the arrival by train. Local railway station of Trans-Siberian line is distant 2700 kilometres from Moscow, and direct train needs approx. 42 hours, in order to overcome such dístance. And, frankly speaking, there is no reason to cut your journey at any stop. Their names are not too attractive, so, no wonder that Omsk obtained a nickname „Gate to Siberia“.

The history of all towns, placed on this territory, is rather short. Originally, wooden stronghold was constructed there in 1716, created as a protection against Russian Empire in front of attacks from eagering Khyrgysians. This building became a base stone of the town. Nevertheless, Omsk obtained its fame at the beginning of 20th century, as „Siberian Chicago“. At the end of 18th century, Omsk was declared as a town. Original stronghold was surrounded with walled ramparts, the trade blew, first of all from a reason of advantageous position at the confluence of Omsk and Irtysh-rivers. So, the town became a centre of West Siberia steppe area, at the border with Kasakhstan territory. The Russian Empire was enlarged in east direction, and the importance of the town dropped, and the locality became a centre of renegades and outcasts, by the way, even F. M. Dostoyevsky, who was deported there, when 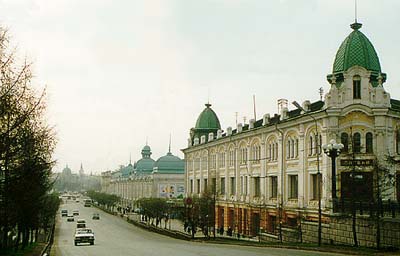 capital punishment was abolished. He was sentenced to complete forced works, for anti-Tzar revolt in 1850. To tell the truth, a connection to Trans-Siberian railway line became a salvation for the region and the town. This railway line brought bloom, first of all, for industrial areas. Many industrial factories from West Russia moved there, the consolates were opened, and trade movement developped. This town became even an important seat of monarchists during October Revolution. Here, a temporary government of „whites“, led by Admiral Koltschak, was established there (we mentioned him in our previous article, describing Irkursk). Even the Czech legionaries let there their trace, when they helped to protect golden Tzar treasure against Red Army of coming Bolshewik regime.

After creation of the USSR, a shifting of total administrative offices to the east, further to Nikolayewsk was effected (later known as Nowosibirsk, distant seven hours of drive, travelling by train). However, Omsk lost again its importance, and typical town´s rancour was made, which is lasting even till now. Anyway, a change came during the 2nd World War, when Omsk welcome an important part of West-Siberian industrial production, and this base remained there up to now. Later, since 1950, complex for petrol working was set into operation, and even now, known as Sibneft, belongs to most important companies of the whole country.

City centre preserved several important monuments from the end of 19th century, including several churches and Military Academy. So, Lenin boulevard belongs to most ostentatious streets, proud on west luxury shops, full of world brand products. You can also find there typical Czech pub „Schweik“, frequently visited with ice-hockey players, led by Jaromír Jágr, representatnt of local team of Avantgard Omsk. Karlovy Vary is a partner town of Omsk. Omsk is a town, the wealth of which is based just on petrol industry. However, this influence has its negative pages. The difference between wealth and poverty is still visible on each step. Modern city centre as well as dilapidated houses in the environs, old and damaged cars as well as new car-models move ahead along destructed roads. Everywhere you can follow a frost of poverty, in contrast with fairytale wealth.

The best tourist attraction of the town is, no doubt, the Orthodox Cathedral of Virgin Mary Assumption, situated in city centre. Here, the pilgrims can, for a fee of RBL 10 to kindle a candle for fortune. 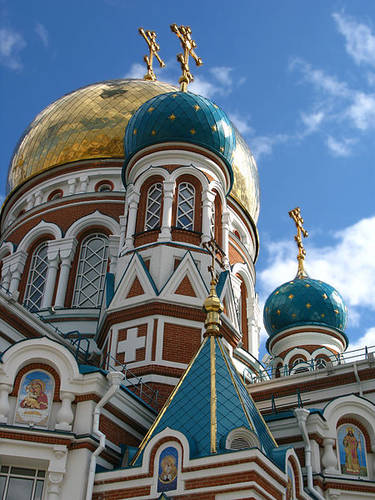 Monstrose flow of Irtysh-river belongs to unrepeatable spectacle. In winter, impenetrable ice is prevailing, whereas in summer, nice beaches and sun-burnt possibilities are available. In general, we can say that Omsk is a town of contrasts, new and old objects, dilapidated and modern, cheap and expensive subjects. All this is valid, first of all, for purchase of vodka of extraordinary quality. Nevertheless, would you try in advance, what you wish to buy, as the quality of this drink could be changed with any dollar more, you pay for. On this occasion, we wish to state here the costs, especially for transport. Air-ticket from Prague costs CZK 15000 approx. Train ticket from Moscow costs CZK 6000 The boarding in restaurants is practically on the same level as in the Czech Republic, a glass of beer costs CZK 30, and a glass of very good wodka will cost approx. CZK 90.

For the order´s sake, we add some information about local climate, which is really faddy there. The average daily temperature makes for June + 20° C, for winter months - 19° C. Anyway, the weather could be often really extreme, reaching + 40 °C in summer and - 40 °C in winter.