en.infoglobe.cz » Russia: Vladivostok – At the End of a Long Journey II

Comparison of Vladivostok with Italian Naples requires a good imagination for, as we can see from some photos, this eastern city is in no way

a typical post-Soviet city filled with grey facades and unpleasant atmosphere. Vladivostok has been always sort of a prominent city as trade flourished there. Trade was also reason for foundation of this city located along Ussuri Bay. Even long years of isolation didn’t cause a colorful life of the city to disappear from almost hundred years old boulevards line with many historical buildings. However, time was rough on these buildings as well as salty wind and lack of interest of the Soviet government to preserve anything old, overcame…

A large part of the city is situated on terraces, perhaps that’s the reason they call it Naples. But one of the most important men for the USSR Nikita Khruschev even compared Vladivostok to San Francisco. A monumental bay, Golden Hornbay is similar to

Turkish Istanbul. Today the bay is crossed with a monumental hanging bridge not accidentaly similar to the Golden Gate Bridge.

On August 1, 2012, a more than 3 kilometer long road was opened to the public, it connected the Eastern Bosporus with the Russkij Island. A monumental construction is the largest hanging bridge in the world, its load-bearing construction is 1104 meters long

. The height of its pillars is 321 meters, it makes it the second largest in the world right behind Millau (343 meters), a highway viaduct located in southern France . The whole construction cost 21 billion Czech crowns and Russians believe their money will soon return.

What to do in a city with not that many historical sights? Well, we are at one of the largest military ports in the world where are many war ships of various tonnages, types and dedications. It is worth going there. The Military Museum with its largest attraction, a renovated submarine S-56 "S 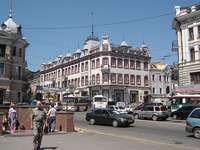 talinec", is a great starting point for your trip. You shouldn’t miss going at one of terrace hills where you may enjoy a view over the whole bay, and Golden Horn as well.

Travelers agree Vladivostok is a different kind of Russian cities. Despite it is situated in the Far East you feel atmosphere of the West there – modern skyscrapers, contemporary architecture combined with luxurious motives, and historical buildings. You can feel there pleasant atmosphere and you will feel even safe. Problems come when you have to apply for visas, buy train or flight tickets to other countries, i.e. China that is near. Communication with local authorities is

a journey to the Russian red tape reality. They are taking their time, one can’t make something without another and there is much paperwork for anything. Also they are not particularly pleasant. For instance: you need visa to lets say China, but you won’t get them unless you have a valid train ticket or flight ticket… and you perhaps know what you need for a valid ticket. Yes, visas. And you can continue on and on. Diaries of travelers are filled with similar situations; it requires courage, luck and patience. What you can do… despite all beautiful decorations we are still just in Russia.