We made a fire in the stove, made some tea and a puree for breakfast. Tom chopped lot of wood for next visitors as a substitute for supplies we had used there.

When the clock stroke 11am we left the cottage and moved off. We walked through the forest full of blueberries and every once in a while we stopped to eat some. First, we reached a nice turf lake Skrattabborrtjärnen. It was brownish; sun rays glittered on its surface and floated pond lilies. We continued along a blue tourist track and after some while we left the forest and found ourselves on the top of a rocky hill. From there we saw surrounding landscape. Stones on cliffs had reddish color and Milan pointed out that it was Scandinavian granite known as rapakivi. We moved on along a blue track towards beautiful views from the Slåttdalsberget ridge. 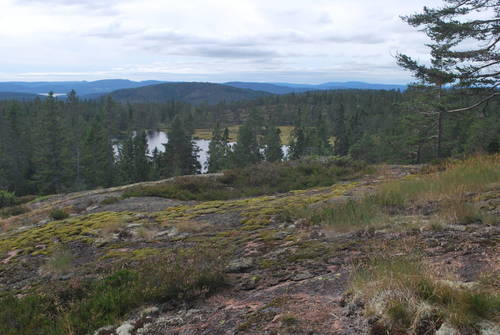 Surrounded by that reddish rock we admired views over the sea on east and large valleys of Skuleskogen on west. When we enjoyed this we descended to the valley and turned to a beautiful outlook before we entered a narrow pass. Tom take binoculars out and thanks to that we could observe distant fishing boat that drag a large number of fishing nets. We looked at a cottage by Lake Tärnättvattnen and we found out it is already inhabited by other tourists. Then we returned and walked through a narrow pass and descended to the cottage we saw few minutes earlier. Milan used local outdoor toilets and me and Tomas meanwhile gathered some water and washed our legs in a very clean lake. 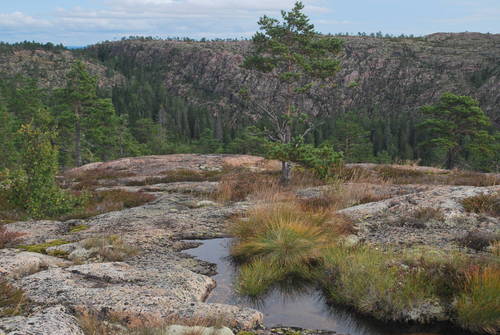 After this stop there was quite steep descent to the next cottage we saw in the map. We really found it and we were lucky no one was accommodated there. Few minutes after we arrived a German group of four arrived and they peeped inside from outside. When they found out wer are already there they tried their luck elsewhere.

This cottage wasn’t that romantic as the cottage we slept in previous night but we were glad it was there. Boys chopped again some wood and I made a fire in stove. A sea bay where boys went for a swim was located near the cottage. For me water was too cold. Later in the evening we played a crap game and soon went to our beds. 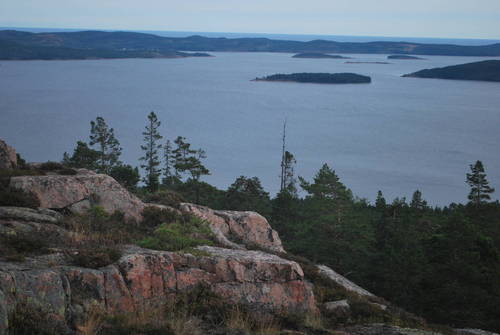 We woke up to a beautiful day in the morning. We set fire in a stove, had a breakfast and when we finally got back on a road it was already about ten o’clock. A road back led along a shore. Sometimes a beach was visible among trees. We stop at one of them and swam in the sea. Weather was so beautiful even I got into the water. To be honest, it was the most pleasant stop.

When we returned to our car we had some lunch and moved off along the E4 road. There wasn’t anything interesting on the road so there is no need to describe it. Later in the afternoon, we searched for some place to set up a camp however, it wasn’t that easy we initially thought. We found a suitable place about two hours later. But long search was worth it. It was a nice place by a lake with a wharf, places designed for tents, grill and a wooden table. We set up a camp and finally unpacked our fishing equipment. Fishing in sunset was amazing especially when both boys caught each a pike that we used for supper. We went to sleep absolutely satisfied. 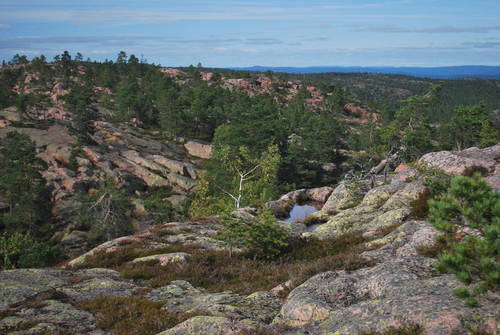