When we woke up it was so raining we didn’t want to go out of our tent. Nevertheless, we packed our things and decided to get back on a road. Rain wasn’t that heavy and it ceased from time to time so conditions weren’t that bad. 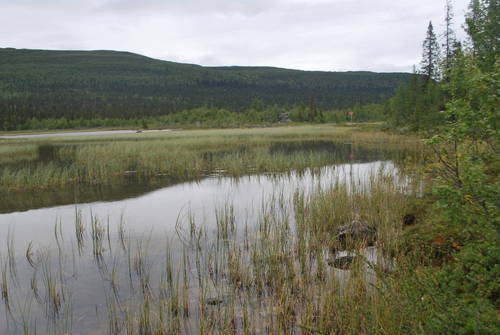 We walk through a beautiful environment but the road was, due to wet terrain, wet stones and roots, not that pleasant. Terrain was monotonous however soon our attention was captured by a view over beautiful blue lakes and mountains in background. There was snow on some peaks. We stated we feel were in Alaska or in Canadian Yukonu. U cesty rostla spousta hub, hlavně křemenáčů. U nás bychom u pěšiny neviděli ani houbičku, tady je však nikdo nesbírá. 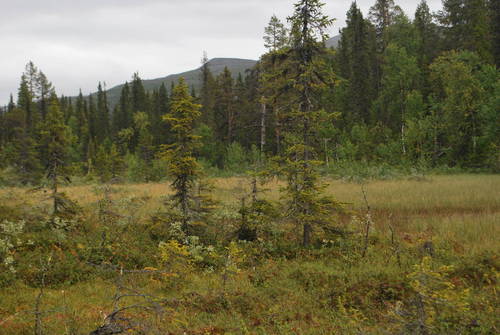 We reach a large cottage just before 6 o’clock. It was still raining and weather was unpleasant so Zuzka and I explored the building. One room was free and it was warm and dry there. We moved in thinking that staying overnight was free of charge as it was in case of the NP Skuleskogen. When we took off our wet close we smelled something fishy about the comfort of the cottage. There was even a gas for cooking. We asked about it our German fellow-residents and they confirmed what we were afraid of. A stay in the cottage was paid. If we had been members of the Svenska Turistföreninge (STF), we would pay “only” 260 SEK. But we weren’t so we had to pay more, 390 SEK, i.e. 1200 CZK! Such price was almost equivalent to some high-standard hotel. But we were already in and there was very unpleasant weather so we just accepted the price and enjoyed comfort. 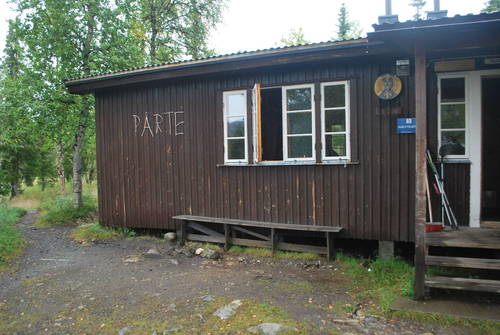 We were asked where we were from when the administrator of the cottage took money from us. We told him we were from the Czech Republic. He was happy to hear it because his girlfriend was also Czech. Soon he sent her, Magda, to us and we learned many interesting information from her. For example, this summer was unusually dry and until last week it was very sunny in Sarek, a place known for its bad weather. Also we learned that winter was longer, which explained why there weren’t so many mosquitoes. We told her while looking in a map our plan. She told us it was good and gave us advice how to make our journey quicker. She also told us about roads hidden from tourists that were used by the Sami people. She was quite critical about the Samis (Lapps), they were messy because they left PET bottles and trash in forests. Well, their attitude to nature isn’t as good as it used to be. On the other hand, they received quite privileges from the government such as fishing without a license or they are allowed to take dogs to national parks, it is forbidden for other visitors.

In the morning, we woke up in a luxurious bed but it was raining again. We didn’t hurry at all to move on but eventually we took our bags and went to Sarek…