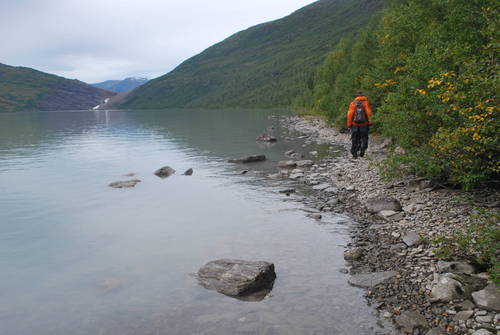 As far as we started our good old Felicia after we left it one week intact, we moved westwards across Swedish borders and entered Norway.
On our way we decided on our future destination. It was the Svartisen National Park, where the second largest glacier in Europe is located. This particular glacier we longed to see with our own eyes. We arrived to the point from where we continued to Svartisen, a glacier lake. There we faced two options what to do next. We could embark a ferry or we could continue on our own. After short hesitation we decided to walk. A road lead along the lake, it was quite monotonous and muddy however, after few hours in the car we were glad for any opportunity to walk. 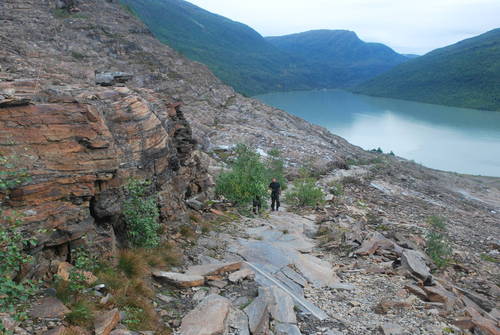 After while of walk we get out of a forest and went along the lake. The lake was replaced with a river floating from the underground beneath another glacier lake where the Svartisen glacier floats. We encountered a group of Czechs, we were not surprised we met them at all, the Czechs are just everywhere.
Water floating from the underground river made a lot of noise but it was very impressive. Well, the whole scenery was beautiful as well. Rock bedrock that had been shaped by the glacier, had very interesting formations. For a while we walked and feasted our eyes until we saw the whole glacier. Besides white there was a nice blue color. The whole glacier was full of cracks and we thought it would be quite dangerous to walk on it. The tongue of the glacier is called Austerdalsisen, there we had a snack composed of chocolate and a cookie bar. For a while we gazed on a scenery in front of us and then we returned by the way we get there. In the forest by the lake, I lost my favorite Peruvian scarf and I had to return for it. But overall, nothing spoiled our pleasant feelings there and weather was excellent as well. 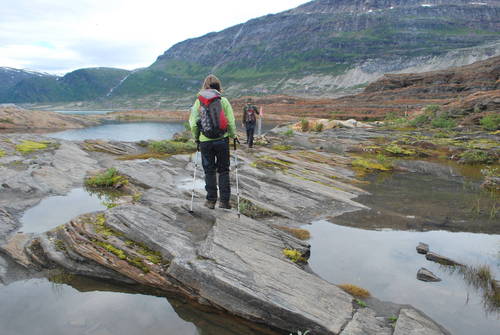 We returned on a parking lot and we pondered whether we should continue on journey in night or camp here, by Lake Svartisen. The second option won, so we prepared our little cooker, made ourselves a dinner and built tents by the parking lot. We thought somebody would come in the morning and take some fee from us, but this didn’t happen, eventually. Instead, a large camper trailer arrived and inside was a German couple. They parked right next to our Felicia. When I compared our way of travel with theirs, it was almost comical.
We packed our things and moved off to another journey, to the Norwegian shore on the Baltic Sea. 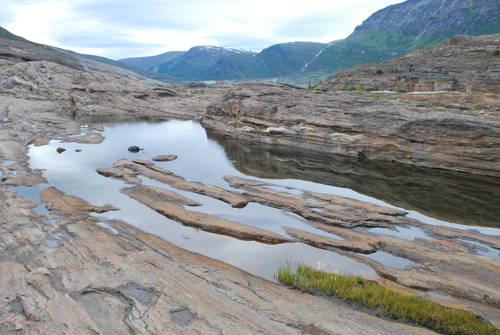