Fairy Pools would be our first stop today. We go along a rocky road along the Brittle river towards our destination. We pass by herds of sheep jumping on rocks around the river. Mountainous landscape is beautiful. This all belongs to Glen Brittle gorge. Many rivulets stream down from the mountains and flow into the river. Soon we reach Fairy Pools. These are known for their tale color. Many small and large waterfalls feed them with water which adorn the pools with various shade of blue. Cuillin, the highest mountain of Skye is close from here. We take the same road to get back to the parking lot. The walk takes maximum an hour. It is easy and gives you plentiful things to look at. 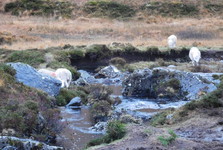 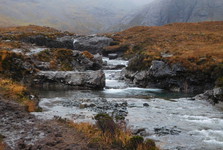 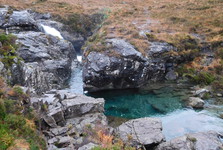 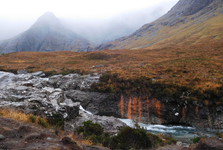 Being the most popular place on Skye, Old Man of Storr is another site we visit. Alegedly, the place is crowded in good weather. This doesn't apply to the day of our visit. The trail runs slightly uphill. Close to the parking lot, there is Old Man of Storr rising 49 meters above the ground. It is sitauted below the mountain of the same name. However, we recohnize only some shadows in the haze. Crossing stones, mud, and water streams we finally reach the peak and the pointy rock unravels before our eyes. This place must really be beautiful in good weather. At least we experience true Scotish climate. Moreover, we don't need to necessarily to follow the same route. We may join the road in other direction and make a small scenic tour. 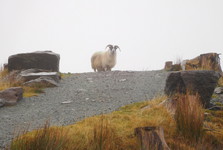 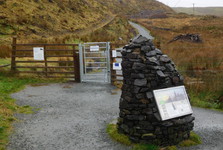 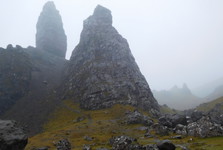 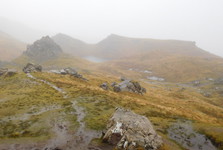 We sit inside the car and hit the road northbound to see Mealt Waterfall. This 91 waterfalls is made of basalt cliffs dubbed Kilt Rock. The name is after the the shape of the cliff resembling a kilt – traditional Scotish piece of clothing. The waterfalls feeds with water Mealt Loch lake.

We return along the same road back to Kyleakin. However, we make a break middle to our journey. Unfortunately, it still rains. We are in the port town of Portree, the largest town on Skye. What lured us in was the amazing vista over colorful houses lining the coast bringing life to this grim, rainy day. 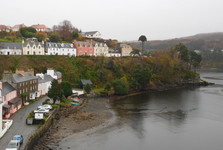 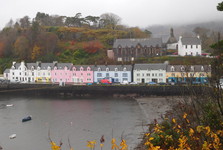 Despite bad weather, Skye island was the most beauitful place we visited in Scotland. If you plan to visit Scotland put Skye into your itinearyr.